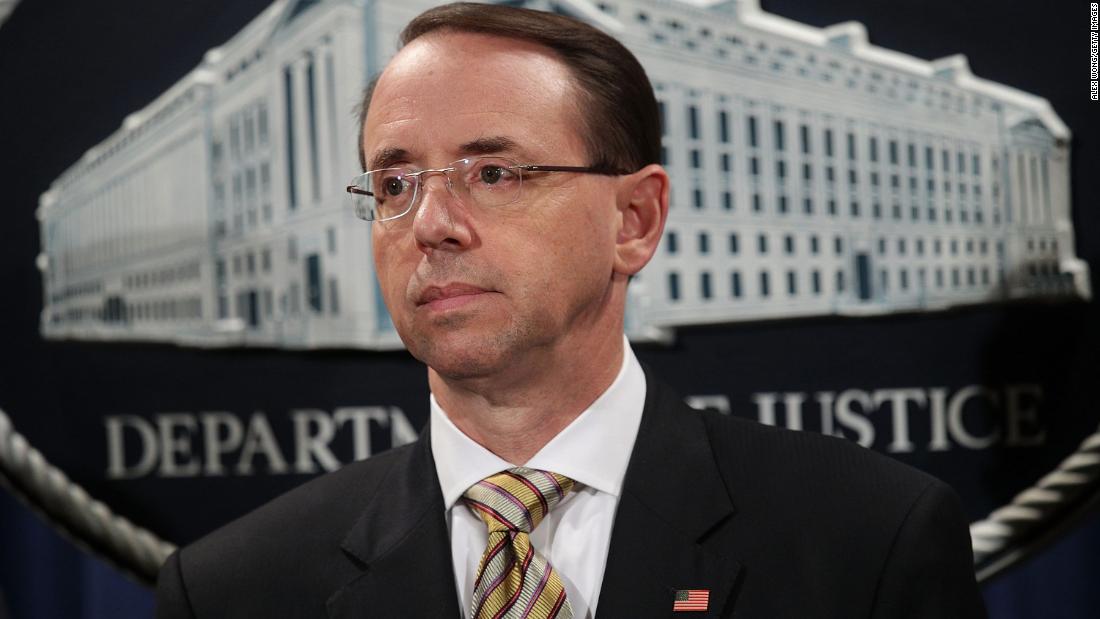 Washington (CNN)Rod Rosenstein, the embattled deputy attorney general, took a break from supervising the Russia investigation on Monday to make his debut before the Supreme Court and argue a technical sentencing guidelines case.

Rosenstein donned a morning coat that is traditionally worn by government lawyers arguing before the court as well as presidential cufflinks that were given to him last Friday by White House counsel Don McGahn.
Asked by a reporter about the cufflinks before arguments began, Rosenstein simply smiled, displayed the cufflinks and said, “Not bad,” while laughing.
After arguments he posed with his family on the iconic marble steps and then walked to his car without answering any questions.
A source close to Rosenstein said he had asked to argue a Supreme Court case last winter in order to stay in touch with the practice of the law, as his current job is largely administrative.
In the case, the justices are being asked to resolve a circuit split concerning how much explanation lower courts must provide when granting a motion to reduce a defendant’s criminal sentence.
Aduacto Chavez-Meza pleaded guilty in 2013 to conspiracy and possession with intent to distribute methamphetamine. The government recommended that he be sentenced to 135 months. After the sentencing commission amended the guidelines, Chavez-Meza requested a reduced sentence of 108 months, but he was granted only a sentence of 114. He is appealing the sentence, and claims the district court did not adequately explain how it reached its decision.
Rosenstein argued that the judge didn’t have to provide an explanation into his thinking. The judge wasn’t just “checking a box,” Rosenstein said, he was making a conscientious decision and giving the issue “appropriate consideration.”
Several of the justices appeared sympathetic to Rosenstein’s position in the case.
His argument before the Supreme Court comes as CNN has reported that President Donald Trump considered firing him after the FBI raided the offices of the President’s personal attorney. The action would potentially further Trump’s goal of trying to put greater limitations on special counsel Robert Mueller’s investigation.
Although it’s not a common occurrence, Rosenstein is not the first deputy attorney general (or attorney general) to argue a case before the highest court.