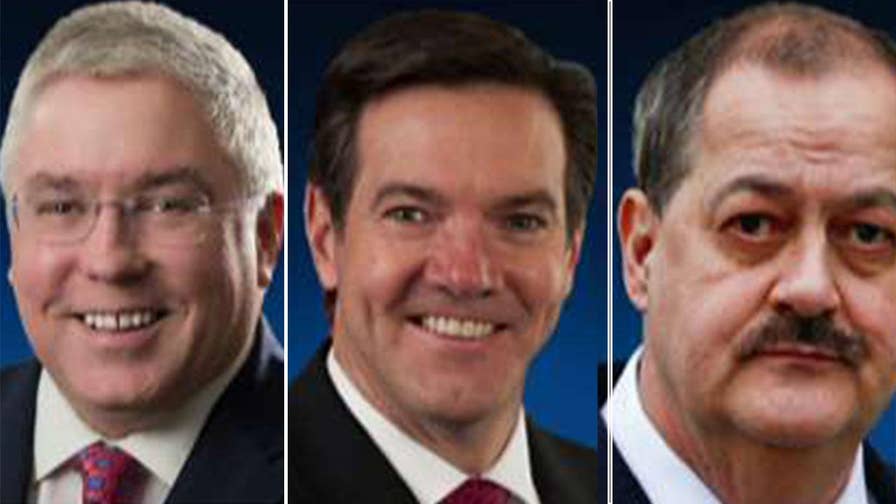 What other key races are there ahead of the midterm elections? Pollster Jim McLaughlin weighs in on ‘Fox & Friends First.’

Republicans hope that four primaries in the coming weeks will yield the kind of top-tier candidates good enough to beat at least a couple vulnerable-but-seasoned Democratic incumbents and solidify the GOP’s Senate majority. But outsider candidates and negative campaigns in two high-value targets — Indiana and West Virginia — threaten to foil GOP plans.

West Virginia Democratic Sen. Joe Manchin has been a top GOP target since at least Nov. 2016 — when Republican Donald Trump won the state with 68.7 percent of the vote.

Many voters have said they were resentful about what they called the Obama administration’s “war on coal.” But Manchin, a former West Virginia governor seeking a second full term, understands how a Democrat can win a state that has voted for Republicans in the past five presidential elections.

Still, the GOP’s chances of defeating Manchin are being confounded by primary candidate Don Blankenship, a former coal mining executive released from prison less than a year ago.

Blankenship led the company that owned the Upper Big Branch mine, where 29 men were killed in a 2010 explosion. He was sentenced to a year in prison for conspiring to break safety laws, a misdemeanor. 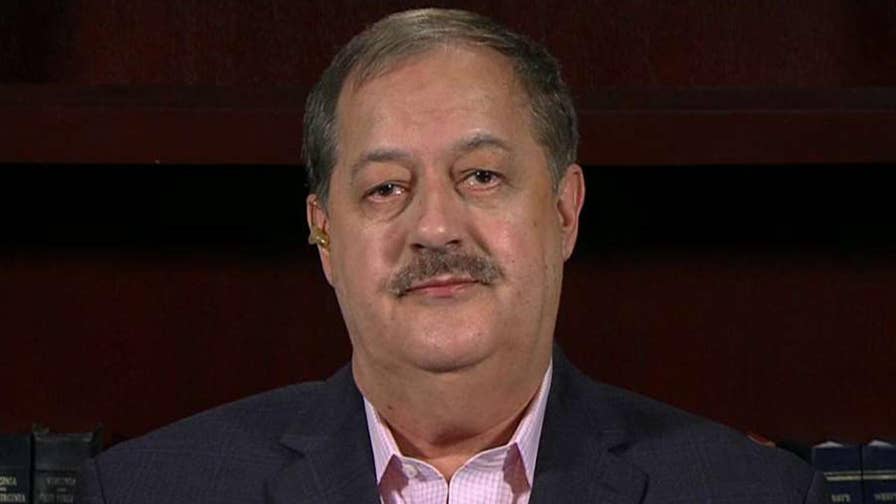 “The establishment, no matter who you define it as, has not been creating jobs in West Virginia,” he said at a recent primary debate.

Even before Blankenship emerged as a legitimate Republican candidate, West Virginia was a worry for some Republicans.

Manchin’s efforts to craft a bipartisan brand sparked talk that Trump might endorse him.

Winning in West Virginia has become increasingly important in recent months to Republicans, who have just a two-seat Senate majority that now seems less secure given signs of Democratic momentum in Nevada, Arizona, Tennessee and elsewhere.

And, if Democrats win West Virginia, they may have a slim chance at seizing the Senate majority.

Some of Trump’s most prominent conservative supporters have rallied behind state Attorney General Patrick Morrisey, a former Capitol Hill aide who was raised in New Jersey but has served as West Virginia’s top lawyer since 2013.

Rep. Evan Jenkins, a former Democrat, has highlighted his West Virginia roots and deep allegiance to Trump. Jenkins noted that Manchin missed a big chance to align himself with Trump on taxes and health care.

“The president gave Joe Manchin every opportunity in the early weeks and months of his administration to vote the right way,” Jenkins said in an interview. “He voted wrong.”

A Fox News poll released April 22 shows Jenkins holding 25 percent of the vote among likely West Virginia GOP Senate primary voters, with Morrisey getting 21 percent and Blankenship getting 16 percent. Jenkins’ lead over Morrisey is within the poll’s margin of sampling error.

Primary voters head to the polls on May 8, the same day for the primaries in Indiana, Ohio and North Carolina.

Blankenship’s supervised prison release was transferred last August to federal officials in Nevada, where he has a six-bedroom home outside of Las Vegas.

And, he recently drew attention for comments about the father of Transportation Secretary Elaine Chao, who is married to Senate Majority Leader Mitch McConnell, R-Ky.

Blankenship said he believed McConnell has a conflict of interest in foreign-relations matters, in particular those dealing with China. Chao’s father was born in China and started an international shipping company in New York.

“I don’t have any problem with Chinese people,” Blankenship told the radio station. “But I have an issue when the father-in-law is a wealthy China-person and there’s a lot of connections with some of the brass, if you will, in China.”

In Indiana, the grueling Republican Senate race has been dubbed the nation’s nastiest primary. 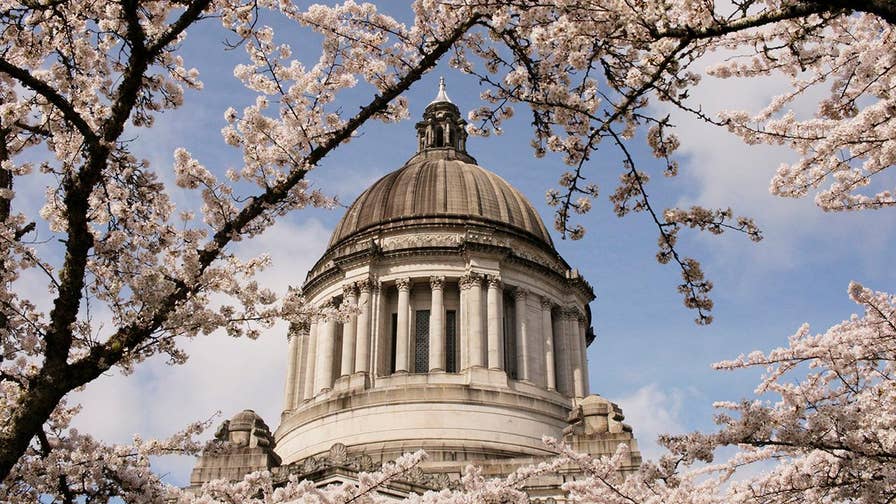 They’ve tried to appeal to Trump voters by adopting the president’s harsh immigration rhetoric and penchant for personal insults. The candidates have even channeled Trump by assigning derisive nicknames to one another: “Lyin'” Todd Rokita, “Tax Hike” Mike Braun and Luke “Missing” Messer.

As the bitter campaign slogs on, some Republicans worry the primary winner could emerge so wounded it could risk the party’s chances of taking down one of the Senate’s most vulnerable Democrats.

“This race has slowly but surely descended into Dante’s Inferno,” said John Hammond III, who represents Indiana on the Republican National Committee. “It will provide the Democrats an awful lot of free opposition research.”

Rokita’s campaign on Wednesday even released a children’s book ridiculing Messer for moving out of Indiana after his election to Congress.

“We’ve checked stores, farms and searched nearby canals. He’s probably home in Virginia with his insider pals,” reads one passage.

Rollicking debates have taken on a reality-TV aura as the candidates have torn into one another. Out-of-state living arrangements, questionable uses of tax dollars, drunken-driving convictions, voting histories and ethical transgressions — all dredged up in news stories — have provided grist for the attacks.

But with few major policy differences, they don’t have much else to contrast.

“It’s a continued race to the bottom,” Indiana Democratic Party Chairman John Zody said. “These guys are so alike on policy that the only way they can differentiate themselves is by attacking each other.”

Democrats have egged on Republicans, hoping any damage they’d inflict would help Donnelly, who has spent recent months fundraising and flying under the radar.

Throughout, the GOP candidates have fallen over each other to profess their admiration for Trump, who won the state by 19 points.

Rokita, a three-term congressman, dons a red “Make America Great Again” hat in TV ads and carries a cardboard Trump cutout to rallies. Messer, who is in House leadership, recently suggested Trump ought to win the Nobel Peace Prize. And Braun, a businessman and former state lawmaker, argues his experience makes him even more Trumpian because he’s an outsider.

Former aides have reported that Rokita berated staffers to tears, docked pay for minor mistakes and forced them to undertake demeaning tasks, like cleaning his car after a campaign driver had body odor.

He also drew scrutiny for spending $3 million in public money on self-promotion, and for doing political work on government time as Indiana’s secretary of state — a likely ethics violation.

In Ohio, the favorite in the GOP primary appears to be Rep. Jim Renacci, whom Trump recently endorsed.

He tweeted that Renacci has “worked so hard on tax reductions, illegal immigration, the border and crime. I need Jim very badly to help our agenda and to keep making America great again! He will be a fantastic senator for the great state of Ohio, and has my full endorsement!”

.@JimRenacci has worked so hard on Tax Reductions, Illegal Immigration, the Border and Crime. I need Jim very badly to help our agenda and to keep MAKING AMERICA GREAT AGAIN! He will be a fantastic Senator for the Great State of Ohio, and has my full endorsement!

Renacci entered the race earlier this year after state Treasurer Josh Mandel dropped out because of a family health issue. He faces businessman Mike Gibbons. Trump won the swing state in 2016. But the GOP primary winner will likely have a difficult time defeating two-term Democratic candidate Sherrod Brown.

A RealClearPolitics poll has a potential matchup between Renacci and Brown “lean Democrat.”

Fox News’ Chad Pergram and The Associated Press contributed to this report.