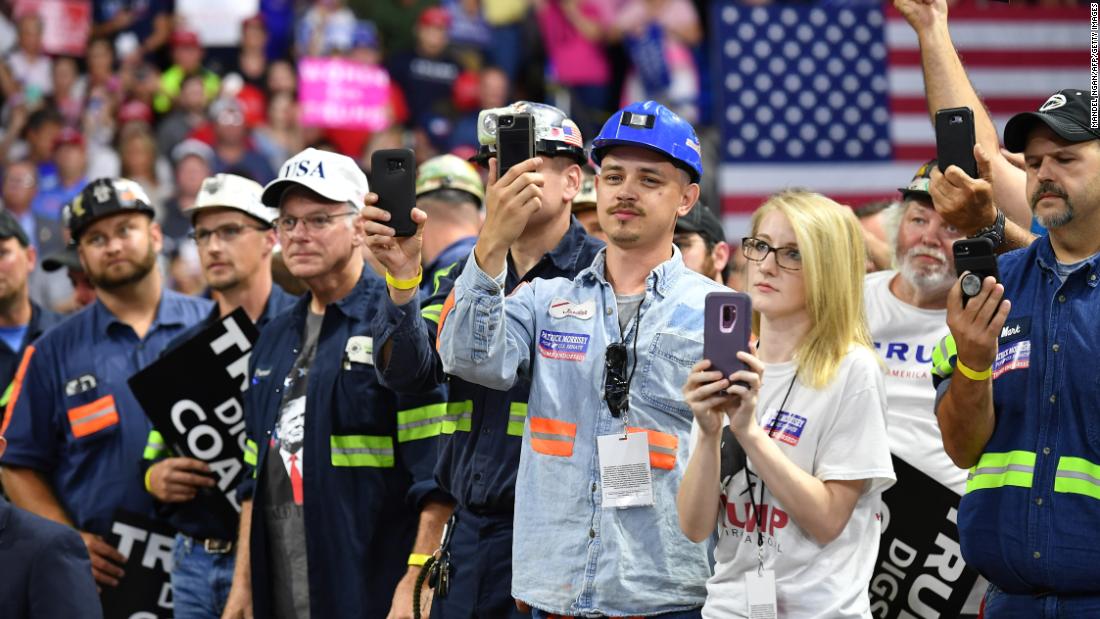 (CNN)Republicans face a host of headwinds heading into November’s midterm elections: Democratic messaging in suburban and swing districts has put control of the House in play, there is a narrow path for the party to take control of the Senate and President Donald Trump continues to fume about issues that some Republicans believe are unhelpful to their midterm efforts.

A series of studies by the Brookings Institution and economist Jed Kolko found that blue-collar jobs, an area of the economy usually associated with job loss and contraction, are growing at a faster rate than occupations in the service industry.
Bureau of Labor Statistics data found that jobs in the goods producing industries — that includes manufacturing — grew 3% from August 2017 to August 2018. That is more growth than in the service sector, which the Bureau of Labor Statistics founds grew 1.6% over the same time.
“The labor market has done well under Trump. Yet, for the most part, these gains represent a continuation of the long recovery that began early in Obama’s first term,” Kolko writes. “Still, around the edges, some partisan differences do emerge: Red states are now growing slightly faster than blue states, unlike in the Obama years. And two industries more concentrated in red America — mining and manufacturing — have rebounded notably under Trump.”
While Kolko goes on to write that these increases may not have much to do with actions by the federal government, Republicans believe that the good news could be a key part of the economic messaging that candidates running to shore up support in Trump country could use through November.
“Anytime we’re talking about the economic gains, that’s a good thing,” said a top Republican operative in Washington. “These are the segments we need to win.”
Republican operatives believe that the news about blue-collar workers adds to a range of good economic news they are looking to sell on the campaign trail. But whether or not it helps in tight races in places like Ohio, Minnesota and Michigan depends on how well Republican candidates can weaponize the economic messaging and break through the swirl of stories that dominate cable news banners and headlines in Washington, DC.
That has proven difficult for some Republicans, especially as Democrats look to link anyone with an “R” next to their name on the ballot to Trump.
“I think we overestimate how much the DC chatter breaks through,” the operative said. “People see evidence of the economy getting better with each prevailing week.”
Kolko’s findings that the uptick primarily benefits those voters who overwhelmingly — and in some cases, surprisingly — backed Trump in 2016 is backed up by Mark Muro and Jacob Whiton at the Brookings Institution.
“During President Trump’s first year in office, in fact, rural places captured a slightly disproportionate share of U.S. job growth, while the nation’s big cities slightly underperformed,” Muro and Whiton wrote. “As the elections approach, smaller, redder places are doing relatively better than they were in 2016.”
The two go on to argue that while the “political impacts of these incremental growth shifts toward redder counties will likely be modest” they will also be “temporary.”
“Cultural rage appears at this point more central to red America politics than economic soothsaying. Beyond that, both near-term and longer-term headwinds lie ahead,” they write, citing Trump’s trade agenda, which has angered some Republicans, and the cyclical nature of manufacturing jobs.

Democrats have their own issues to run on

Democrats are less certain that the numbers will save Republicans from historical trends and current political sentiments in November. Operatives across the country argue that while some economic indicators may be helping Republicans, the entire outlook — including health care, child care and other costs — will play more of a role in who swing voters back in 2018.
“We can look at polls and economic projections until we are blue in the face. But it’s about what people feel on the ground,” said a Democratic staffer working to reelect a member in the Midwest. “People are making minimum wage when they used to make 30-40 bucks an hour. They’re losing pensions. Their health care is either too expensive or doesn’t cover anything. People in places across the Rust Belt don’t feel it.”
A top Democratic operative in Ohio echoed that sentiment, arguing that while some economic indicators are strong, the holistic look at the economy does not bode well for Republicans.
“I don’t know that blips in specific sectors, while important, are going to have this overarching effect on the election,” the operative said. “It is especially blunted by health care costs and prescription drug costs. Those are now the top things that people see as barriers to being able to put money away for savings and get ahead.”
Questions remain, however, about whether Trump will get credit for the economy. While Trump has looked to tout the economy — regularly telling crowds at rallies about unemployment numbers and stock market growth — Democrats have tried to focus on health care, education and the Republican backed tax bill, an acknowledgment that focusing strictly on economic indicators is not a winning issue for them.
And some Democrats — including former President Barack Obama — have tried to argue that the strong economy is actually because of his eight years in office, not the last 22 months. Goods producing jobs also grew at a rate of 3% over 12 months during his administration.
“When you hear how great the economy is doing right now, let’s just remember when this recovery started,” Obama said during a stinging speech against Trump on Friday. “I am glad it has continued but when you hear about his economic miracle that has been going on, when the job number comes out and suddenly Republicans say it is a miracle, I have to kind of remind them, actually those job numbers were the same they were in 2015, in 2016.”
Democrats believe that some Trump voters are eager to give him credit and will therefore reward him for the positive economic indicators. But it’s those voters on the bubble, some of whom may have voted for the President in 2016 but backed Obama in previous elections, who will decide key races in 2018.
As one top national Democrat operative put it bluntly: “If the economy were bad, this would be a blood bath.”