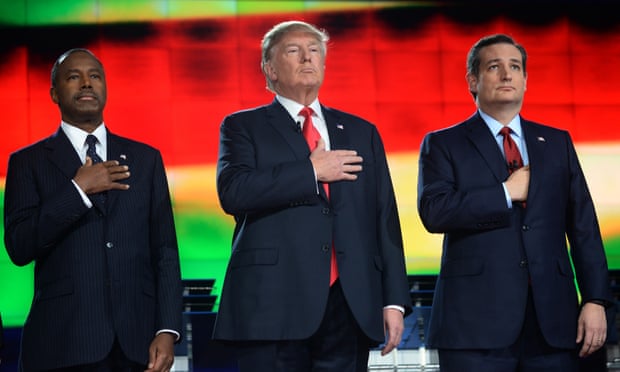 A poll on Friday by Public Policy Polling perfectly encapsulates the Republican presidential race so far: 30% of Republican primary voters nationally say they support bombing Agrabah. That would be the fictional country in Aladdin.

Republican voters, advised on by the Republican nominees, are now eager to bomb anywhere that has a Muslim-sounding name regardless of whether it comes from a cartoon. While the poll itself may be amusing, its not exactly surprising given the cartoonish high levels of tough-guy militarism that spews from the mouth of every Republican nominee as they try to one-up each other on who would start more wars harder and quicker.

Ted Cruz has expended the past two weeks calling for a carpet bombing of the Middle East in an attempt to destroy Isis, “says hes” wants to see if sand can glow in the dark. He defended this bellow on national television Tuesday while outright avoiding the question of whether that means hes prepared to kill the hundreds of thousands of civilians that live in Isiss de-facto capital of Raqqa, Syria.

Donald Trump, in between his calls for banning Muslims here at home, also called on American forces to commit war crimes by killing the families of terrorists. His meaningless calls to bomb the shit out of Isis naturally have led all the other nominees to trip over each other in an attempt to find more and more colorful adjectives to describe how their bombs would look.

Chris Christie, whose whole campaign seems based around trying to sound like he could beat the other nominees up for their lunch money, was perhaps the most absurd: he threatened war with both Russia and China during the last debate. Christie claimed he was totally willing to start a third world war with Russia over a no-fly zone in Syria and would shoot down Russian pilots immediately. His reason? To avenge the thousands killed by Assad, and the millions running around the world, running for “peoples lives”. So Christies stance is: we will start the third world war to save Syrians, but we draw the line in at allowing five-year-old Syrian orphans into the United States.

Lost in the lunacy of the rest of the debate where nominees were calling for carpet bombings, the killing of civilians and games of chicken with the worlds largest nuclear power was also Christies call for all out cyberwar with China. Apparently under a Christie presidency, the US would immediately respond to any hacking by the Chinese government has done by doxxing the entire country, basically turning the United States government into Anonymous: What we need to do is go at the things that they are most sensitive and most embarrassing to them; that theyre concealing; get that information and put it out in public. Im always for more government transparency, but the chances of this spiraling out of control and leading to actual war is hard to overstate.

On top of all this, its such a foregone conclusion that many of these candidates will merrily rip up the Iran nuclear bargain and send us down a track of war with them that hardly anyone even asks them anymore.

Council on Foreign Relations Micah Zenko has a handy chart where he is tracking all the people and places each presidential nominee has said he or she wants to bomb. He reminds us that Ben Carson has not only promised all of the above, but to also unleash droning strikes in Mexico.

Its worth noting that Democratic frontrunner Hillary Clinton is just as militaristic, or more so, than most of the Republicans when it comes to Isis and Iran. She has at least refrained, however, from calling for a third world war with Russia or launching droning strikes in Mexico.