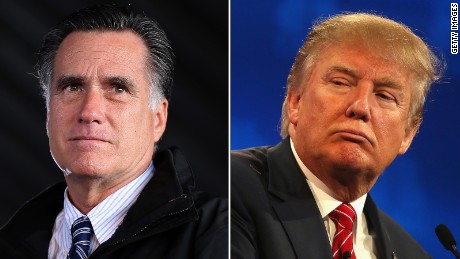 (CNN)One year ago the question hovering over Park City, Utah, was which presidential candidate could capture the hearts of Mitt Romney’s friends.

Less than a week later, Donald Trump said he was running for president and made them his enemy. And he beat them.
Now, with Trump as the GOP nominee, those same Republican fundraisers, business titans and longtime friends of Romney are back to huddle far from Trump Tower.
Attendees caution that Romney’s annual summit — The Experts and Enthusiasts, or E2, retreat — is not an exclusive conclave for the #NeverTrump movement. Yet it is the closest thing to a safe space for conservatives who agree that Trump is not a Republican in the mold of their 2012 Republican nominee, who remains revered by associates.
Romney, who has criticized Trump at every turn, will brief his allies in a highly-anticipated, even if brief, set of remarks Thursday evening.
Two Republicans who have been the most uneasy with Trump’s ascension: House Speaker Paul Ryan, who just endorsed Trump last week, and Nebraska Sen. Ben Sasse, who has refused to, will speak, their offices confirmed.
Anti-Trump donors, ranging from tech CEO Meg Whitman to associates of hedge funder Paul Singer, are expected to make the rounds, sources said. Representatives for Whitman and Singer didn’t comment.

Advisers don’t expect Romney to evangelize against Trump in public, but the lineup of Trump foes is almost sure to send a signal.
“Mitt is pretty easy to read,” said Stuart Stevens, Romney’s top strategist in 2012 who is set to attend his first E2 summit this year. “Everyone sort of knows where he is.”
But at question is how aggressively Romney will cajole his associates in private: Romney’s large universe of friends includes high-powered bundlers like New York Jets owner Woody Johnson, a top Romney fundraiser now doing the same for Trump, and restaurateur Andy Puzder. And working the halls this weekend will be Arkansas Sen. Tom Cotton, his office confirmed. The first-term senator has signaled a comfort with his Trump as the party’s presumptive nominee, and is himself subject of considerable 2020 speculation.
Unlike last year’s summit, highlighted by speeches from a half-dozen presidential candidates under the klieg lights of media scrutiny, this year is shaping up to be a more staid affair,with foreign policy elder James Baker, who met with Trump privately last month,along with former Obama Defense Secretary Leon Panetta on scene. Republican National Committee Chairman Reince Priebus will also be there, the RNC confirmed.
“It’s more of what it was supposed to be in the beginning,” said Ron Kaufmann, a Romney confidant. But given how close the summit comes to Tuesday’s crystallizing final primaries, the senior Romney adviser conceded that the media will nevertheless “have a field day.”
Unlike other Republican elders, Romney has indicated no willingness to soften his antipathy toward Trump, actively trying to recruit a third-party challenger to upstage Trump’s takeover of the GOP. He has pledged to write in a name should his like-minded allies fail to successfully draft one.
That name, his advisers say again and again, will not be him. But many are curious about just how far he will go to stop Trump in November: Will he instruct some of his fundraisers to stay far from him? Will he stump for Senate candidates who repudiate him? Will he warm toward an existing third-party candidate like Libertarian hopeful Gary Johnson?
“We’d be lying if we told you there wasn’t a lot of interest in what his plans might be,” said one person familiar with the event, who described Romney as “very distraught.” “We’re interested to see his disposition, his temperament.”
Also under the spotlight will be Ryan, Romney’s former running-mate who ended an agonizing, public deliberation about whether to back Trump last week with a tepid, low-key endorsement.
Matt Waldrip, the lead organizer of the conference and a former Romney finance hand, said he hoped the event would transcend the political moment and focus on bigger-picture topics like business innovation. Politics, though, will be hard to escape.
“We’ll hear from various viewpoints on what it means to be a Republican,” Waldrip said. “People will make a big deal of that, but that’s not a new debate.”