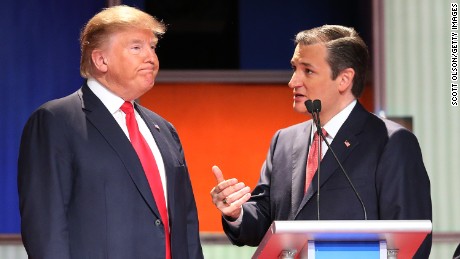 Las Vegas (CNN)The bitter battle between Donald Trump and Ted Cruz escalated Thursday, as prominent members of the GOP fought over which one of them would do more damage to the Republican brand.

For months, the two Republican candidates have sparred over who could rightly claim the mantle of party outsider. But with some Republican leaders in open revolt against Cruz as he has surged in Iowa, Trump is pivoting to an argument that he is more electable than Cruz — suggesting that Cruz’s abrasive personality makes him unfit for the presidency.

The Texas senator’s image as a strident party pariah, Trump said in Nevada Thursday, would cripple his ability to “make deals” and govern effectively. Noting that not a single one of Cruz’s Senate colleagues has endorsed him, Trump questioned not only whether Cruz could negotiate with members of Congress, but whether he is capable of relating to people at the most basic level.

“It’s one thing to be like a very tough guy — we’re all tough people — but you’ve got to be able to get along a little bit with people. You can’t be so strident,” Trump told the crowd at two raucous events in Las Vegas. “He can debate, but he can’t talk.”

Dismissing Cruz’s recent line of attack that he has accepted the embrace of the establishment — “Give me a break,” he scoffed — Trump highlighted the comments earlier this week by former Kansas Sen. Bob Dole, who warned that nominating Cruz would lead to “wholesale losses in Congress” and other down-ballot races.

Alluding to Dole’s statement to the New York Times interview that Trump has the “right personality” to work with Congress, Trump played up his reputation as a deal maker as the underpinning of his electability argument: “We’ve got to be a little establishment,” he said in Vegas. “We’ve got to get things done.”

Across the country in New Hampshire, Cruz told reporters that Trump was getting “more and more riled” up as Cruz’s campaign has surged in the polls.

“Each day, he’s engaging in more and more personal attacks,” Cruz said after speaking at the New Hampshire Institute of Politics “Life of the Party” forum. “I have no intention of responding in kind. I like Donald Trump. I respect Donald Trump. I will continue to praise him personally.”

He repeated his somewhat dubious assertion that the Washington establishment is “rushing” to get behind Trump — specifically highlighting Trump’s past friendships and political alliances with Democrats.

The conservative establishment, however, shows no sign of rallying around Trump.

In a press conference, Trump brushed off the National Review’s criticisms, calling the magazine a failing, irrelevant publication.

Cruz also sought to use Dole’s comments to his advantage. In an interview with the Boston Herald Radio Show earlier Thursday, he said the establishment is “terrified of a President who won’t go along to get along.”

The back-and-forth between Trump and Cruz came on a day when a new CNN/ORC poll showed Trump with a commanding lead in Iowa after weeks in which the two men have been within the margin of error in many polls.

“He had his moment and he blew it,” Trump said of Cruz in Las Vegas. “He looks like a nervous wreck…. He’s going down.”

Though the latest polling data suggests that no candidate other than Cruz is within striking distance of Trump, the brash New York candidate could not resist a fresh round of withering attacks on Jeb Bush Thursday.

Calling Bush “a lost soul,” Trump mocked the lavish spending by his campaign and the political committees supporting him — pointing to Bush’s stubborn position in the low single digits in the polls.

“This guy, he’s a maniac,” Trump said at his rally in Las Vegas. “He’s not even on the scale — these people, we’ve got a bunch of real dummies.”

Trump assured the crowd that if Bush stopped running ads against him, he would leave him alone. “Jeb is down the toilet,” he said, “and Ted is starting to go down.”

Trump continued his efforts to burnish his conservative credentials Thursday, touting his endorsement from Sarah Palin (without whom, Trump asserted, Cruz never would have won his U.S. Senate race). Later in the day, he appeared at the Outdoor Sportsman Awards, which are held in conjunction with the National Shooting Sports Foundation’s annual trade show.

During his evening speech, he vowed to fight for Second Amendment rights as President.

“The Second Amendment is 100% protected. 100%,” he said on stage at the Venetian Theatre. Introduced by supporter Willie Robertson of A&E’s “Duck Dynasty,” Trump was flanked by his two sons, who he described as avid outdoorsmen. He told the crowd he shared their passion, but did not get “outdoors” as often as he would like because he works so much.

“They are trying to take away so many rights,” he said. “I think you’re going to be very, very happy with a President Donald Trump.”

The drumbeat of establishment attacks against Cruz continued in Washington on Thursday as a number of prominent Republicans try to slow Cruz’s momentum. A number of current and former lawmakers are echoing the criticisms of Cruz voiced by Dole and Iowa Gov. Terry Branstad, who urged voters this week not to support Cruz because of his position on ethanol subsidies.

“I think we’ll lose if he’s our nominee,” Utah Sen. Orrin Hatch told CNN’s Manu Raju. Hatch, who is supporting Bush, said Cruz has not demonstrated his ability to appeal to moderates and independents: “We can’t just act like only one point of view is the only way to go. That’s where Ted is going to have some trouble.”

South Carolina Sen. Lindsey Graham, who backed Bush after bowing out of the race, framed the choice between Cruz and Trump during a press conference Thursday: “It’s like being shot or poisoned.”

Trump, Graham said, “is the most unprepared person I’ve ever met to be commander in chief. And when it comes to Sen. Cruz, he’s exhibited behavior in his time in the Senate that makes it impossible for me to believe that he could bring this country together.”

When faced with a decision between the two men, Graham said: “What does it really matter?”