Remember that Kendall Jenner Pepsi ad that suggested you could solve police brutality with a cold refreshing soft drink? How about the recent Super Bowl commercial wherein Ram Trucks uncovered the hidden secret that a famous Martin Luther King Jr. speech was actually about buying a Ram? Both were widely mocked, which makes it seem like we don’t fall for manipulative advertising anymore. But brands have realized this, and are taking advantage of a huge blind spot to hide their sketchy practices.

6 Famous Directors Who Were Deranged Creeps On Set

Their solution is simple: Be quirky and fun. If you’re an active Twitter user, you may have noticed that the official Wendy’s account has become hugely popular by joking around, insulting other brands, and generally doing their best to act like a hip 20-something who also happens to be the faceless representative of a multinational junk food titan. For example, they got 25,000 likes and retweets for telling someone who went to McDonald’s to “get a McRefund.” It might not seem that clever at first glance, but when you consider that most fast food advertising is basically “Our burgers are cooked!” it’s practically Mark Twain.

They’ve reached the point where people tweet at them in the hopes of being insulted, because the future is far sillier than science fiction could have predicted, and their efforts have not gone unnoticed. BuzzFeed recently wrote “The Person Who Runs Wendy’s Twitter Deserves A Raise Because These Tweets Are Gold.” Mashable has, ugh, “25 Wendy’s tweets that served a double shade burger in 2017.” And goddamn Fox News found them newsworthy in their hard-hitting “Wendy’s roasts McDonald’s over Black Friday Twitter mishap” expose. Wendy’s even did a successful Reddit AMA, which Thrillist declared to be “Savage AF.” It seems our bar for hard-hitting comedy these days is one massive corporation that only sees you as a sack of flesh to stuff chicken into saying something a little mean about another massive corporation that feels the same. 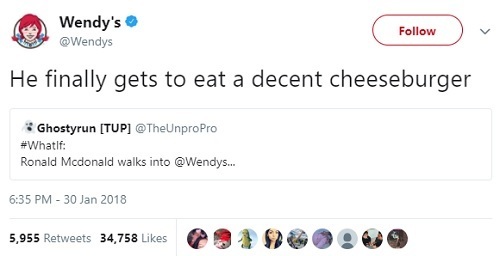 So brands have figured out that if you’re funny online, you’ll earn free fluff news stories (also known as ads). Even some people who spend most of their time tweeting anti-capitalist screeds will pause to appreciate Wendy’s making fun of McDonald’s. But weirdly, the Wendy’s Twitter account doesn’t have much to say about Wendy’s dodging American labor laws by getting their tomatoes from Mexican farms that systematically employ child labor, wage theft, beatings, and other abuses. It’s tricky to cram the fact that The LA Times compared the workers that Wendy’s profits from to slaves into a 280-character zinger. Although a man volunteering to take a beating that was about to be given to a woman who had the audacity to ask for a little food for her starving children is certainly “savage AF.”

That’s how companies advertise to people who consider themselves too sophisticated for advertising. Just act exactly like everyone else does online, except for the part where you’re complicit in widespread human rights violations and really don’t want to talk about it. The most devious part is that Wendy’s is targeting young adults, the same demographic that will retweet articles about how fast food workers deserve raises and then like a Wendy’s post 20 seconds later. It’s an endless churn of content that drops your guard, because it’s hard to think about human rights issues when you were looking at a cute hedgehog just a moment ago.

The other tactic to watch out for is brands trying to inspire you in the vaguest, most inoffensive ways possible. Heineken racked up nearly 15 million views and dozens of fawning headlines for their “Worlds Apart” campaign, which featured people with different political views bonding over the construction of baby’s first IKEA project and the chilled cat urine that Heineken calls beer. A man who’s critical of feminism works with a staunch feminist, and someone who doesn’t understand the need for transgender rights learns that, gasp, he was working with a trans woman! They talk things out, because Heineken found reasonable people instead of total monsters, and we get some vague platitudes about how deep down, we’re all the same, and less deep down, we all loooove Heineken. Huffpost called it “a beautiful blend of beer and politics,” The AV Club said that “Heineken accomplishes what Pepsi couldn’t,” and it was widely praised on social media.

But it was a little ironic for Heineken’s ad to feature a feminist wearing a “Smash the patriarchy” shirt, considering that Heineken employs women as beer sellers in Cambodia, but severely underpays them to the point where many are forced to double as sex workers practicing unsafe sex to feed their families. Heineken also does nothing to protect them from rape and violence in their workplaces, among other issues. They’ve also been linked to severely underpaid workers in South Africa, and oh yeah, their money has been tied to brutal civil war in the Congo, including a politician who was found guilty of war crimes and crimes against humanity. It’s nice that they brought a climate change denier and an environmentalist together to build a chair, though.

So remember that whenever a company sends a quirky tweet or releases an inspirational video, they’re trying to make you think and feel something. Often that something is only “Hey, I just realized I haven’t had Burger King in a while,” but sometimes they want you to think anything other than “Hey, didn’t I read about Wendy’s being complicit in abject human misery recently? Maybe I should eat at my neighborhood sub shop instead.” There’s nothing inherently wrong with corporations trying to engage people in creative ways, but letting companies off the hook for exploitative practices and praising their “hilarious” wit because they really zinged @weedboner69 doesn’t jibe with the whole “too smart to be manipulated by advertising” attitude that we’re supposed to have these days.

Mark is on Twitter and is trying to sell you his new book right now.

And look, we know Wendy’s does some decent charity work. It’s just important to remember that Raggedy Ann up there is still a symbol of profits > people.