Loosely based on a true story, this gripping show puts a different spin on the narco drama and the main character is a Latina MacGyver, but with better hair 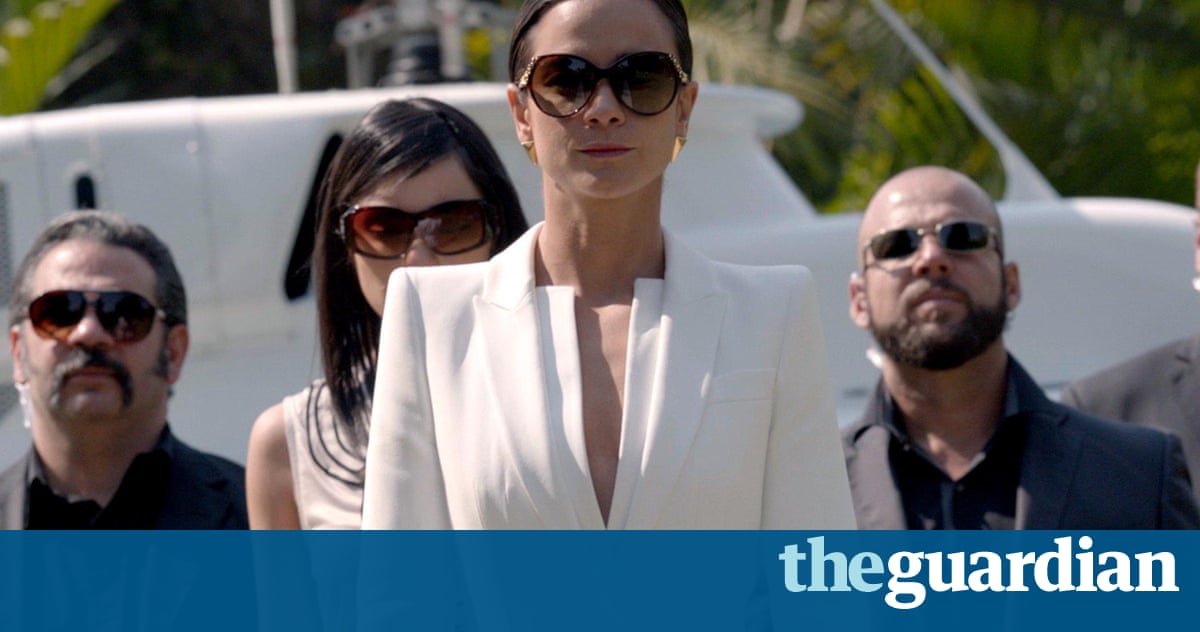 Whats the name of this show? Queen of the South

When does it premiere? Thursday 23 June at 10pm EST on USA

What is this show about? Teresa Mendoza (Alice Braga) starts off as a lowly money changer in the Mexican state of Sinaloa but rises to run a drug cartel of her very own.

So its like lady Narcos? Yeah, kind of, but thats a little bit reductive. This series is based on a popular telenovela La Reina del Sur, which aired on Telemundo, which is itself an adaptation of a Spanish novel by the same name by Arturo Prez-Reverte. The book is based on the life of drug trafficker Marllory Chacn. So, yes, like Netflixs excellent Narcos, about the life of Pablo Escobar, it is a narco drama based loosely on real events, but the spirit of the endeavour is different.

What happens in the first episode? We first meet the wildly successful Teresa as she gets gunned down in her immaculate mansion. The action flashes back to her earlier years when she first meets a drug runner and falls in love, elevating her social status considerably. When her boyfriend steals from the head of his cartel, Don Epifanio (Joaquim de Almeida), he ends up dead and Don Epifanios men are after Teresa to tie up any loose ends. She takes the money, cocaine, gun and mysterious notebook he gave her and takes off to try to save her life.

Is there a lot of action? Eventually. At first there is a lot of exposition about who Teresa is and her place in the cartel, which is made even more egregious by a voiceover, which is, coincidentally, also the worst aspect of Narcos. However, once the pursuit begins its one near miss after another. Teresa runs, hides, blows up some cars, shoots a few dudes and does just about anything to escape. What makes her fascinating to watch isnt the kinetic movement (which is well-shot in gritty hues), but seeing her try to get herself out of sticky situations using her limited resources. Shes like a Latina MacGyver, but with much better hair.

Is it any good? Its quite good, actually, but viewers will have to give it a little bit of time. At first the show seemed clumsy and silly, with Teresa butting her head into the Dons business and eavesdropping on a fight between him and his wife, the ruthless Camila (Veronica Falcon). Then shes lying in a tub watching Scarface on television, and its just a little too on the nose. It seemed like it was trying to be smart and edgy and failing miserably.

Next thing you know, youll be sucked into Teresas story, not only because shes literally fleeing for her life, but also because there hasnt been a character quite like her on television before. Its easy to say that she is a female Walter White, but their motivations are entirely different. Every male antihero on television (and there have been more than Donald Trump has bankruptcies) is compelled by mostly selfish reasons, especially White, who says hes cooking meth to help his family but hes really doing it to feed his own ego.

Teresa, on the other hand, is forced into this situation where she has to be deadly and conniving as a matter of survival. She is the victim of a system where she can only prosper by aligning herself with a man, but that alliance also leads to her destruction. Who can blame her for fighting back? We root for her as an act of defiance against the system that created her. Teresa is the aggressor, but she is also the victim and its a fascinating dynamic to watch.

Only the first episode was made available for critics, so its hard to judge what Queen of the South is going to look like as a series, but the pilot is one of the best Ive seen in quite some time.

Doesnt USA usually just make dumb procedurals? Yes, in the past they were known for shows like Burn Notice, Psych and Royal Pains, but with the premiere of the critical hit Mr Robot last summer, its offering darker, more ambitious fare. Queen of the South isnt an obvious home run like Mr Robot (especially when only judging one episode), but it shows that the development team at USA is serious about their new direction and doing a great job picking projects.

Whats wrong with the show? The biggest problem is the use of Spanish. The characters almost always speak English, which is unrealistic, but, lets face it, American audiences are far too lazy to watch something with subtitles. However, occasionally the characters lapse into Spanish for words, phrases or full sentences. There is no rhyme or reason as to why they use their mother tongue and having the mishmash of the two languages doesnt make it seem more authentic it just alerts the viewer to the fact that they should be speaking in Spanish the whole time.

Is there anything else that is great about the show? At several moments I noticed how wonderful the pulsating electronic score is and then noticed in the end credits that its by musical pioneer Giorgio Moroder. Thats just the icing on the cake.

Should I watch this show? Yes, you should. Its ambitious, different and captivating, even if just for the first hour. How the rest of the season will shape up is anyones guess, but if potential was cocaine, this show would have mounds of it piled up on the coffee table.

As Sands Through the Hourglass, So Days of Our Livesand Our Other Daytime SoapsShould Not Die