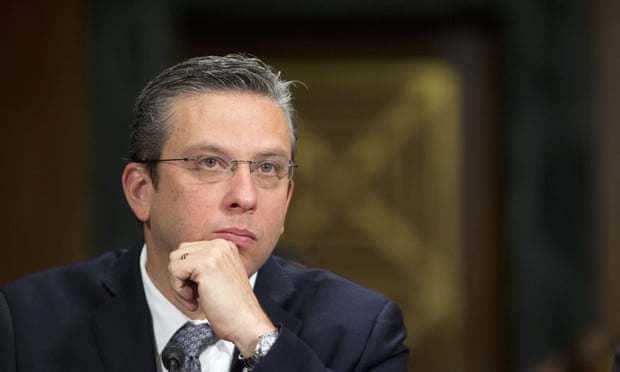 Puerto Ricos governor, Alejandro Garcia Padilla, told the US Senate on Tuesday that the troubled Caribbean island has no cash left and can no longer repay its $72bn debts.

The territory announced it would honor a $354m debt payment due on 1 December as Padilla was testifying, but Padilla said austerity measures had not only eaten into essential services but caused tax revenues to crater. With more than $900m due in January, the governor said his options were restructuring or disaster.

Padilla gave the Senate a deadline of Dec. 11 to provide Puerto Rico a viable restructuring plan.

The consequences of a default without any legal framework to restructure our liabilities are so disastrous that for the past six months we have been executing emergency measures to continue meeting our obligations with our creditors and avoid a disruption of essential services to our citizens, Padilla said in a prepared statement. These emergency measures are unsustainable.

Face to face with the Senate judiciary committee, however, he was more blunt: Absent an orderly process, [the defaults] effects will be catastrophic. That is why, starting today, the commonwealth of Puerto Rico will have to claw back revenues pledged to certain bond issues in order to maintain essential public services. We have taken this difficult step in the hopes that Congress will act soon, but let us be clear: we have no cash left.

The troubled territory, where 45% of its 3.5 million population live in poverty, looked almost certain to miss its latest debt payment on Tuesday as the US Congress discussed ways to save Puerto Rico from being crushed by its $72bn debt.

We need a restructuring process that is fair to all stakeholders, lowers electricity rates and promotes economic growth, Padilla said. Electricity costs more than twice the national average per kilowatt-hour in Puerto Rico.

Todays debt service payments reflect our commitment to honor our obligations notwithstanding the extreme fiscal challenges we face in an effort to facilitate a voluntary restructuring process with our creditors, said GDB president Melba Acosta Febo. However, make no mistake, Puerto Ricos liquidity position is severely constrained at this time despite the extraordinary measures the government has taken to improve it.

That claw back would affect debt not backed by Puerto Ricos constitution (as the general-obligation bonds the islands central bank repaid today were). In August, the government development bank (GDB) defaulted on debt issued by the Puerto Rico Finance Corporation, a subsidiary of the GDB with limited obligations to its shareholders.

The US territory is not technically a state and unlike other municipalities, notably Detroit, it cannot find debt relief through bankruptcy under American law. Detroit and other US cities, have been allowed to restructure their debts under Chapter 9 of the bankruptcy code.

Richard Ravitch, former lieutenant governor of New York, told the hearing that $3bn in Puerto Rican bonds were issued at more than 9% interest an investment he characterized as very risky under the best circumstances. Without bankruptcy protection, he said, there would be endless, acrimonious litigation in the courts in New York and in Puerto Rico and a liquidity crisis.

Stephen Spencer, managing director of Houlihan Lokey in Minneapolis, Minnesota, said the comparison to bankruptcies in other municipalities, notably Detroit, distressed him. Detroit wasnt a bankruptcy, it was a stickup, he said. There are fundamental creditor protections that are not there in Chapter 9.

Puerto Ricos liberal-leaning politicians who today are hosting Hillary Clinton in San Juan have taxed and spent too much, wrote Rubio, and lacked the political courage and competence to pull Puerto Rico out of economic despair. Rubio and Jeb Bush have both told Puerto Ricans they are behind the territorys push for statehood, which some 60% of the islands residents support.

Democratic frontrunner Clinton said she was unconvinced that anything except restructuring Puerto Ricos debts under Chapter 9 bankruptcy (which would require an act of Congress) would provide a way out for the struggling territory.

Were not talking about a bailout, were talking about a fair shot at success, Clinton wrote, saying that inconsistent and incoherent treatment of Puerto Rico in federal laws and programs has substantially contributed to the economic decline.

Julio Lopez of Make a Road strongly contested the assertion that the government had overspent. Most of our utilities are from the 1950s, he said. Theyre old. Theyre extremely expensive.