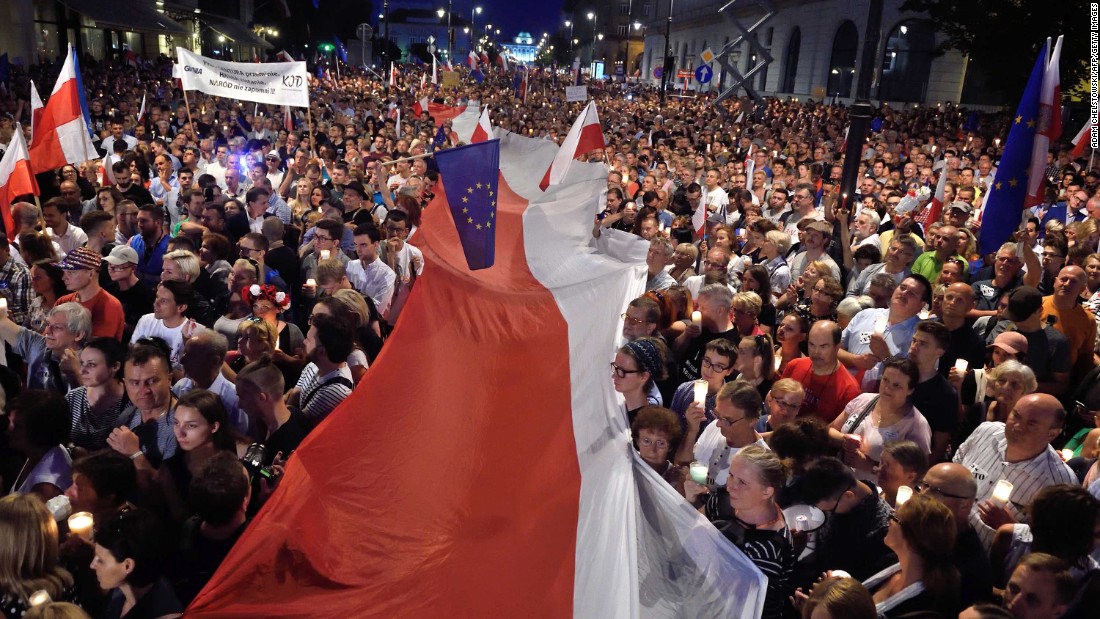 Warsaw, Poland (CNN)Protests spread to more than 100 cities in Poland on Saturday after a bill that would give its populist government the power to push all the nation’s Supreme Court judges into retirement passed the upper house of the National Assembly.

President Andrzej Duda appears likely to sign the controversial bill into law. He has 21 days to sign or veto the legislation, which would also give the justice minister the power to pick the judges’ replacements.
Protesters have poured into the streets in cities across Poland to denounce the measure, with many fearing the country’s position as a Western democracy is hanging in the balance.
“This is the most important decisions (sic) of (Duda’s) term; it’s one of the most important decisions in the new Poland,” said Adam Bodnar, Poland’s human rights ombudsman.
A poll conducted by CNN affiliate TVN found that 55% of Poles said Duda should veto the court laws; 29% said he should not.
Critics of the bill point out the President does have an out, as the bill has glaring errors in its directives. The biggest mistake has one article saying the President elects three judges, while in another article it says the President elects five.
Demonstrators came out and chanted “traitors!” and “disgrace!” shortly after the Senate approved the bill — just before 2 a.m. local time — following a 16-hour debate, TVN reported.
“This is a protest to a great extent about the future,” Bodnar said. “They’ve managed to make such huge protest because they were based on values and ideas and not under a particular party or banner.” 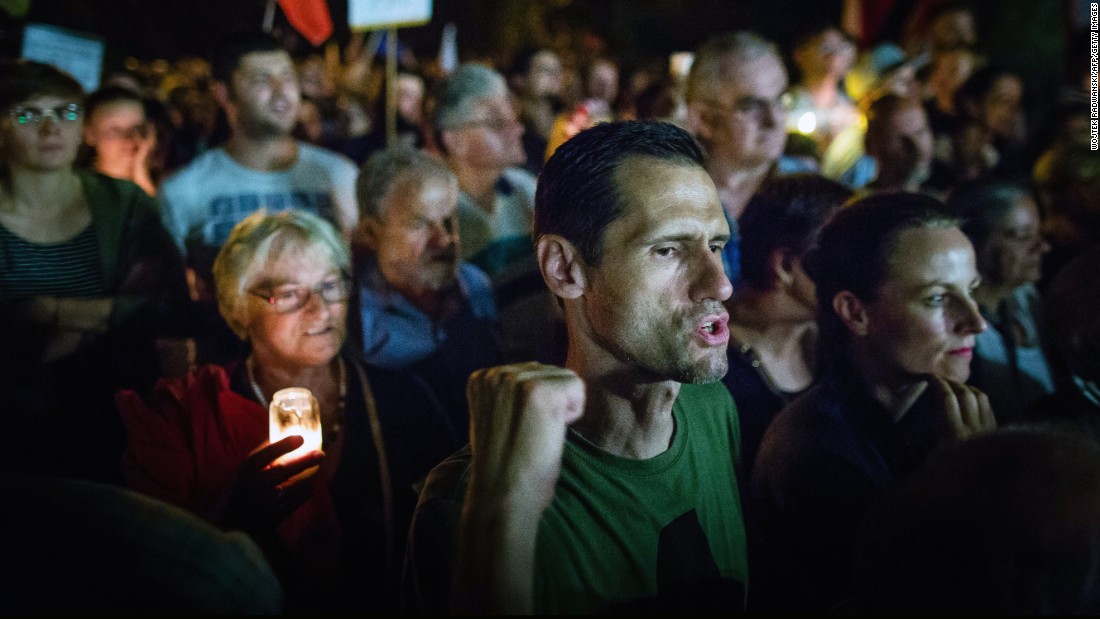 Three protests are planned Sunday in Warsaw ahead of what is expected to be a big demonstration Monday evening urging Duda to veto the bill. He is due to meet the high court’s chief justice Monday, a Senate statement said.
The bill’s passage could mark a turning point for the Eastern European country — one of the first former communist nations to join the European Union.
The move by the ruling right-wing Law and Justice party, known as the PiS, to control one of the last remaining independent government institutions has prompted concern in Washington and triggered warnings from the European Union that it is putting judicial independence at risk.
The party insists it is simply carrying out needed judicial reform.

Protesters vow to carry on

Warsaw resident Marcin Banaszkiewicz has been participating in protests since the proposal came to Parliament.
“I remember how my parents protested in 1989,” he told CNN on Saturday, proud of the demonstrations. “This is the same moment.”
Banaszkiewicz, who’s not a member of any political party, now waits to see whether the President will sign the measure.
“We will continue to meet in protest,” he said. “Until it is signed, there is hope.”
Andrzej Tomasz Celinski said he was marching for the future of his 1-month-old son, Tomasz.
Celinski said Saturday he was not surprised the bill passed and that he had little hope it would be vetoed.
“Some still hope that President Duda might veto this change in our judicial system,” he said. “But in the past he also showed that he is totally obedient to (the ruling party).”
But he said he sees a silver lining to the situation — in an awakened millennial generation that is active in politics and may help vote in a new government in the future.
Banaszkiewicz agreed, saying that if Duda signs the bill, the focus needs to be on upcoming elections.
However, he and others said they worry that removing the judiciary’s independence could compromise free and fair elections.
Poland’s Supreme Court determines the lawfulness of elections, and Bodnar, the human rights ombudsman, said “it is quote probable that this changes that.” 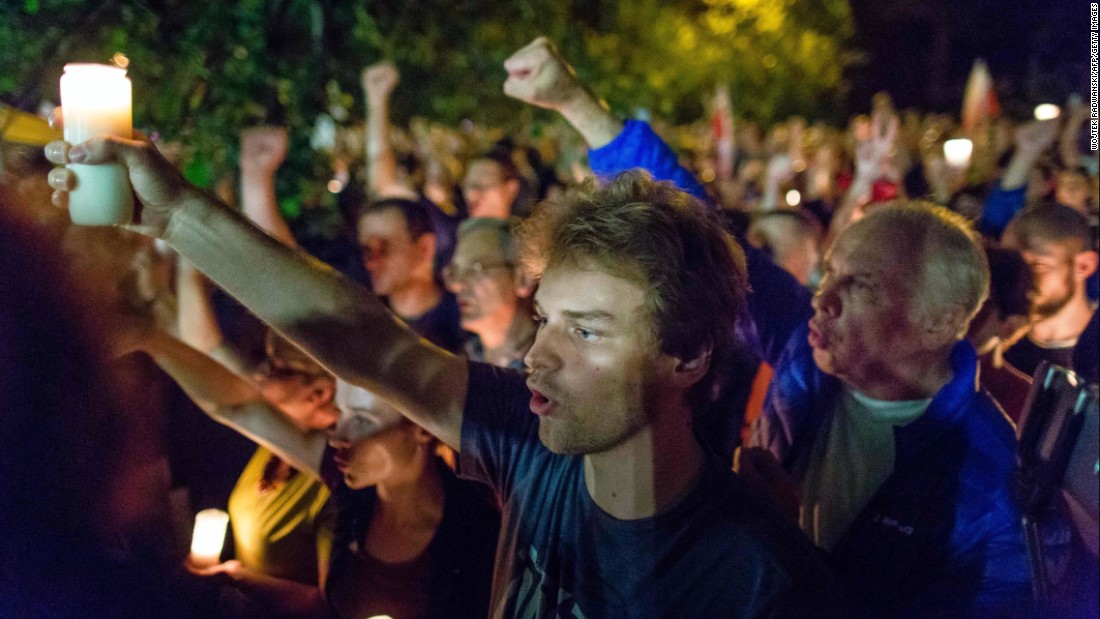 In a sign of the growing concern, a top EU official on Wednesday threatened the use of Article 7 — a mechanism that would allow for sanctions against Poland and possible suspension of its voting rights in the bloc. The measure has never been used before.
“Each individual law, if adopted, would seriously erode the independence of the Polish judiciary,” said Frans Timmermans, first vice president of the European Commission. “Collectively, they would abolish any remaining judicial independence and put the judiciary under full political control of the government.”
European Council President Donald Tusk, a former Polish Prime Minister from the opposition Civic Platform party, warned Thursday of “dangerous consequences” for Poland’s standing on the world stage and said he had asked Duda for an urgent meeting.
“Bringing the courts under the control of the governing party in the manner proposed by the Law and Justice party … will ruin the already tarnished public opinion about Polish democracy,” he said. 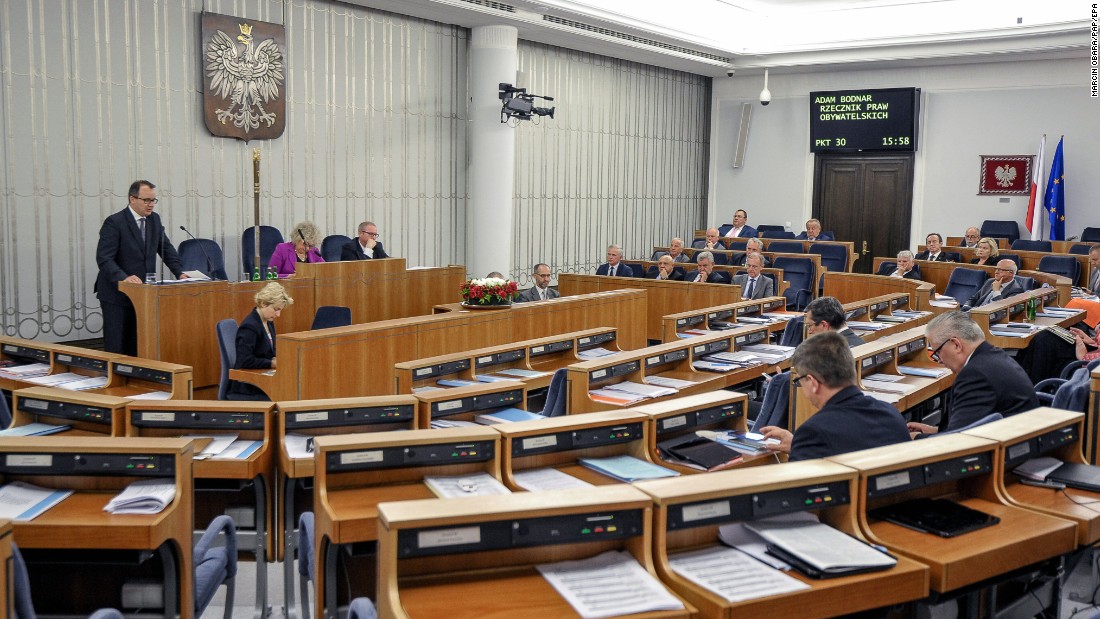 But Poland’s Ministry of Foreign Affairs rejected such concerns. “The judicial reform bill in question will not affect the independence of courts or judges and seeks only to regain the citizens’ respect for the judiciary,” the ministry said. “Reforms proposed in Poland are in the spirit of judicial systems in other European countries.”
In a televised address Thursday, Polish Prime Minister Beata Szydlo explained her party’s effort toward what it says is judicial reform.
“We know the courts are performing badly. That’s why we are answering the expectations of the Polish people, who want them to perform well and fairly,” she said, according to state media. “Today, this is not the case.”
If Duda does sign the measure into law, it sets up his government to clash with the European Union in Brussels. The bloc is set to reconvene to discuss Poland on July 26.
Poland does have an EU ally — Hungary — and its support could derail attempts to pressure the country in corral the judiciary measures.
“Because of our own national interest, because of Europe’s and Poland’s interest, we must make clear that the inquisition offensive against Poland can never succeed because Hungary will use all legal options” in the European Union to show solidarity with the Poles, Hungarian Prime Minister Viktor Orban said Saturday.

The measure passed in the Senate early Saturday is one of four aimed at changing the judiciary. Last week, Duda approved the first law, which allows Parliament to appoint 15 of 25 members to the National Council of the Judiciary.
The lower house of Parliament passed the latest bill Thursday. 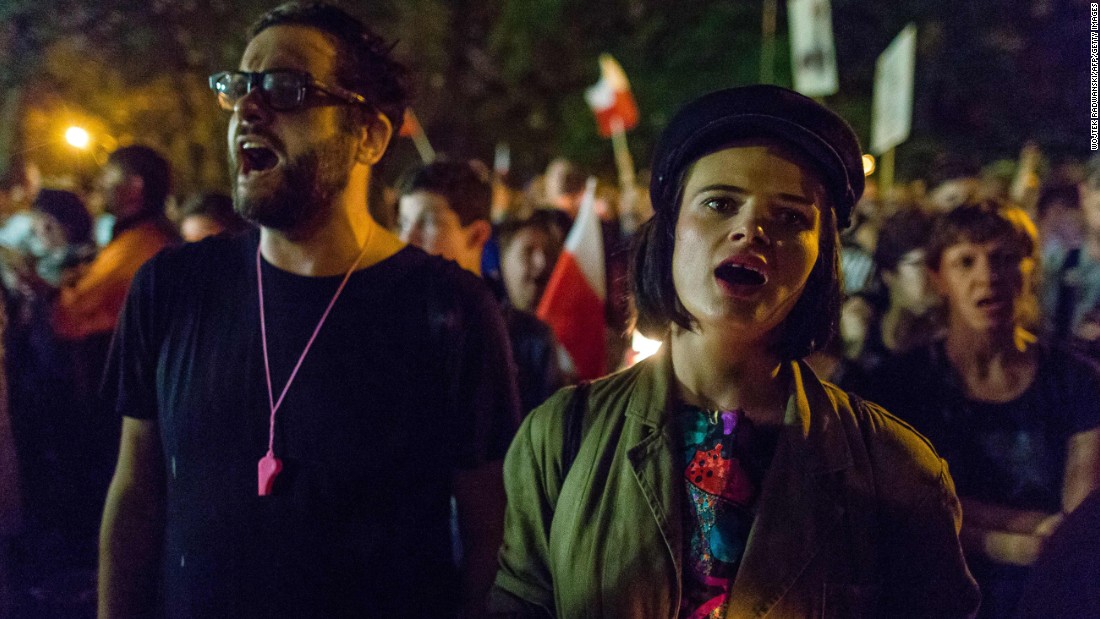 Grzegorz Drobiszewski, president of the Young Democrats Association, a youth group connected with Poland’s largest opposition party, accused the PiS on Saturday of “making a political coup d’etat” and attempting to take full control over the judicial system.
“This is a clear violation of the principle of a tripartite power,” he said. “Legislative, executive and judicial power in one hand is a dictatorship.”
Wojciech Mosiejczuk, a game designer and filmmaker, posted an image on Twitter of the Senate vote count, describing it as the “penultimate nail” in the coffin of Poland’s judicial system.
Guy Verhofstadt, a Belgian lawmaker who leads the liberal grouping in the European Parliament, tweeted Saturday that he was confident those opposed to the bill would continue the fight.
“Polish citizens know Poland can only be strong & prosperous if democratic and part of the EU. That’s why they will never give up,” Verhofstadt wrote.
Critics of the bill, and the opposition, admit the judiciary needs reform but disagree about the way in which the PiS has gone about it.
“It is a situation (where) you should repair your house, mend windows, paint walls, seal the leaking roof,” said Bodnar. “But you should not put explosives under foundations of the house.”

The public outcry over efforts to curtail judiciary independence has flown largely under the radar amid recent high-profile visits to Poland by US President Donald Trump and the British royals.
But the US State Department tweeted a warning Friday to Poland “to ensure that any judicial reform does not violate (the) constitution & respects judicial independence.”
When asked whether the Trump administration would urge Duda to veto the measure, State Department spokeswoman Heather Nauert said: “I am not aware if we will ask him to do that.”
Nauert said the State Department had passed along Washington’s concern that the bill limits the judiciary and potentially weakens the rule of law.
Since coming to power, the Law and Justice party has eroded other institutions and freedoms: The right to peaceful assembly has become more restricted, and new media laws have made it more difficult for the press to operate independently.
Poland plummeted 29 spots in 2016’s World Press Freedom Index, landing at No. 47. In 2017, it dropped to 54.