Sterling falls 0.3% to $1.2395 as City worries persist about UKs economic prospects outside EU 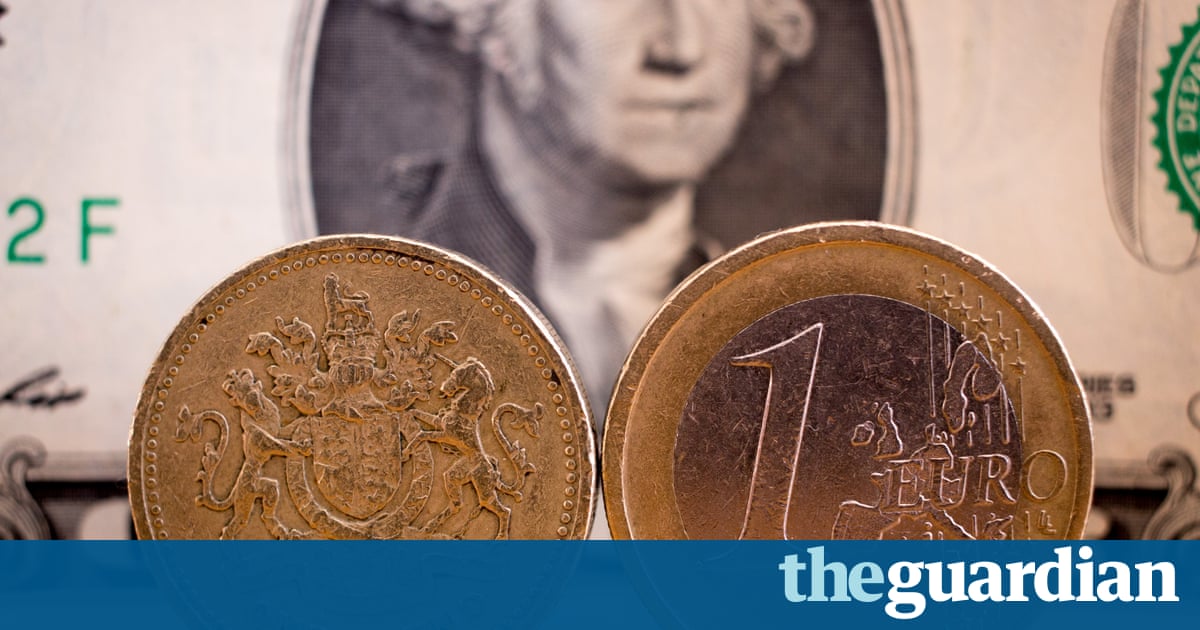 The pound has continued to fall against the US dollar as worries persist over the UKs economic prospects outside the EU.

Sterling suffered sharp losses last week as ministers at the Conservative party conference signalled they would opt for a hard Brexit settlement that sacrifices access to the single market and prioritises stricter immigration controls.

Sterling was under pressure again at the beginning of this week but some calm had returned to markets. The pound fell 0.3% against the US dollar to $1.2395 on Monday. It was flat against the euro at 1.11.

However, the pounds weakness boosted the UKs FTSE 100 share index which features companies that make a significant proportion of their profits in dollars as it closed at 7,097.5, near its record closing high of 7,104 last year.

Investor nerves were strained on Friday when the pound slumped more than 8% in a flash crash in overnight trading in Asia. It dropped from $1.26 to $1.1491 in just eight minutes a huge plunge in a market where a single cent is a big change and recovered only some of those losses during London trading hours. Sterling still ended the week about 4% lower against the euro and US dollar.

One market watcher said the currency was stabilising after the events of Friday morning. The dust has started to settle after the flash crash overnight on Thursday saw the pound briefly trade below 1.10 and $1.20, said Chris Saint, senior analyst at City firm Hargreaves Lansdowns currency service.

With a quiet week ahead on the economic indicator front, he expected the pound to continue to take its cues from politics. There is little on the domestic calendar this week to draw attentions away from ongoing worries over how politicians will handle Britains withdrawal from the EU, although Fridays construction output data will garner some interest, said Saint.

David Davis, the Brexit secretary, claimed that the major part of the fall in the pound to a 31-year-low had been down to a flash crash. He told parliament on Monday: There will be lots of speculative comments in the next two-and-a-half-years that will drive the pound down and up and down and up and there is little we can do about that.

The pounds sharp fall has raised pressure on those UK firms that rely on imports, such as retailers and those manufacturers who need raw materials like plastics and metals. A weaker currency makes imports more expensive. On the other hand, it makes UK exports more competitive and some companies have reported a pick-up in overseas sales since the British vote to leave the EU in June knocked sterling.

For consumers, the weak pound makes overseas holidays more expensive. There are also worries that sterlings fall will be felt at the tills as retailers pass on their higher costs. The British Retail Consortium warned on Monday that a failure to get a good trade deal would push prices up further still as shops adjust to higher trade tariffs.

Currency experts expect the pound to remain under pressure against the dollar on continued fears about the UK economic outlook. Another key factor keeping the pound low against the dollar is the prospect of US interest rates being raised while the Bank of England has hinted that with economic growth weak interest rates in the UK have further to fall from their already record low of 0.25%.

The dollar and US stocks were also boosted on Monday by a market view that Hillary Clinton had won the latest US presidential debate against Donald Trump.

Jasper Lawler, analyst at online trading company CMC Markets, said the fascinating presidential debate left markets favourite Hillary Clinton with a firm lead in the polls. Donald Trump was more measured in the debate but the damage had already been done after his lewd comments video was leaked two days earlier.