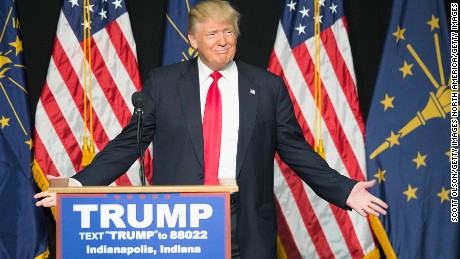 (CNN)A new poll suggests that a race for president between Donald Trump and Hillary Clinton could yield the lowest support for a Republican candidate among young voters in decades.

The survey, conducted by the Harvard University Institute of Politics, finds that in a hypothetical matchup, 61% of likely voters age 18-29 say they would vote for Clinton, while just 25% would vote for Trump. That’s worse than most other recent Republican candidates for president.
Since 1992, exit polls have found Republican candidates average 38% support among voters under 30. Sen. John McCain notched 32% against Barack Obama in 2008, marking the low-point for GOP candidates dating back to 1972, when modern exit polling began. Ronald Reagan was the only Republican candidate to win the under-30 vote since then.
As this year’s campaign for president has rolled on, younger Americans have tilted more Democratic generally, according to the IOP’s surveys. Last fall, 36% said they considered themselves Democrats, that’s up to 40% in the new survey. Republican affiliation has held about even at 22%, while the share who are independent has dipped from 40% to 36%.
Before asking about the current crop of candidates, the survey asked young Americans if they would prefer a Democrat or a Republican win the next election. The share saying they’d like a Democrat to win has climbed from 55% last spring to 61% now, while the percentage who favored a Republican dipped from 40% to 33%.
That change rests mostly among younger Hispanics (from 41 points toward the Democrats last spring to 55 points now) and whites (a 12-point Republican tilt last year is now a 2-point Democratic edge). White voters under 30 have only broken toward the Democrat twice since 1972: By 4 points in Bill Clinton’s 1996 re-election campaign and by 10 points in Obama’s first presidential win in 2008.
The Republican Party’s chances among young Americans likely aren’t helped by largely negative impressions of its remaining presidential candidates. Three-quarters of young Americans say they have an unfavorable view of Donald Trump, just 17% view him favorably. A majority, 52%, have an unfavorable view of Ted Cruz, 23% see him positively. And even John Kasich, who is less well known with about 4 in 10 saying they don’t know enough to have an impression, merits a negative tilt among those who do have an impression: 33% unfavorable to 24% favorable.
In keeping with national trends, Hillary Clinton is also largely seen unfavorably, 53% have a negative impression, 37% a positive one. Her Democratic rival, Vermont Sen. Bernie Sanders, is the only candidate to be seen favorably by a majority of young Americans, 54% favorable to 31% unfavorable.
Sanders has fared remarkably well among voters under age 30 in Democratic primaries and caucuses to date, averaging 70% support among this group, according to exit and entrance polling conducted in 21 states for CNN by Edison Research.
The IOP survey finds young Americans broadly distrustful of government and expressing doubts that political leaders share their concerns or that politics today can meet the nation’s challenges.
Overall, just 15% of those under 30 think the nation is heading in the right direction, while almost three times as many say it’s going the wrong way. Another 36% aren’t sure which way it’s going. Majorities say they rarely trust the president, Congress, the Supreme Court or the federal government more generally. A majority say they agree that elected officials “don’t seem to have the same priorities I have,” and about half agree that “politics today are no longer able to meet the challenges our country is facing” and that “politics has become too partisan.”
Despite that pessimism about politics, most say they do plan to vote in November and about 6 in 10 say it matters to them who the president is.
The Harvard IOP Survey was conducted March 18 through April 3 among a random national sample of 3,183 Americans age 18 to 29. The poll was conducted online among respondents selected from GfK’s KnowledgePanel, whose members are recruited using traditional phone and by-mail surveys and are provided with Internet access if they do not have it.
Results for the full sample have a margin of sampling error of plus or minus 2.4 percentage points.