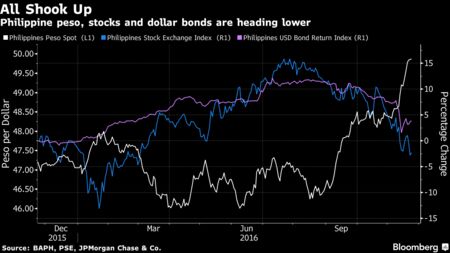 Asias emerging markets have faced outflows since Donald Trump won the U.S. presidential election earlier this month. The Philippines is ground zero for the rout as a resurgent U.S. dollar and Manilas still-expensive stock market have made it even more vulnerable, with the peso plunging to a six-year low.

The currency of the Southeast Asian nation is approaching 50 to the dollar for the first time this decade, set for its biggest annual loss since 2013. While equities are poised for its worst month since October 2008, valuations are still the priciest in Asia. A Bloomberg gauge of the dollar reached its strongest level since January amid speculation the president-elects policies will push the Federal Reserve to undertake a faster pace of rate increases.

Emerging markets globally are experiencing fund withdrawals, but what makes the Philippines different, or vulnerable, was its valuation, said Smith Chua, chief investment officer at Bank of the Philippine Islands, the nations second-biggest money manager with the equivalent of $12 billion in assets under management. The foreign-exchange movement has also been a significant factor for overseas investors. As the year is heading to a close, some of them want to lock in their gains before the peso weakens further.

The peso was at 49.995 per dollar as of 10:52 a.m. in Manila after reaching 49.999 earlier. It has weakened 5.6 percent in 2016. Overseas investors offloaded a net $327 million from the stock market in November, set for a fourth month of selloffs since President Rodrigo Duterte took office at the end of June.

A look at the flow of exchange-traded funds show that in the past month the U.S. had the biggest net inflow at $55 billion, data compiled by Bloomberg show. By contrast, developing nations, led by China and including the Philippines, saw outflows.

Philippine stocks are trading at 16.28 times 12-month estimated earnings, higher than the 11.9 times for the MSCI Emerging Markets Index of shares. The nations dollar bonds, which were up as much as 12 percent this year in July, have pared those gains to about 4 percent.

Philippine equities valuation peaked at 19.6 times earnings in July as stocks rallied amid speculation Dutertes policies would accelerate one of the regions fastest-growing economies. Since then, concerns over his deadly drug war — which has killed thousands — and his anti-U.S. rhetoric have led investors to pull back.

The last time the Philippine peso neared 50 to the dollar in 2008, the global financial system was melting down and the central bank raised interest rates to defend it. Some foreign-exchange strategists estimated earlier this month the currency would reach the level only by next year as a seasonal increase in money remitted by overseas Filipinos for Christmas spending will curb a decline in the currency.

‘Do you ever think about me?’: the children sex tourists leave behind

John Oliver: If You Believe Trump Is Bad, Wait Till You Meet Rodrigo Duterte