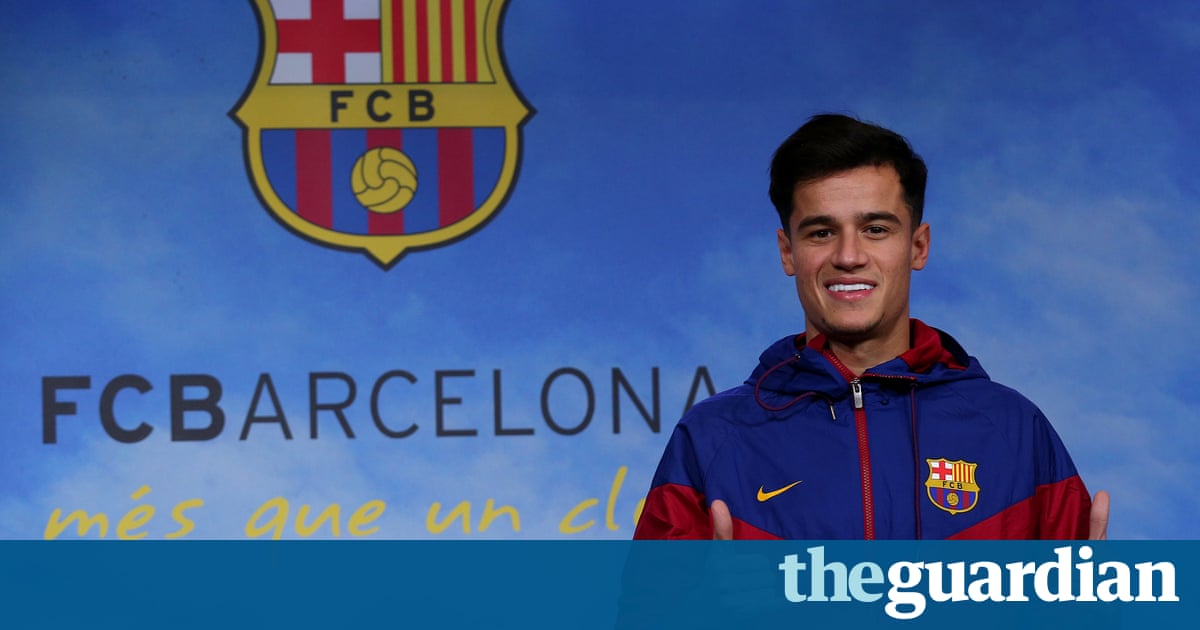 Philippe Coutinho had a media routine after Champions League games at Liverpool and the night of 6 December was no different. As usual, he smiled and said sorry to journalists requesting an interview in the mixed zone before heading over to a Brazilian television crew at the end of the line and giving both parties what they wanted – a few minutes with a star for the rights holders, quotes from the star that could not be open to misinterpretation. “I do not know how the future is going to be,” Coutinho told his compatriots. “What will happen in January, we will know it in January.” The ball had started rolling towards his £142m move to Barcelona exactly one month later.

Coutinho’s priorities could have been different on 6 December. That night he had been handed the Liverpool captaincy for the first time in a competitive fixture by Jürgen Klopp. He responded with the first hat-trick of his Anfield career, and last as it transpired, to inspire a 7-0 destruction of Spartak Moscow and Liverpool into the knockout stage of the Champions League for the first time in eight years. There were other topics to discuss that night. Coutinho chose to publicly rekindle the prospect of a transfer. He and his representatives were to be encouraged by Liverpool’s reticence in response.

Klopp and the club’s owner, Fenway Sports Group, were not stunned into silence by Coutinho casting doubt over his immediate future four months after being denied a move to Barcelona. Nor did they embrace an opportunity to balance the books with the £75m signing of Virgil van Dijk in the offing and £55m committed to bring Naby Keïta from RB Leipzig in the summer. Liverpool officials responded to approaches from Coutinho’s camp over a January exit with offers of their own, an improved contract chief among them, but not even the prospect of a shot at the Champions League – a prize the 25-year-old is ineligible for at Barcelona this season – could dissuade him.

“Philippe was insistent with me, the owners and even his team-mates this was a move he was desperate to make happen,” said the Liverpool manager, in a revealing statement that followed the clubs’ agreement on Saturday and a month of saying next to nothing on the subject. “It is his dream and I am now convinced there is nothing left at our disposal to change his mind.” It was the Liverpool manager’s decision that the time and money was right to part with a growing distraction.

Klopp’s initial hope of a full campaign from the Brazil international had been encouraged by his contribution at Melwood and to matches. Twelve goals in 20 appearances was an impressive reaction to his thwarted summer move and the early impression that life could be made awkward with the playmaker missing the start of the campaign with an alleged back injury. The manager harboured false hope. Coutinho’s reaction reflected his professionalism after the transfer window closed rather than commitment to Liverpool’s long-term ambitions. It was telling that he celebrated the majority of this season’s goals, including his hat-trick against the Russian champions, with a face like a slapped arse, to use the Liverpool vernacular.

Coutinho’s importance to Liverpool has grown while the joy he once displayed in their colours has faded. The deal – £106m up front plus £36m in more achievable add-ons than Barcelona proposed in the summer – represents a superb return for Liverpool on an £8.5m investment in Internazionale’s unpolished diamond five years ago. For Coutinho, he and his young family have their dream move, he is reunited with close friend Luis Suárez and, despite the Champions League sacrifice, he will win more in four months as a Barcelona player than he did in five years at Anfield should Ernesto Valverde’s team maintain their hold on the summit of La Liga.

There will also be an increase on his £150,000 weekly Anfield wage. From the moment he stepped off a private plane in Catalonia, there was also the increased pressure of being the second most expensive footballer in the world – until Kylian Mbappé finalises a £166m transfer to Paris Saint-Germain – and the long-term replacement for the great Andrés Iniesta. At his current rate of development and age that should not trouble Coutinho.

The real concern lies with Liverpool and what “the magician’s” vanishing act represents for Klopp’s aims this season and beyond. A strong and improving team have lost a creative spark and a player who has assumed greater responsibility with the passing seasons at Anfield. The impact on this season’s strong top-four challenge, FA Cup and Champions League, with Porto to come in the last 16, is immeasurable, so too the impact on the dressing room, although it could be offset by reinvesting the proceeds of Coutinho’s sale in a quality replacement and a goalkeeper.

Thomas Lemar of Monaco is a confirmed target for Liverpool, who were unable to agree a deal for the 22-year-old in August. Monaco have claimed the France international is not for sale this month and, as the pursuits of Van Dijk and Keïta demonstrate, Klopp is prepared to wait for the right man rather than lower his sights. That virtue should at least ensure there is no repeat of the panic that followed Suárez’s £75m departure for Barcelona in 2014. Brendan Rodgers ended up with Mario Balotelli and Rickie Lambert as replacements that summer and the seeds of his own exit were sown.

Liverpool do not have an encouraging track record of selling prized assets and improving. Unsurprisingly, not many clubs in world football do. Unlike post-Suárez, Xabi Alonso or Fernando Torres, however, Klopp is correct to state that the steady improvement of his tenure ensures the club is “strong enough to continue with our aggressive progression on the pitch, even when we lose an important player. We have never been in a better position in recent times, as a club, to react in the right way.” Barcelona may have Yoko Ono’d the “Fab Four” – to use the trite description of Liverpool’s attacking armoury – but Mohamed Salah, Roberto Firmino and Sadio Mané remain a formidable trident with the prospect of more to come.

What Coutinho’s move shows, unfortunately for Klopp, is a failure in his stated aim to make Liverpool a destination for the game’s finest talents instead of a stepping stone. In truth, only a select few clubs reside outside football’s food chain and it is unrealistic to expect a South American talent such as Coutinho, Suárez or Javier Mascherano to stand firm at Anfield when a Spanish giant calls. Or any talent, for that matter. The reality is that clubs have to extract maximum value when the call arrives, as Liverpool have.

Anfield has lost a key player approaching his peak, not for the first time, and the onus is now on Klopp and FSG to minimise the impact. That process will have started before Coutinho boarded his flight. Liverpool move on.