A craze is going around the internet this week, and it’s super funny. People are using their phones’ predictive text to finish song lyrics, and apparently, our phones are pretty good at writing some pretty hilarious songs.

Check out some of the funniest phone-generated lyrics to popular songs. 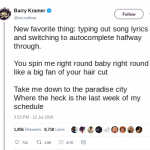 Barry Kramer, writer and actor famous for his YouTube series Game Grumps, had an idea for a fun game you could play with your phone.

Start typing song lyrics and then let your text predictor fill in the rest.

And their responses trying the game for themselves were absolutely hilarious.

This one is pretty catchy.

This one tackles the age-old question: What if Queen had sung about rental agreements?

Billie Jean is not my lover, she is my co-parent and we are doing our best.

She’s just trying to help them pack a healthy lunch.

More funny lyrics on the next page!

Songs about doing chores are not popular for a reason.

I can’t see anyone rocking out to that.

Bedhead: another topic not really big in song lyrics.

But good on you for loving yourself just the way you are.

Sometimes you like big butts, but you’re too shy to say anything.

Admit it: you would use your time-turning ability for something completely mediocre, too.

Why are phones so bad at writing lyrics? Or are they so good? Read more on the next page.

It’s just so hard to get a hold of your insurance company!

Makes sense there would be a song about it.

Tiny dancer can you please stop checking your Twitter notifications?

A song and customer service!

The first draft of Taylor Swift’s song was a lot less dramatic.

The inspirational tune we all need.

Just keep getting back up!

The Spice Girls left out this one.

Hard to make the word “dopamine” work in a song, though.

If only the dentist had been more gentle, it would’ve never come to this.

I smell a chart topper.

There really should be more songs about online shopping.

This is how I feel at every club.

Is it time for late night pizza yet?

I think this actually is what love is.

Especially if they make you mac and cheese.

They just keep going on the next page!

A new kind of break up song.

When you’re in the middle of a song but are also having an existential crisis.

Please, I just need to make my flight.

And it’s so expensive to get an Uber.

What funny lyric does your phone make up?

Try it for yourself and share your results with this article!