A multimillion-dollar spending spree, allegedly using funds from the former Soviet bloc, appears to have caught up with Trumps one-time campaign chief 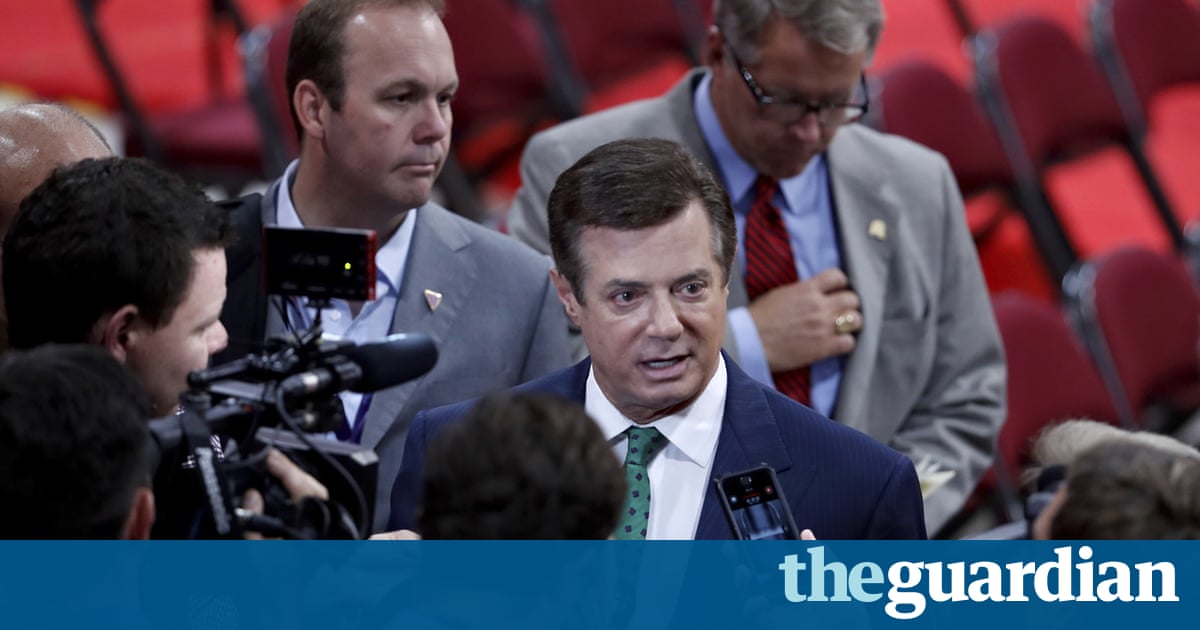 An indictment unsealed on Monday morning lists dozens of alleged payments by Paul Manafort, Donald Trump’s former campaign chairman, to stores and businesses since 2008. In nearly all the transactions, cash flowed from accounts in tax havens such as Cyprus and St Vincent and the Grenadines.

For years, the transglobal torrent of money drenched luxury retail outlets and real estate offices from New York to California and back again, the indictment says. Art galleries, landscapers, car dealerships – none of the retailers seem to have checked very carefully where the cash came from.

Amid the shopping sprees, Manafort himself returned frequently to the alleged sources of his fortune in the former Soviet bloc. The consultant-for-hire had set up shop at 4 Sophia Street in Kiev back in 2005, as Ukraine struggled through waves of election, revolution and reverses.

There, Manafort found high demand for his skills as a former Washington lobbyist for some of the world’s most notorious despots – Zaire’s Mobutu Sese Seko, the Philippines’ Ferdinand Marcos and Angolan rebel Jonas Savimbi among them. Soon, his sphere of operation came to include members of the Russian oligarchy.

But none of those clients was as significant as the one waiting in his future: Donald Trump. For five months in the spring of 2016, as Trump scrambled to lock down a resistant Republican party, Manafort stepped in as campaign chairman, offering all the street smarts that 40 years of selling advice out of a briefcase had taught him.

Manafort’s partnership with Trump appears to have ended for good on Monday, when Manafort surrendered at FBI headquarters, without a word from the president in his defense. Along with a former business partner, Rick Gates, Manafort faces federal charges including conspiracy, money laundering and tax evasion.

None of the cash that helped Manafort “enjoy a lavish lifestyle” had made a stop at the Internal Revenue Service, prosecutors claim.

It seems a dazzling fall for a man who just one year ago was on the verge of celebrating one of the greatest political upsets of all time, the election of Donald Trump as president of the United States. Manafort might have hoped the victory would deliver him from legal peril – and it could yet, given the president’s powers to grant pardon.

But the conversion of a campaign chairman to potential felon represents a criminal crisis of historic dimensions for US politics, and the culmination of a presidential campaign story that seems out of place for American democracy – even as it seems of a perfect piece with the nominee.

Manafort, 68, began his career in politics in 1976, working as a field lieutenant on the floor of the Republican national convention to stave off an attack on the incumbent president, Gerald Ford, by an upstart called Ronald Reagan.

Four years later, Manafort was working for Reagan, and directly after his 1980 victory, Manafort opened a lobbying firm with the future Trump adviser Roger Stone, Charles Black and, later, Peter Kelly. The firm came to specialize in cultivating favors in Washington on behalf of foreign clients with difficult images.

“Black, Manafort, Stone and Kelly lined up most of the dictators in the world that we could find,” Stone said in a podcast last year. “Pro-western dictators, of course. Dictators are in the eye of the beholder.”

A 1992 Center for Public Integrity report placed the firm atop its rankings of a group it called “the Torturer’s Lobby”. Manafort, who has denied all wrongdoing, has said that his consulting work helped to achieve victories for democracy in otherwise out-of-reach places.

Trump liked Manafort’s sales pitch. In February 2016, the real estate tycoon had already won three stunning victories in state primary contests, but the campaign feared the Republican party would find a way to rob Trump of victory at the last minute, at the national party convention.

Given the comparative placidity of recent presidential contests, almost no one had relevant experience of herding delegates in a convention setting, with one notable exception: Manafort.

Manafort’s CV was a perfect fit for Trump. But for a candidate who prized personal loyalty above all else, even more important was Manafort’s status as a downstairs neighbor. In 2006, Manafort had spent $3.7m on an apartment in Trump Tower in Manhattan.

Trump hired Manafort, who quickly rose to the level of campaign chairman. Trump secured the presidential nomination. And then, with a reality TV showman palpably close to the presidency, everything came under a microscope as it never had before.

Manafort did not last long under the scrutiny. It emerged that a handwritten ledger recovered from the home of the former Ukrainian president Viktor Yanukovych listed $12.7m in payments to Manafort’s company. As questions mounted about Manafort’s undisclosed work for Kremlin-linked political interests, he was forced to step down from the campaign, just one month after the convention euphoria.

Under pressure from investigators, Manafort registered as a foreign agent in June 2017 – but by then it was too late. Reports had emerged that special counsel Robert Mueller was scrutinizing Manafort on suspicion of money laundering. A month later, FBI agents stormed Manafort’s home in a pre-dawn raid, seizing computers and documents.

At the time, Trump spoke in Manafort’s defense.

“I’ve always found Paul Manafort to be a very decent man,” Trump said at the time. “He’s like a lot of other people, probably makes consultant fees from all over the place, who knows, I don’t know.

“But I thought it was pretty tough stuff.”