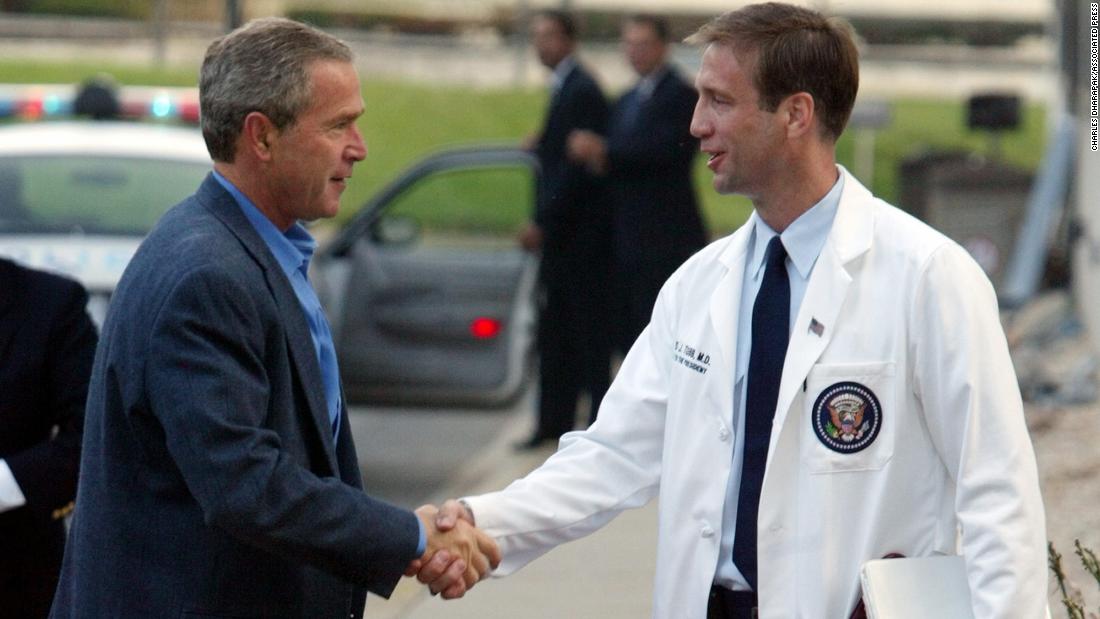 CNN gathered past reports from former presidents’ physical exams — documents that typically share basic information such as height, weight and blood pressure, but also detail skin tag removal for Obama, a cyst drained on George H. W. Bush’s finger, and how Gerald Ford’s doctor advocated for a White House swimming pool.
President aren’t obligated to release any results from their examination, but the White House said it would provide a “detailed readout” of Trump’s exam on Tuesday.
Here’s a look at the health of past presidents, based on their physical examinations.

Obama had four known physicals while he was in office: 2016, 2014, 2011 and 2010. The memo for each exam, written by the president’s physician, was addressed to the acting White House press secretary at the time of each report.
Obama’s letters outline the president’s vitals — all within a healthy range — and offer brief summaries of all his major body systems and some parts such as head/ears/nose/throat. All lab results came back normal, including a PSA test for prostate cancer, which is recommended by the American Cancer Society for African-American men beginning at age 45, because they are considered at high risk for the disease.
All four of Obama’s reports listed his current medications. In 2016, the president was advised to take vitamin D daily, Nexium “as needed for occasional acid reflux symptoms,” Nicotine gum (as needed for ongoing smoking cessation efforts), as well as Malarone “as indicated during global travel to malaria endemic areas.”

The letter summarizing the results of George W. Bush’s 2001 physical lists 12 doctors who examined the president. His exam was supervised and reviewed by two additional doctors, including Dr. Richard J. Tubb, one of the longest-serving White House doctors.
The report notes Bush has “a history of activity and sports-related injuries,” had benign polyps removed from his colon in 1998 and 1999 and had “mild high frequency hearing loss,” but that his speech frequency hearing was “excellent.”
We also learned the president smoked “an occasional cigar,” didn’t drink alcohol, but did drink diet soda and coffee. That year, he also reported running “(on average) 3.0 miles, 4 times weekly” and cross-training that included swimming, free weights and the elliptical.
The report states: “The President is in the top 2% of men his age in cardiovascular fitness. This fitness level would place him in the Excellent category for men 40-44 and Superior range for men 45 and older. He is stratified to a very low coronary risk profile.”

At a 1997 physical,Clinton complained he’d been having some trouble understanding people talking in crowded rooms. And following a hearing test, the 42nd president was fitted for hearing aids. He also had a benign cyst removed from the left side of his chest, which doctors said was similar to another one removed from his nose the previous year. Clinton weighed 20 pounds less than he did the year before, which he attributed to eating a healthier diet and working out more regularly.
Following a 2001 physical, a statement by presidential physician Dr. Connie Mariano revealed “a lesion on his back suspicious for skin cancer was excised. The pathology results … confirmed that the lesion was a superficial basal cell skin cancer. Pathologists noted that the margins of the legion appeared ‘clean’ indicating that the lesion had been totally removed.”
In 2011, CNN Chief Medical Correspondent Dr. Sanjay Gupta reported in the CNN documentary “The Last Heart Attack,” the possibilities of preventing — and perhaps even reversing — heart disease. Gupta interviewed Clinton, who spoke candidly about his personal wake-up call: a quadruple bypass operation in 2004. Clinton also had heart surgery in 2010.
“I was lucky I did not die of a heart attack,” he told Gupta.
In 2010, Clinton embraced a vegan diet: no meat, dairy or eggs.

A statement released by Bush’s press secretary revealed that a “sebaceous cyst on the third finger of his left hand was drained. The President is wearing a Band-Aid on the finger, which he can remove within the next few hours. This cyst has been present for many years and does not present a medical problem.”

In October 1981, Reagan was examined by 14 specialists and was found to be “in excellent health,” according to a statement issued by the White House physician. Notably, he said the president had “fully recovered” from the gunshot wounds he sustained during an assassination attempt in March 1981.
Reagan underwent another exam in May 1984, during which his doctor concluded he was in “very exceptional physical condition.” However, doctors did discover a small polyp in his colon, which they removed and determined to be benign (similar polyps were found and removed during the president’s 1985 and 1988 exams). The rest of Reagan’s tests results this year were deemed “entirely normal.”
Following a March 1985 physical, the White House doctor said that “President Reagan continues to enjoy good health. His overall physical and mental condition is excellent. I am especially impressed with the fact that his blood pressure is lower than a year ago — this is quite remarkable.”
Reagan received his last known exam while in office in December 1988. The president’s physician found him to be in “remarkable physical condition.”

In January 1975, Ford’s physician said he was “happy to report he is in excellent health. The results of all medical tests were normal in every way.”
Ford underwent another physical in July 1976, during which his doctor said, “He has had no complaints … other than mild discomfort in his knee following periods of prolonged standing. The President has maintained his physical capacity for long working hours. He sleeps very well and continues to follow his diet and weighs between 195 and 198 pounds.”
In 1975, Ford’s doctor noted “the completion of the new White House swimming pool will provide him with short intervals for relaxation that can easily be fitted into his busy schedule.”
“I would like to take the time to acknowledge those citizens who, by their contributions, make a swimming pool available for the President in the White House,” Dr. William Lukash said at a January 1976 press conference. “I might add that the President was reluctant to use the pool during the winter months because of his concern about energy conservation. I spoke to him about this and felt it was to his advantage to have the use of this pool because I thought it would be an improvement in his sense of well-being and make him more conducive to his feeling better the next day. … The President swims approximately 24 lengths of the pool, which adds up to about a quarter of a mile, and he does this in about 14 minutes.”