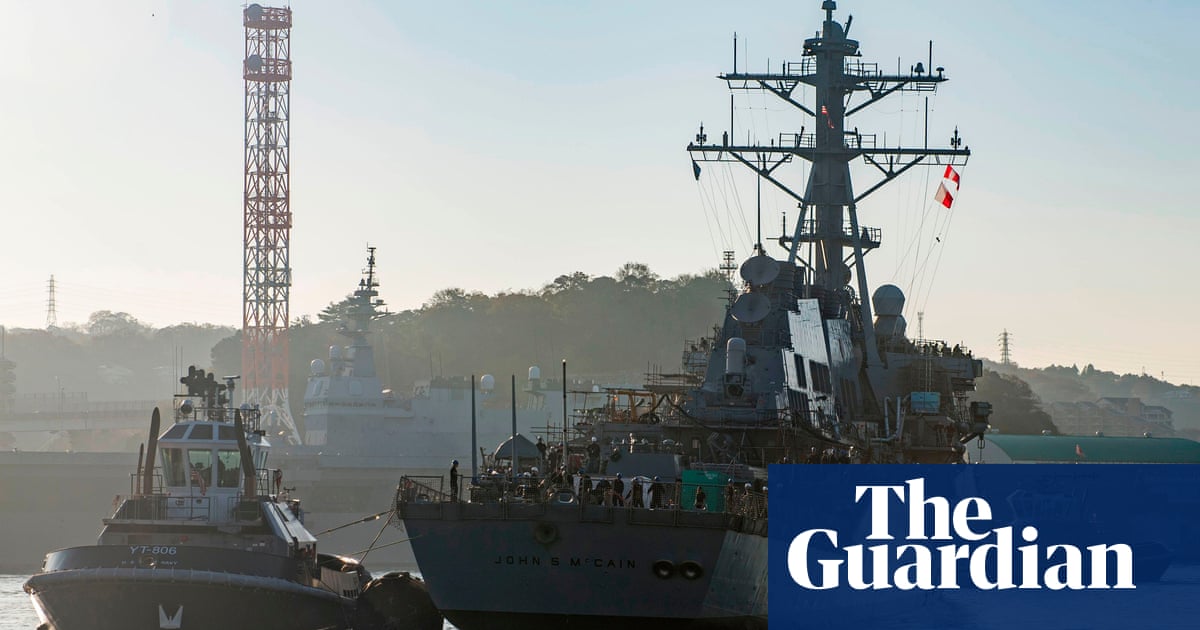 Donald Trump has confirmed that a warship named after his Republican nemesis, the late Arizona senator John McCain, was intentionally hidden from his view during his visit to a naval base in Japan this week.

The president confirmed that the ship had been intentionally hidden, saying someone had taken measures “because they thought I didn’t like [McCain]”.

The Wall Street Journal cited an email dated 15 May from an official at the US Indo-Pacific Command to US navy and air force officials which said the USS John McCain “needs to be out of sight” during Trump’s Memorial Day visit to Yokosuka base on Tuesday, the final day of his state visit to Japan.

The email asked officials to “please confirm” that directive “will be satisfied”.

When a navy commander expressed surprise at the instruction, the official replied: “First I heard of it as well,” according to the newspaper’s account of the email exchange.

The official said he would talk to the White House to get more information about the directive, the Journal reported.

The initial email also detailed plans for Trump’s arrival at the base, south of Tokyo, including instructions for the landing areas for helicopters, and preparations for the USS Wasp, where the president addressed US sailors.

Trump confirmed the report in a press conference, although he said he had been unaware of the move.

“John McCain, I wasn’t a fan but I would never do a thing like that. Now, somebody did it because they thought I didn’t like him, OK. And they were well meaning, I will say. [But] I didn’t know anything about it,” Trump said.

The Journal published a photograph showing that tarpaulin was placed over the McCain’s name before Trump’s arrival in Japan last Saturday, adding that sailors were instructed to remove any coverings from the ship that included its name.

The paper also said sailors on the ship, who generally wear caps bearing its name, were given the day off during Trump’s visit to the USS Wasp.

But Cmdr Clay Doss, a spokesman for US navy’s Seventh Fleet, told the Associated Press that the tarp was on the ship on Friday but was removed by the time Trump arrived in Japan the following day. “All ships remained in normal configuration during the president’s visit,” he said.

Lt Col Joe Buccino, a Pentagon spokesman, said the acting US defence secretary, Pat Shanahan, was not aware of the directive.

The White House has not commented.

The Journal said that after the tarp was removed, a barge was moved closer to the ship, obscuring its name.

Trump claimed he knew nothing about the plans to “hide” the vessel, which would have been visible when he addressed sailors on a Japanese helicopter carrier, the Kaga, also stationed at Yokosuka.

Trump tweeted that he had not been informed “about anything having to do with the Navy Ship USS John S. McCain”.

McCain’s daughter, Meghan, said Trump will “always be deeply threatened by the greatness of my dads [sic] incredible life”.

She said in a tweet: “There is a lot of criticism of how much I speak about my dad, but nine months since he passed, Trump won’t let him RIP. So I have to stand up for him. It makes my grief unbearable.”

John McCain, who died from brain cancer last August, made no secret of his dislike of Trump. In 2015 he angered the then presidential hopeful by saying he had “fired up the crazies” at a rally in Phoenix.

Trump responded by telling supporters that McCain was only a war hero “because he was captured. I like people who weren’t captured”. McCain was shot down during the Vietnam war and tortured by his North Vietnamese captors during more than five years as a prisoner of war.

After Trump took office, McCain became a vocal critic of Tump, who continued to attack his fellow Republican even after his death.

Trump was not invited to McCain’s funeral and raised the White House’s US flag back to full-mast shortly after McCain’s death, despite requirements for it to remain at half-mast for another day. The flag returned to half-mast later in the day.

Wire agencies contributed to this report.