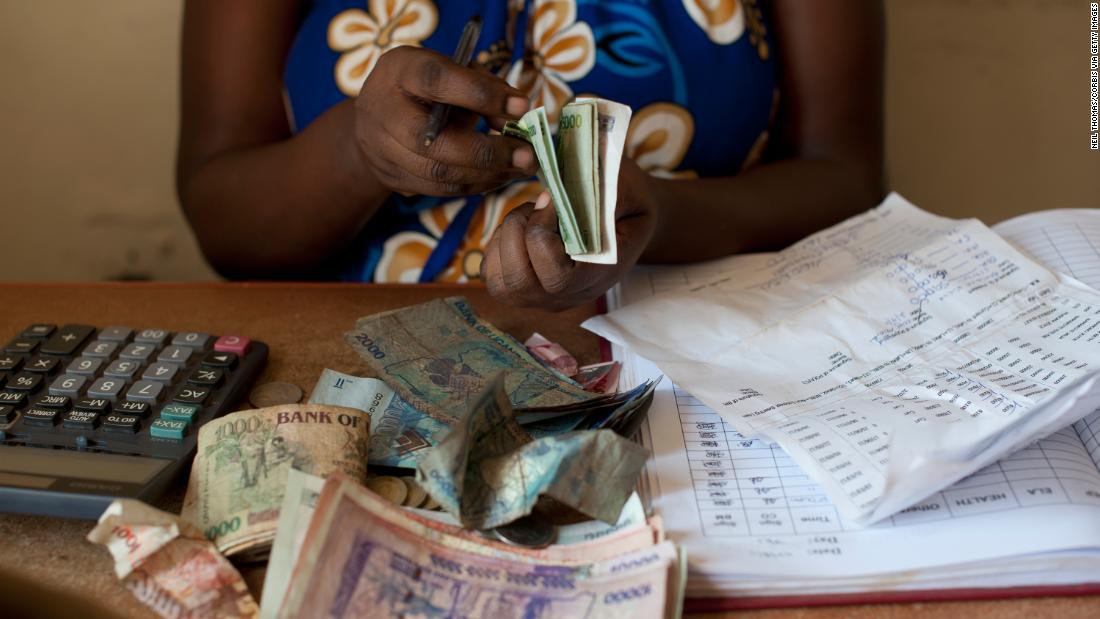 (CNN)As a girl, I was taught to believe that personal agency prevails over societal biases. I was told that I could accomplish anything if I believed in myself and that sexism was not insurmountable. Later, as a woman, I found out that my parents’ advice could not have been wiser.

In Africa, the gender gap in access to financial services is driven by women entrepreneurs’ own self-perception. Such perception leaves many African women on the fringes of the financial sector—unable to save, borrow, or build capital.
Worldwide, women’s access to finance is disproportionately low. Despite substantial overall progress—in 2017, the World Bank reported, 1.2 billion more people had bank accounts than in 2011—there is still a 9% gap between women’s and men’s access. In sub-Saharan Africa, only 37% of women have a bank account, compared with 48% of men, a gap that has only widened over the past several years. The figures are even worse in North Africa, where about two-thirds of the adult population remains unbanked and the gender gap for access to finance is 18%, the largest in the world.
These striking figures raise urgent questions for decision makers in Africa. What continues to fuel gender disparity in access to finance across the continent? And why, despite all efforts, is the gap even wider today than a decade ago.
The mainstream view of economists is that supplyside constraints, such as high interest rates and collateral requirements, play a major role in excluding women from the formal credit market. High interest rates disproportionately discourages women entrepreneurs from applying for loans, while lack of collateral can mean they have less access to loans than their male counterparts. And when they do have access, women typically face more stringent loan arrangements than men.
But women’s decision making behavior also plays a key role in this gender gap.
In the credit market, women entrepreneurs fail even to apply for loans because of such factors as low financial literacy, risk aversion, and fear of failure. Intuitively, one would expect women who choose to be entrepreneurs to be at least as competitive as men entrepreneurs. Why, then, are they self-selecting out of the credit market?

Fresh evidence drawn from the credit markets of 47 African countries suggests that women entrepreneurs in Africa, in general, and in North Africa, in particular, are more likely to self-select out of the credit market because of low perceived creditworthiness.
These women did not apply for loans or lines of credit because they were discouraged by their own perception that their applications would be denied. Our study finds that women managers of micro and small firms are more likely than men to self-select out of the credit market.
Along with this key finding, we observed three stunning phenomena that reinforce our hypothesis. First, the complexity of application procedures and unfavorable loan and credit terms did not discourage women entrepreneurs from applying for credit. Second, women entrepreneurs’ self-selection was not found to relate to the observed creditworthiness of their firms. And, finally, women’s self-selection persisted even in the absence of discriminatory lending practices, suggesting that this behavior is not merely a response to discrimination by financial institutions.
Such evidence presents an opportunity to close the persistent gender gap in access to finance in Africa and presumably in other developing regions too. African decision makers should, can, and must do more to address these factors, such as the financial literacy of women and girls. This is indispensable in today’s rapidly changing and complex credit market.

4 signs a company is a good employer for women

America is facing a leadership crisis. It’s on us to fix it

Even in a country like Kenya, which has a sound financial system and many women-specific programs, women entrepreneurs still face numerous challenges to accessing those funds. Financially literate entrepreneurs make more informed financial decisions overall and assess their creditworthiness more objectively. Hence, arming women entrepreneurs with the appropriate financial knowledge and skills will boost their effective engagement in the credit market.
One pioneer model is Malaysia’s Women Entrepreneur Financing Programme, which equips women with the knowledge and skills to enhance their strategic business ability in key functional areas, including financial management, marketing, leadership, and technology. The program has helped close Malaysia’s gender gap in borrowing.

In addition to financial knowledge, gender differences extend to financial behavior. Women, for example, are more likely than men to save informally. One way to foster women’s demand for financial services is thus to introduce financial products aimed at meeting the needs of borrowers who traditionally use informal systems of finance—for example, loans that accept smaller and more movable assets and traditional wealth storage mediums such as livestock and gold as collateral.
Governments can help develop such new products—for instance, by putting in place the necessary legal and regulatory framework. Some local banks in West Bank and Gaza now offer loans to small and medium-sized enterprises based on movable assets, with a wide range of innovative products for women, including collateral free loans and loans secured by gold. These loans are accompanied by financial literacy programs and online business toolkits and advisory services to help smaller enterprises and women entrepreneurs manage and grow their businesses.
Africa’s gender gap in access to finance can have a dramatic impact on social and economic progress. Women today dominate African agriculture, the continent’s most important sector.
When women farmers lack access to financial services, their ability to invest in modern technologies to raise their productivity is limited. They cannot diversify their farms. They cannot grow high-value crops and invest in assets such as livestock. And they cannot invest in better nutrition for their children.
The fashion industry in sub-Saharan Africa is also dominated by women, whose small businesses connect a vibrant cotton-textile-garment industry that produces a whopping $31 billion annually. Without access to financing, women-owned enterprises and entrepreneurs struggle to tap into higher-value areas of the fashion industry.
With greater access to finance working capital, many African women entrepreneurs will see their businesses blossom, paving a road toward a better future for everyone.