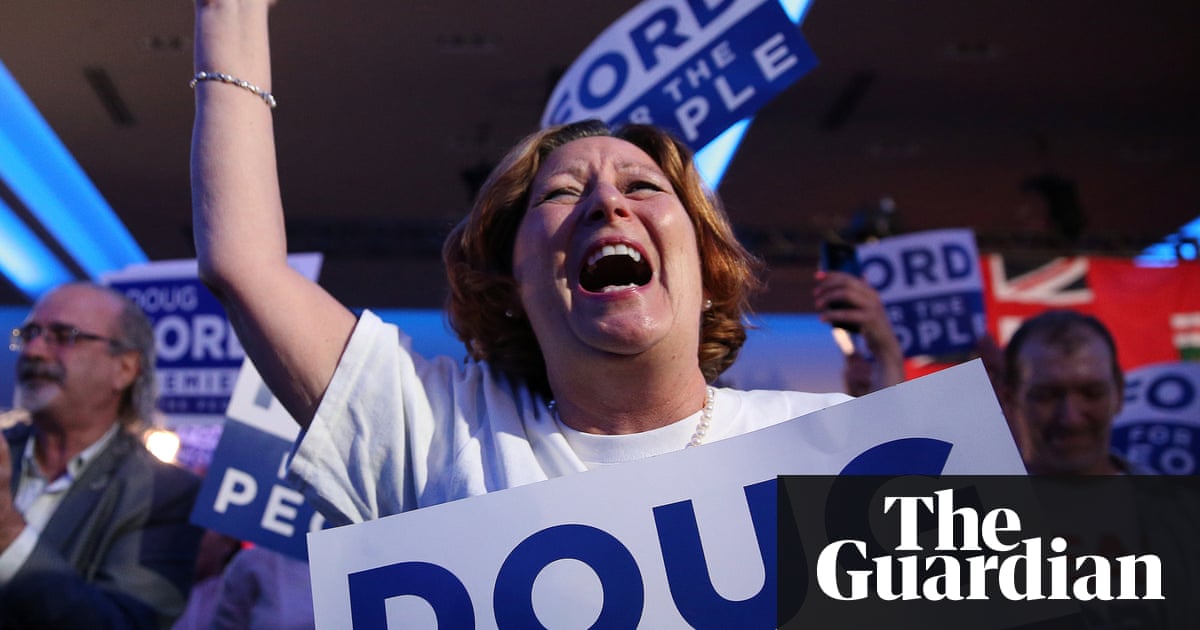 Doug Ford – the brother of controversial former Toronto mayor Rob Ford – is the new leader of Canada’s most populous province, winning a majority government in a local show of strength for the divisive wedge politics that have rattled much of the world.

Ontario’s Conservatives, led by Ford, won 76 of the 124 seats in the province, with 99% of the polls reporting. Buoyed by promises that included slashing income taxes, reducing the price of gasoline, boosting spending on healthcare and transit and repealing carbon pricing, the Conservatives won 41% of the vote, bringing an end to 15 years of Liberal rule in the province.

“This victory belongs to the people,” Ford told supporters on Thursday. “Together we made history. We have taken back Ontario, we have delivered a government that is for the people.”

Ford – a businessman who rails against the elite and regularly peppers his speeches and interviews with boasts and falsehoods – is the brother of the late Rob Ford, the former Toronto mayor who made headlines around the world after he admitted to smoking crack cocaine while in office.

In his victory speech, Ford thanked his brother. “I know my brother Rob is looking down from heaven. I’m just getting chills talking about him right now,” he said. “I know Rob is celebrating with us tonight. We owe so much to Rob’s legacy.”

Throughout the campaign Ford’s brand of populism prompted a slew of comparisons to Donald Trump, as the Canadian leader took aim at safe injection sites and opposed legislation to create protest-free zones outside abortion clinics. But in contrast to Trump, he campaigned hard among Canada’s immigrant communities who hold considerable sway in several ridings in the province.

He has long been a controversial figure in Canada; during his one term as a Toronto city councillor he refused to attend the city’s Pride parade – describing it as “middle-aged men, with pot bellies, running down the street buck naked” – and lashed out at a home for developmentally disabled youth, labelling it a “nightmare” that had “ruined the community”.

Ford also gained a reputation as his brother’s most aggressive defender, lashing out at Toronto police and journalists as Rob Ford fended off claims he smoked crack.

Doug Ford himself was plagued by drug-related allegations; in 2013, the Globe and Mail reported he had sold hashish for several years in the 1980s. Ford has denied the claims.