No matter the merits of the case for destroying Isis, the fact remains that its unconstitutional for the president to go to war without Congressional approval 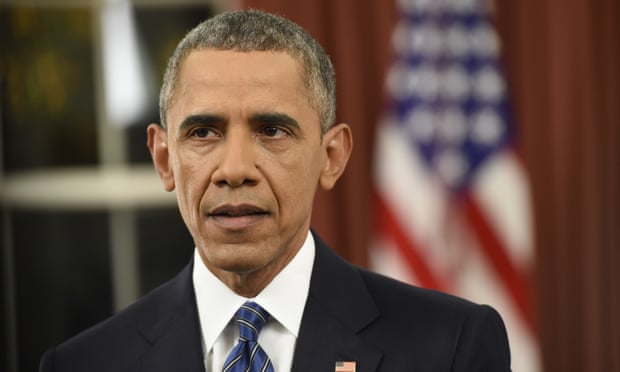 If you listened closely during President Obamas speech to the nation on Sunday night, you would have heard him reference the fact that the US war against Isis which is well over a year old at this point is illegal and unconstitutional.

He didnt phrase it like that of course, but he did remind Americans that Congress has not authorized any military action against Isis despite the fact that we have been dropping bombs on multiple countries in an effort to stop Isis since August of 2014, and despite the fact that such military action is required by both the law and the US constitution.

Heres what Obama did say about the subject on Sunday night:

Finally, if Congress believes, as I do, that we are at war with ISIL, it should go ahead and vote to authorize the continued use of military force against these terrorists.

For over a year, I have ordered our military to take thousands of air strikes against ISIL targets. I think its time for Congress to vote to demonstrate that the American people are united and committed to this fight.

He framed congressional authorization of the war against Isis as a solidarity or symbolic issue like the US Congress would be showing the American public unity or something but its much more consequential than his deceptive wording allows. According to Article I, section eight of the US constitution, only Congress has the power to declare war, not the executive branch, and under the War Powers Act passed after the Vietnam War, Congress must authorize war 90 days after any combat missions begin.

For the past year and four months, the administration has been pretending that the 2001 Authorization for Military Force (AUMF), which made it legal to wage war against those who perpetrated the 9/11 attacks, somehow makes it okay to wage a indefinite, worldwide war against Isis. But Isis did not exist in 2001, and has been enemies with al-Qaida (the group that committed 9/11) for years. Still, the 2001 AUMF is being used to fight Isis in Iraq and Syria, despite the fact that al-Qaida was almost exclusively operational in Afghanistan when Congress first authorized military action.

It makes no logical sense to claim that the authorization to engage in military action against al-Qaida in Afghanistan in 2001 applies to Isis in Syria in 2015, yet that is supposed argument to which the White House lawyers are clinging.

The theory that the ongoing military action against Isis is illegal no matter what you think the merits of fighting the terrorist organization are isnt just my opinion: its the opinion of legal scholars across the political spectrum. Even the former head of the Office of Legal Counsel under the Bush administration Jack Goldsmith has questioned Obamas unprecedented claims to executive authority. Yet in the past year, the illegality of the military strikes in Syria and Iraq has been routinely ignored by almost all members of Congress, save a select few.

What the president said in his speech Sunday is nothing new: he has been half-heartedly calling on Congress to authorize the war since January. But the White House has put forth no language of their own for a bill that would satisfy their requirements, and the administration has made clear they dont think they really need legislation anyways. Their position is, essentially: legal authority would be nice, but we can just pretend we already have it.

Its hard to figure out who is more to blame here: the administration, which has foisted an extremely dubious legal theory on the American public; or Congress, which has been so terrified of doing its job and casting a vote for or against this war that they have continually done everything in their power to pretend that they dont have to.

Sure, writing a resolution to authorize military force against Isis would be fraught: given the war-hungry atmosphere and just how many Republicans (and some Democrats) would want to write it as broadly as possible and leave it in effect for an unlimited amount of time while calling anything less surrendering to the terrorists, a new AUMF could end up giving the administration – or future administrations – more power to wage a broader war, rather than less.

But any decision or indecision could have significant consequences beyond 2016: Republican front-runner Donald Trump has boasted he would bomb the shit out of Isis and, disturbingly, said the US military should kill their families as well. Ted Cruz bragged he would carpet bomb the Middle East. And, if you take away the rhetorical flourishes, its hard to tell how Hillary Clintons policy on Isis is any less hawkish than the Republicans.

The editors of Just Security put together a detailed outline of what a limited authorization against Isis could look like. It includes a demand that the authorization: be geographically- and time-limited; remain in keeping with international law; force the administration to delineate objectives and report its progress in meeting those objectives; and be limited to Isis.

Unfortunately, its probably much too rational for this Congress to pass; its seems hardly worth hoping that this administration, or any administration, accept legislative limits on its power to wage war if it wont accept constitutional ones. But at least they could admit that there are some.