President ends years of political drama and hands environmentalists a big victory with decision to turn down proposal to build 1,700-mile pipeline through US 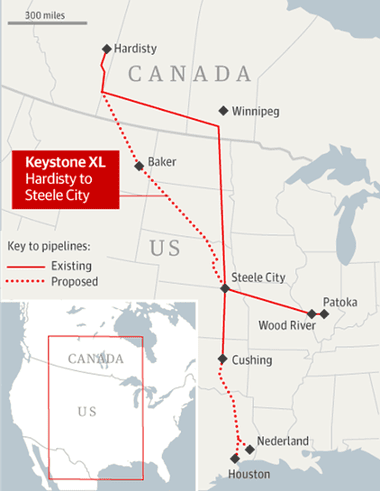 Barack Obama ended seven years of high-wire political drama to reject the Keystone XL pipeline on Friday, saying the decision reflected Americas determination to be a global leader in the fight against climate change.

The move, less than four weeks before more than 190 countries gather in Paris to try to reach a global deal to reduce carbon pollution, reinforces Obamas commitment to making climate change the domestic and international legacy of his second term in the White House even in the face of Republican hostility.

America is now a global leader when it comes to taking serious action on climate change, Obama said from the White House on Friday, flanked by both secretary of state John Kerry and vice-president Joe Biden. Frankly, approving that project would have undercut that global leadership, and that is the biggest risk we face: not acting.

The president went on: Today, the United States is leading on climate change.

Obamas rejection of the Keystone XL was the biggest victory in years for grassroots campaigners, who chained themselves to the gates of the White House and built unlikely alliances with landowners and ranchers in heartland states like Nebraska and Texas, to mobilise opposition to what had once been seen as a routine project.

I feel like the boots have beaten the big oil suits for the first time in our countrys history, said Jane Fleming Kleeb, leader of Bold Nebraska, which had fought the pipelines route across the state.

TransCanada, the Canadian firm behind the pipeline, said it was disappointed with Obamas decision. Today, misplaced symbolism was chosen over merit and science rhetoric won out over reason, Russ Girling, the chief executive of TransCanada, said in a statement.

Keystones rejection would be bad for jobs and the economy in Canada and the US, Girling said.

Shares of TransCanada traded 5% down after the news broke late Friday morning. Yet overall the energy industry was not surprised. Its been sitting on the desk in the presidents office five years, six years, Fadel Gheit, senior energy analyst at Oppenheimer & Co, told CNBC.

By rejecting the Keystone XL pipeline, Obama has thumbed his nose at more than two-thirds of Americans who support reducing energy imports from unfriendly nations [and] who support job creation, said Michael Whatley, executive vice president of Consumer Energy Alliance.

Keystones supporters in Congress, meanwhile, said they would continue working to take the decision out of Obamas hands and force approval of the project.

Clearly, the administration is making a political decision when it comes to Keystone, John Hoeven, a Republican senator from North Dakota, said in a statement.

Thats why it is so important for four more of our colleagues in the Senate to join the 63 that already support the Keystone so that we can override the presidents veto and approve the project congressionally.

When TransCanada first proposed the project to pump crude oil from the tar sands of Alberta to the refineries of the Texas Gulf coast more than seven years ago, Keystone XL was seen as one of just thousands of pipelines across North America.

But over the years Keystone XL grew into a symbol of the fight against climate change.

In the face of almost impossible odds, the campaigners won. Bill McKibben, the founder of 350.org, which had mobilised activists against the project, said Obama was the first world leader to reject an infrastructure project because of climate change.

If were gonna prevent large parts of this Earth from becoming not only inhospitable but uninhabitable in our lifetimes, were gonna have to keep some fossil fuels in the ground rather than burn them and release more dangerous pollution into the sky, the president said.

However, Obama in his comments on Friday had stern words for both sides in the extremely polarised debate over Keystone XL.

He said the project was neither a silver bullet for the economy nor an express lane to climate disaster, and said it was time for both sides to stop using the argument over Keystone as a political cudgel.

After skewering the rhetoric from Keystone supporters and opponents, Obama pivoted to highlight US efforts to fight climate change under his administration.

Obama said his decision was in agreement with the State Departments assessment that the pipeline would not serve the national interests of the United States.

Obama said the State Department review, which sought public opinion and consultation with other agencies, concluded that the pipeline would not make a meaningful long term contribution to our economy, especially as lower oil prices and a recovering labour market had already helped boost job numbers and cut gasoline costs.

In a briefing later on Friday, the State Department said their review had found the pipeline would have no major benefit on energy security or pricing.

But the Canadian company later hit back against the Obama administration in a lengthy statement disputing the findings and arguing that the pipeline would also carry domestic oil from North Dakota shale. TransCanada did not say whether it would resubmit its permit application or walk away from the project.

The Keystone announcement came just two hours after the release of stronger-than-expected US employment data.

But it was the looming UN climate change conference that appeared to have been the strongest factor in the minds of the administration.

The critical factor in my determination was this: moving forward with this project would significantly undermine our ability to continue leading the world in combatting climate change, said Kerry in a statement outlining his departments opposition.

The United States cannot ask other nations to make tough choices to address climate change if we are unwilling to make them ourselves, he added. Denying the Keystone XL pipeline is one of those tough choices but it is the right decision, for America and the world.

The project had seemed like a sure thing seven years ago when TransCanada first sought permission to build on existing lines to create a 1,700-mile pipeline that would pump crude from the tar sands of Alberta to refineries on the Texas Gulf coast. As secretary of state, Hillary Clinton said in 2010 that she was inclined to support the Keystone project.

But rising opposition from campaigners who used the pipeline as a symbol of the folly of expanding fossil fuel production against the threat of climate change low global oil prices, and shifting political realities in the US and Canada eventually sealed its fate.

The International Energy Agency has concluded that the majority of fossil fuels must remain in the ground to avoid catastrophic climate change and Alberta tar sands crude ranks among the most carbon-intensive fuel sources on the planet.

The Keystone XL pipeline would have been like a giant straw running through America, transporting the dirtiest oil in the world to the thirstiest foreign markets, said Ed Markey, a Democratic senator from Massachusetts and a longtime opponent of the pipeline.

Actor and environmentalist Robert Redford thanked Obama and the activists who banded together to demand a stop to this short-sighted, destructive fossil fuel project.

Obama had been widely expected to reject the project ahead of the Paris climate change conference, but the timing was sealed earlier this week when the State Department turned down a request from TransCanada to pause its review of its permit application.

The decision reinforces a more active phase in Obamas second term as he attempts to cement his legacy on a range of issues before leaving office in January 2017.

The timing was also dictated by events in Canada, and the swearing-in earlier this week of a new Liberal prime minister, Justin Trudeau, who has moved swiftly to distance himself from the pro-oil stance of his predecessor, Stephen Harper, and commit to fighting climate change.

Trudeau, though ostensibly a supporter of Keystone, had opposed Harpers aggressive lobbying for the project. His new cabinet, sworn in on Wednesday, also included a new position of environment and climate change minister.

Hitherto, Obamas outright opposition to Keystone has been complicated by mixed support in Congress, where many moderate Democrats feared being seen as unsupportive of the unconventional oil and gas boom in North America.

But Clintons decision to come out decisively against the pipeline means all the Democratic presidential candidates are now opposed to the project, leaving the risk instead that it could be a Republican president that approves the pipeline if the process is left open.

Bernie Sanders was quick to congratulate Obama on the decision on Thursday, pointing out that Clinton was also a late convert. It is insane for anyone to be supporting the excavation and transportation of some of the dirtiest fuel on earth, he said. As someone who has led the opposition to the Keystone pipeline from day one, I strongly applaud the presidents decision to kill this project once and for all.

Obama is also addressing his presidential legacy on issues such as his promise to shut Guantanamo Bay, where officials say he may make a further attempt to bring prisoners to US jails over the coming weeks.

But there was particular pressure over Keystone, which had become a totemic issue for many environmentalists, in the weeks leading up to the Paris conference, where Obama is expected to call on other world leaders to take more active steps toward reducing carbon emissions.