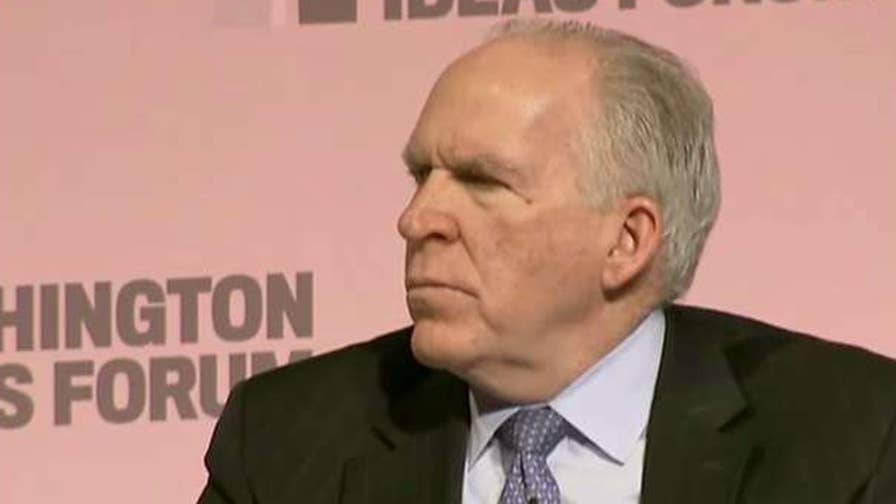 The announcement comes just a few weeks after Sanders said President Trump was considering rescinding security clearances from several former top intelligence officials, including former FBI Director James Comey, who “politicize, and in some cases actually monetize, their public service and their security clearances in making baseless accusations about improper contact with Russia.”

Brennan led the CIA for nearly four years under the Obama administration. Earlier this year, he joined MSNBC and NBC News as a contributor and senior national security and intelligence analyst.

He has been critical of the Trump administration and has called the president “paranoid” and a “charlatan.” He said Trump’s meeting with Russian President Vladimir Putin in Helsinki was “nothing short of treasonous.”

Donald Trump’s press conference performance in Helsinki rises to & exceeds the threshold of “high crimes & misdemeanors.” It was nothing short of treasonous. Not only were Trump’s comments imbecilic, he is wholly in the pocket of Putin. Republican Patriots: Where are you???

Sanders said Brennan had been “leveraging” the clearance to make “wild outbursts” and claims against the Trump administration.

Trump himself lumped Brennan in with some “of the biggest liars and leakers in Washington” in a February tweet.

Read on for a look at who else could lose their security clearances.

James Comey led the FBI from 2013 until he was abruptly fired in May 2017. Trump, who has repeatedly castigated Comey on Twitter, said he could not “effectively lead” the bureau. The president was highly critical of Comey’s handling of the investigation into Hillary Clinton’s emails and the Russia investigation.

Comey was tapped as a U.S. attorney by former President George W. Bush before Obama appointed him to lead the FBI. After he was fired, he wrote a book called, “A Higher Loyalty: Truth, Lies and Leadership.”

Hayden has been an outspoken critic of Trump, especially in his book, “The Assault on Intelligence: American National Security in an Age of Lies.” He also encouraged people not to work for the Trump administration during an interview with Yahoo earlier this year.

Before the announcement, Hayden said revoking his security clearance wouldn’t “have any effect on what I say or write” because he does not attend classified briefings.

I dont go back for classified briefings. Won’t have any effect on what I say or write

Andrew McCabe was fired as deputy director of the FBI after it was determined that he lied to investigators reviewing the bureau’s probe of Hillary Clinton’s email server.  (AP Photo/Alex Brandon)

FBI Deputy Director Andrew McCabe was fired in March 2018. Trump praised the firing as “a great day for the hard working men and women of the FBI” in a tweet, calling McCabe a “choirboy.”

He was fired just days before he would have been eligible for a lifetime pension after it was determined he lied to investigators reviewing the bureau’s probe of Clinton’s email server.

Susan Rice, who served as the National Security Advisor under former President Barack Obama, has been critical of Trump’s relationship with Russia.  (AP Photo)

After serving as ambassador to the United Nations, Rice was the National Security Advisor for Obama from 2013 to 2017.

Like others, she was highly critical of Trump’s relationship with Russia and called the July summit with Putin a “historic mistake.” She also blasted Trump earlier this year when he said Obama “allowed Russia to take Crimea.”

Fox News’ Brooke Singman and The Associated Press contributed to this report.