The outgoing president is leaving a party in shambles. Sowing discord for the fourth estate on the eve of an anti-press presidency will only worsen things 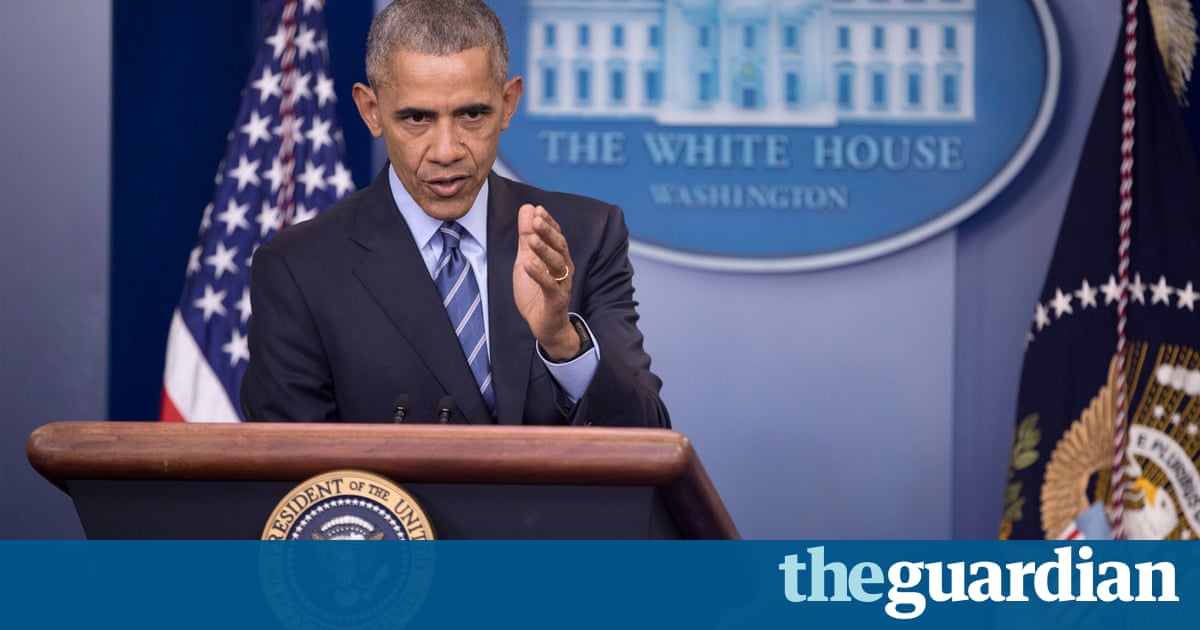 President Barack Obama is planning to stick around Washington DC for a time after leaving the White House, but that doesnt mean he likes this town.

In his last press conference of 2016 on Friday, the outgoing president scolded the media, especially conservative outlets, and the nations partisan establishment, whom he blamed for paving the way for Donald Trumps upset victory over Hillary Clinton.

The mainstream media may now be busy chasing salacious gossip and the president-elects latest tweet, but to undermine the Washington press corps undermines the outgoing presidents cause. Obama, rank and file Democrats and Republican leaders who actually care about their partys futures need to reinstate trust in facts and the news organizations that still believe in them. A sweeping, back-handed critique of the media sets that national, even global, cause back.

The usually calm and smooth Obama gave the media a fiery tongue lashing for obsessively covering Hillary Clintons leaked emails and for covering her in a sexist manner.

This was an obsession that dominated the news coverage, the president lectured a room overflowing with reporters. I do think its worth us reflecting how it is that a presidential election of such importance, of such moment, with so many big issues at stake and such a contrast between the candidates, came to be dominated by a bunch of these leaks? What is it about our political system that made us vulnerable to these kinds of potential manipulations?

The president was careful not to flat-out blame Russian President Vladimir Putin for tilting the elections outcome, as some in his party have started doing. But he questioned the medias role in highlighting the leaked documents that the FBI and CIA argue came from Russia, which played a part in keeping Clintons negative rating at record highs.

But the presidents assessment seems willfully shortsighted. Sure, Hillary Clinton lost the White House, ending his attempt to get what would have widely been viewed as him securing a coveted third term. But the real story from this election and from his eight-year tenure as head of the Democratic Party is that hes leaving office with his party in historic shambles.

Since he won in 2008, Democrats have lost more than 900 seats in state legislatures and Republicans now control the House, Senate and dominate governors mansions nationwide. What did Democrats do to right the ship? They reelected Nancy Pelosi as the leader of their party in the House of Representatives. And they picked one of outgoing Senate Democratic Leader Harry Reids top lieutenants to take over the reins in the Senate. And Obamas stay the course attitude was similarly on display in the pressroom, where he emphasized, yet again, a peaceful transfer of power.

Yes, the election was disturbingly infiltrated by a foreign power, but Clinton and the Democratic Party lost because they ran to the far left while forgetting their former base in Middle America. To recapture the White House and Congress, Democrats need to regain the trust of the working class.

With fear that the president-elect will cut off access to the White House for news outlets that are critical of him, or even those doing honest reporting, this is a time to rally around the nations media, not to contribute further to the publics skepticism about things we once called facts.

The president was onto something when he also lashed out at the conservative messaging machine, which will soon have a seat in the White House when former Breitbart CEO Steve Bannon moves in as president-elect Trumps chief strategist, for becoming an echo chamber of fiery partisan accusations and outright lies.

If fake news thats being released by some foreign government is almost identical to reports that are being issued through partisan news venues, than its not surprising that that foreign propaganda will have a greater effect, because it doesnt seem that farfetched for some of the things people are seeing from domestic propagandists, the president said as his voice rose.

One hopes Republican leaders tuned in to Obamas press conference, because their strategy to undermine Obama at every turn is what gave rise to their partys base turning to conspiracy theorists and far-right publications for their news. The GOP and its wide array of conservative commentators need to rein in their base and return them to reality; our shared reality, where facts are facts and the nations future is more important than partisan gains.