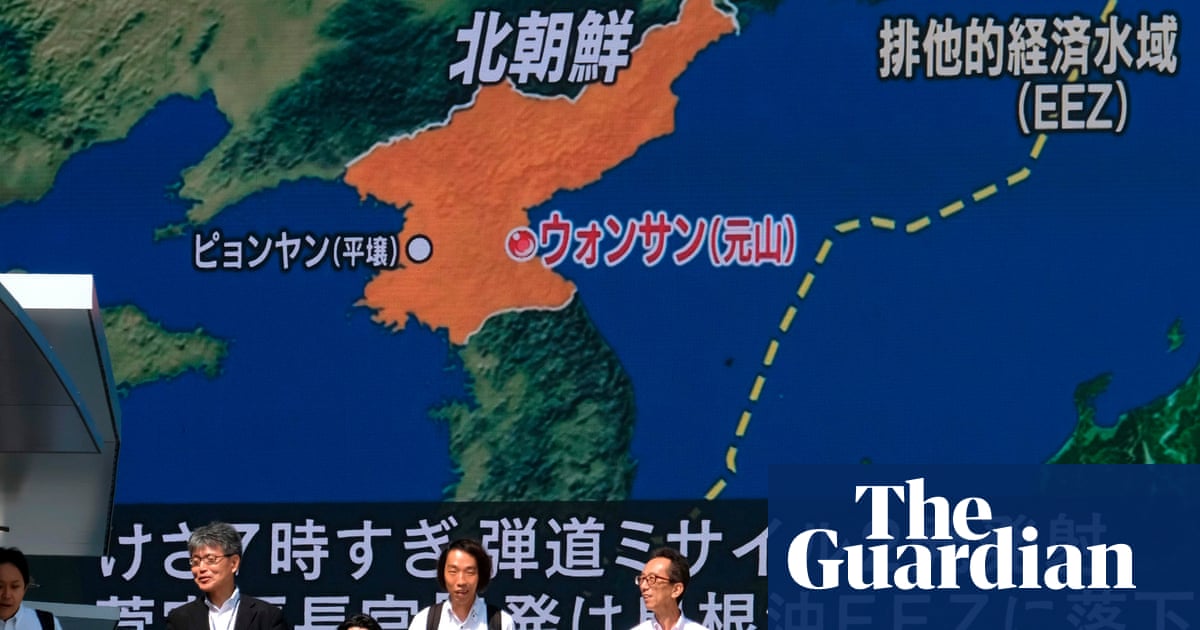 North Korea has fired what appeared to be a submarine-launched ballistic missile, in an apparent show of strength by Pyongyang before it resumes nuclear talks with the US at the weekend.

Japan said the missile had landed inside its exclusive economic zone, adding that there were no immediate reports of damage to shipping or aircraft.

South Korea’s joint chiefs of staff (JCS) said it had detected a ballistic missile fired from Wonsan, in Gangwon province, towards the sea. It travelled about 280 miles (450km) in an easterly direction at a maximum altitude of 910km.

The missile was “believed to be one of the Pukkuksong models”, the JCS said in a statement, referring to a line of submarine-launched ballistic missiles North Korea was developing before it suspended long-range missile and nuclear tests and began denuclearisation talks with the US in 2018.

The ability to reliably launch ballistic missiles from submarines would significantly expand North Korea’s military options, enabling it to deploy missiles far beyond the Korean peninsula and giving it a “second-strike” capability in the event of an attack on its military bases.

Japan’s coastguard urged vessels in the area of the Japan Sea – known in Korea as the East Sea – to pay attention to further information and not to approach any debris.

The Japanese prime minister, Shinzo Abe, said he “strongly condemned” the launch, adding that it violated UN security council resolutions. “We will continue to work closely with the United States and the international community, and do all we can to remain highly vigilant and protect the lives of the Japanese people,” he added.

Tokyo had initially said that two ballistic missiles had been launched, but later said two sections of the same missile appeared to have crashed into the sea.

The launch was the ninth since Donald Trump and the North Korean leader, Kim Jong-un, met at the heavily guarded demilitarised zone (DMZ) between the two Koreas in June, and came soon after Pyongyang announced it would hold working-level talks with the US on Saturday – a development that could potentially break months of stalemate over North Korea’s nuclear weapons programme.

Talks aimed at dismantling North Korea’s nuclear and missile programmes have been stalled since the second summit between Trump and Kim in Vietnam in February ended without a deal.

Trump has played down North Korea’s recent series of short-range launches, saying in September the US and North Korea “didn’t have an agreement on short-range missiles” and that many countries test such weapons.

After supervising tests of what North Korea described as a “newly developed super-large multiple rocket launcher” last month, Kim was quoted by state media as saying the system would require a “running fire test” to complete its development.

North Korea could also be demonstrating its anger after South Korea displayed some of its newly purchased US-made F-35 stealth fighter jets during its Armed Forces Day ceremony on Tuesday.

Harry J Kazianis, senior director of Korean studies at the Centre for the National Interest, in Washington, said North Korea seemed to be “making its negotiating position quite clear” ahead of this weekend’s nuclear talks.

He added: “North Korea’s message is clear: our capacity to cause trouble is increasing by the day. Pyongyang seems set to push Washington to back off from past demands of full denuclearisation for what are only promises of sanctions relief.

“If talks do indeed fail once again, North Korea will conduct many more missile tests just like today – and perhaps nuclear weapons tests – driving tensions back to what could be another dangerous showdown.”

It is not the first time North Korean missiles have landed in Japan’s exclusive economic zone – it last happened in November 2017 – but short-range missiles launched in recent months have fallen short of the zone, which stretches 230 miles from the country’s coast