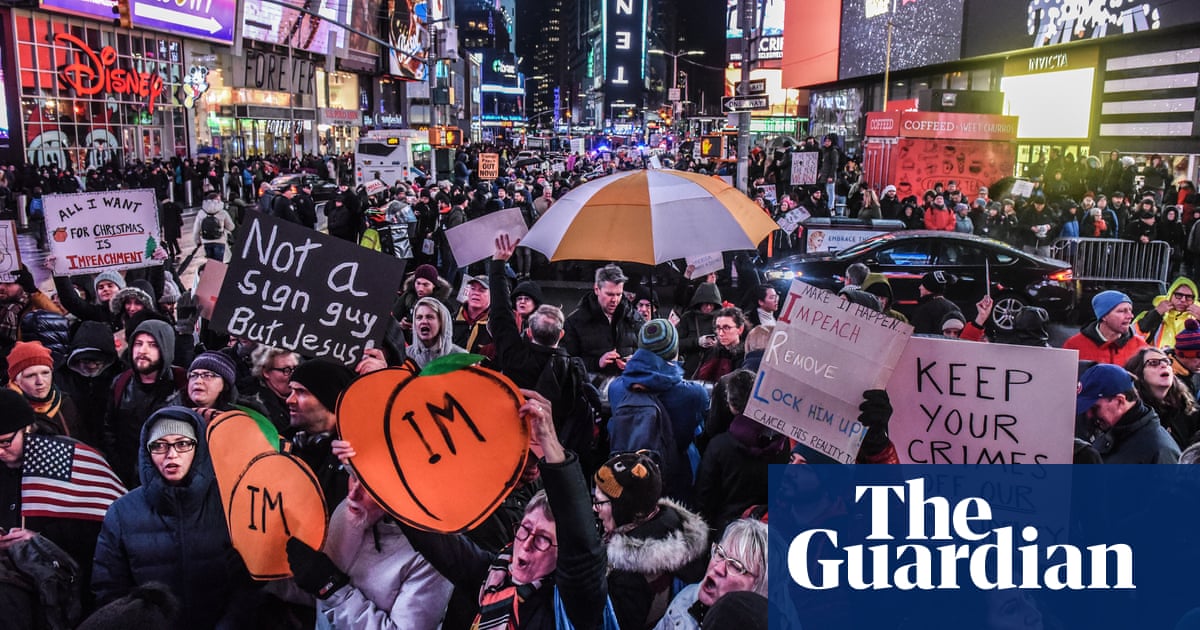 Hours before Congress began to convene for Wednesday’s vote to make Donald Trump only the third US president in history to be impeached, thousands of Americans from across the country gathered to make their views plain under the banner: “Nobody is above the law”.

From snowy Portland in Maine to an even chillier Anchorage in Alaska, 4,500 miles away, protesters turned out on the eve of the impeachment vote to lend their voices to the effort to hold Trump accountable for the abuse of power and obstruction of Congress of which he is accused. Organisers of the nationwide demonstrations, drawn from a coalition of groups including Indivisible, MoveOn and Greenpeace, recorded 617 events nationwide.

The protests ranged from tiny to thousands strong. In Concord, Massachusetts, a small crowd gathered at the historically poignant spot of the Battle of Lexington and Concord that sparked the revolutionary war.

They waved placards that quoted one of the founding fathers, John Adams, who said: “Facts Are Stubborn Things”. That paean to truth was poignant too. At the very moment the Concord protesters were braving the sleet, Trump was delivering a six-page letter full of insults and ranting to Nancy Pelosi, the Democratic speaker of the House, denouncing the impeachment process.

According to the chief fact-checker of the Washington Post, the letter contained at least “a couple dozen” factual errors or misleading statements.

In New York City, the historical theme was echoed in Times Square where a crowd of more than a thousand unfurled a giant banner bearing the words of Article II, section four of the US constitution which lays out the terms of impeachment. Shannon Stagman of Empire State Indivisible, an organizer of the New York rally, told Reuters that the event marked a crucial moment for American citizens.

“It’s important to come out and say we recognize that crimes were committed here, that this president has abused his power and we’re not OK with letting that slide,” she said.

Big cities and small towns brought local flavors to bear on the demonstrations. In Houston, Texas, they chanted: “Trump needs fixin’, just like Nixon”, while in Raleigh, North Carolina, they sang to the tune of the Christmas carol: “We wish you a good impeachment / And removal right now”.