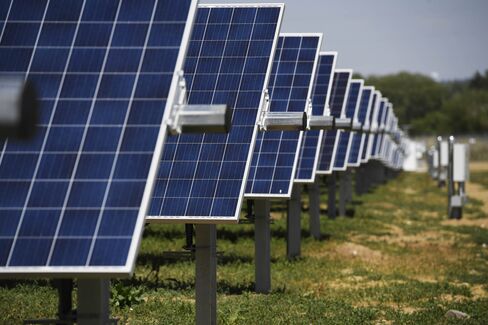 A growing number of consumers are buying into community solar farms that allow renters and apartment dwellers to access renewable energy produced on neighborhood plots that can be small enough to host a little league baseball game. Some are so modest theyre referred to as solar gardens.

Conventional solar farms such as Berkshire Hathaway Inc.s 550-megawatt Topaz plant in California can spread over hundreds or thousands of acres. They sell their electricity mainly to utilities through long-term contracts. Rooftop panels, meanwhile, are mainly available for private homes, and can only work on about 30 percent of U.S. houses. Community farms offer a middle road.

Under the community farm option, consumers who buy into a project dont directly use the energy produced. Thats sold directly to a local utility. Instead, their electric bills are reduced, based on how much the utility buys from the farm. In most states the arrangement is governed by the same regulations that require utilities to buy solar power from rooftop systems at retail rates.

Community solar farms are already permitted in 14 states, with about 100 megawatts in operation, enough to power about 30,000 homes. That includes California, the biggest solar state, and New York, which is planning a major overhaul of its energy policies.

Over the next five years, the amount of power available may rise to about 1.8 gigawatts as more states encourage development and individuals take advantage of federal incentives, according to the Washington-based Solar Energy Industries Association. The U.S. Energy Department announced last month it would provide $287 million to help finance 280 megawatts of solar projects in low- and moderate-income communities.

In Rockford, Minnesota, one of the first of these projects supplies 32.5-kilowatts to about a dozen homes and an office building from panels stretched out on a hilly, ballpark-sized field. In Freetown, Massachusetts, a 1.1-megawatt plant built last year by Princeton, New Jersey-based NRG Energy Inc., provides power to about 160 homes from an 8-acre plot.

New York State Electric & Gas Corp. has agreed to buy power from the states first community solar project, which began construction in April and is designed to provide 582 kilowatts to 100 consumers who live in or near the city of Troy. Over two decades, a local resident may be able to save more than $31,000 on their electric bills, according to the developer, Clean Energy Collective LLC. As an incentive, the group is donating 10 kilowatts of panels to five low-income families.

It was crazy, Masterjohn said in a telephone interview. Regulators have become very interested in community solar. I think it will grow as big as rooftop in half the time.

There are some differences from rooftop power. People who sign solar leases — the majority of the residential market — become customers of the lease companies. With community solar, they continue to buy power from their local providers, and the utility doesnt lose them as customers.

Also, community projects use the grid to deliver power, and help pay for maintaining the utilities infrastructure. That makes them less of a threat to traditional power companies, which are losing revenue to solar leasing providers.

Utilities see community solar as a bit more friendly, said Drew Warshaw, vice president of community solar at NRG Energy. By definition we have to use their transmission and distribution system, we pay for any upgrades needed and they continue to have a relationship with the customer.

Still, utilities are closely watching how this initiative plays out, mainly related to lost revenue, according to Chief Executive Officer Jim Torgerson of Avangrid Inc., which owns utilities in New York and New England.

Shared solar has much better economies of scale than rooftop but net metering issues really have to get resolved, he said in a phone interview. We think its worth the wholesale price of power, not the retail rate.

Michael Maravelias, a sales manager for Airgas Refrigerants in Massachusetts, is concerned about climate change and wanted to do his part to reduce consumption of fossil fuels, but the roof on his home is already 15 years old and would need to be replaced long before the panels. He also had concerns that installing a system could damage his home, or that firefighters may hesitate if they saw a system on his roof.

Last year, Maravelias contracted to buy power from an NRG solar farm about 40 miles (64 kilometers) from his home in Plymouth, Massachusetts. Now his monthly power bill is about 15 percent cheaper.

I didnt want anyone drilling holes in my roof, Maravelias said by phone. Plus they look ugly and could be a fire hazard. Now you just dont need to install solar on your roof to get the benefits.

Heres What Trumps Tariffs on U.S. Imports Are Doing to Markets