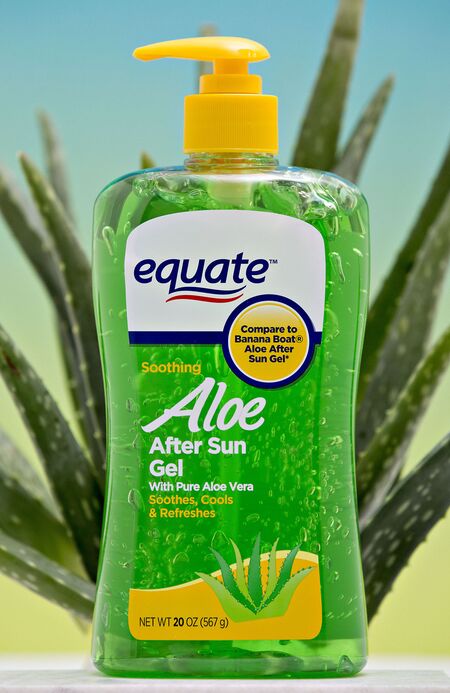 The aloe vera gel many Americans buy to soothe damaged skin contains no evidence of aloe vera at all.

Samples of store-brand aloe gel purchased at national retailers Wal-Mart, Target and CVS showed no indication of the plant in various lab tests. The products all listed aloe barbadensis leaf juice another name for aloe vera as either the No. 1 ingredient or No. 2 after water.

Theres no watchdog assuring that aloe products are what they say they are. The U.S. Food and Drug Administration doesnt approve cosmetics before theyre sold and has never levied a fine for selling fake aloe. That means suppliers are on an honor system, even as the total U.S. market for aloe products, including drinks and vitamins, has grown 11 percent in the past year to $146 million, according to Chicago-based market researcher SPINS LLC.

You have to be very careful when you select and use aloe products, said Tod Cooperman, president of White Plains, New York-based ConsumerLab.com, which has done aloe testing.

Aloes three chemical markers acemannan, malic acid and glucose were absent in the tests for Wal-Mart, Target and CVS products conducted by a lab hired by Bloomberg News. The three samples contained a cheaper element called maltodextrin, a sugar sometimes used to imitate aloe. The gel thats sold at another retailer, Walgreens, contained one marker, malic acid, but not the other two. That means the presence of aloe cant be confirmed or ruled out, said Ken Jones, an independent industry consultant based in Chapala, Mexico.

Target Corp. declined to comment. Spokesmen for Wal-Mart Stores Inc., CVS Health Corp. and Walgreens Boots Alliance Inc. said their suppliers confirmed to them that their products were authentic. The four retailers have 23,000 outlets between them.

The tests used a technique called nuclear magnetic resonance. It found additives such as maltodextrin and other ingredients, like triethanolamine, an emulsifier. In all the samples, lactic acid, a component that indicates degraded aloe vera, was absent.

Fruit of the Earth, a Fort Worth, Texas-based aloe brand founded in 1980, said it made the gels for Wal-Mart, Target and Walgreens. Fruit of the Earth said its aloe supplier was Ormond Beach, Florida-based Concentrated Aloe Corp., which said it uses fair trade, organic aloe thats farmed and processed in Guatemala.

Weve been in the business a long time and we know where the raw ingredients come from, John Dondrea, Fruit of the Earths general counsel, said in a telephone interview. We stand behind our products.

Tim Meadows, president of Concentrated Aloe Corp., said that nuclear magnetic resonance isnt reliable for cosmetics because the presence of multiple ingredients can cause interference and theres no way to test for aloe in finished products. He added that maltodextrin isnt an adulterant because it can be used in the drying process, and while some ways of processing aloe remove acemannan, that doesnt mean the aloe isnt real, he said.

Acemannan has been misinterpreted, Meadows said. The cosmetics industry requires highly processed aloe. How that affects acemannan is anybodys guess.

Though its true that nuclear magnetic resonance isnt a test thats designed to study aloe vera in cosmetics, the lab results suggest that the plant is not a major component of the products, said James Neal-Kababick, director of Flora Research Labs in Grants Pass, Oregon, which tests and researches natural products. Jones, the consultant who also reviewed some of the tests, said he didnt see evidence of aloe or interfering substances.

The CVS aloe gel was made by Product Quest Manufacturing LLC. The Daytona Beach, Florida-based firm declined to comment or identify its supplier.

Several law firms, including Bloomfield Hills, Michigan-based Barbat, Mansour & Suciu PLLC, have filed lawsuits against the four retailers after separate testing failed to find aloe in the companies private-label products. Theyre seeking class-action status and restitution for all the customers who they say were misled.

See also: The Parmesan Cheese You Sprinkle on Your Penne Could Be Wood

No reasonable person would have purchased or used the products if they knew the products did not contain any aloe vera, attorneys wrote in a complaint filed in September in Illinois on behalf of plaintiffs represented by 10 law firms.

Fruit of the Earth, Wal-Mart, Target, CVS and Walgreens denied the allegations.

Independently, ConsumerLab.com said it had Fruit of the Earth brand Aloe Vera 100% Gel tested using nuclear magnetic resonance and found no evidence of aloe, while a competing brand, Aubrey Organics, did contain the markers that indicate aloe. ConsumerLab said it tested a dozen aloe products, including pills and juices, and just half the items appeared to meet the claims on their labels.

Acemannan is thought to give the plant its beneficial properties, said Jane Wilson, executive director of the International Aloe Science Council in Silver Spring, Maryland, which represents the industry.

Jesper Hummeluhr, founder of Copenhagen-based cosmetics maker Aloe Vera Group APS, said that if acemannan isnt detected, the aloe was degraded during the manufacturing process or the product contains no aloe. Hes been making aloe products since 1989.

What you have there is not aloe, said Hummeluhr, who reviewed some of the results without being told the name of the brands. It could be a lot of water and a little bit of aloe added.

Acemannan is as much as 15 percent of aloes makeup. Levels below 0.01 percent of dry weight wont register in the tests. Fruit of the Earths Dondrea declined to say how much aloe is in the firms gels, citing proprietary formulations.

Aloe vera is a succulent farmed in hot climates like Texas and Mexico. Its spiky leaves contain a clear goo that people have used as a topical ointment to treat burns and other skin problems for millennia. Known as the plant of immortality in ancient Egypt, it was depicted on stone carvings 6,000 years ago, a burial gift for pharaohs, and its been used as a folk remedy for conditions from diabetes to epilepsy, according to the National Center for Complementary and Integrative Health.

Concerns over imitation aloe arent new. The industry created the International Aloe Science Council in the 1980s as more and more products hit store shelves that contained little or no aloe, said Wilson, the groups executive director. Maltodextrin, a light-colored powder that looks like aloe powder and is used as a food additive, was a common filler or substitute. Maltodextrin is cheaper than aloe, Wilson said.

Jeff Barrie, a Keene, New Hampshire-based sales manager at AloeCorp, one of the biggest suppliers of raw aloe powder, said hes seen competitors beat his lowest prices by half. That means theyre not selling aloe, he said. Aloe powder can cost as much as $240 a kilogram, he said, while the same amount of maltodextrin can cost a few dollars.

Making just 1 kilogram of aloe powder, the ingredient used in finished goods like gels and drinks, requires 400 kilos (882 pounds) of aloe leaves, Barrie said. The process involves removing rinds from the leaves and dehydrating the remaining aloe into a powder form.

Aloe is all harvested by hand, Barrie said. Its an involved process and its not cheap.

Theres no conclusive body of scientific research affirming aloes healing properties. While some studies have shown a benefit for burns and cuts, theres nothing to hang your hat on in terms of clear evidence, partly because there hasnt been enough research, said D. Craig Hopp, a program director at the National Center for Complementary and Integrated Health in Bethesda, Maryland.

Theres a lot of people that swear by aloe and love it, and if you put it in your product, youll sell more of it whether its a cream or a lotion for sunburns, said Gary Shreeve, a vice president of global operations at Scottsdale, Arizona-based Forever Living Products, which sells aloe certified by the International Aloe Science Council.

Some people are old school about aloe. Rather than buying aloe products, they just keep the succulent around the house.

Meredith Zielke, a documentary filmmaker in Chicago, is one of many aloe lovers who have a simple remedy. She keeps the plant in her home to cool her skin when her Lyme disease acts up. And it works, she said.

I like just having it at home to snip it from there, Zielke said. I just like the comfort and the knowledge of having a plant in your house that can actually heal you.