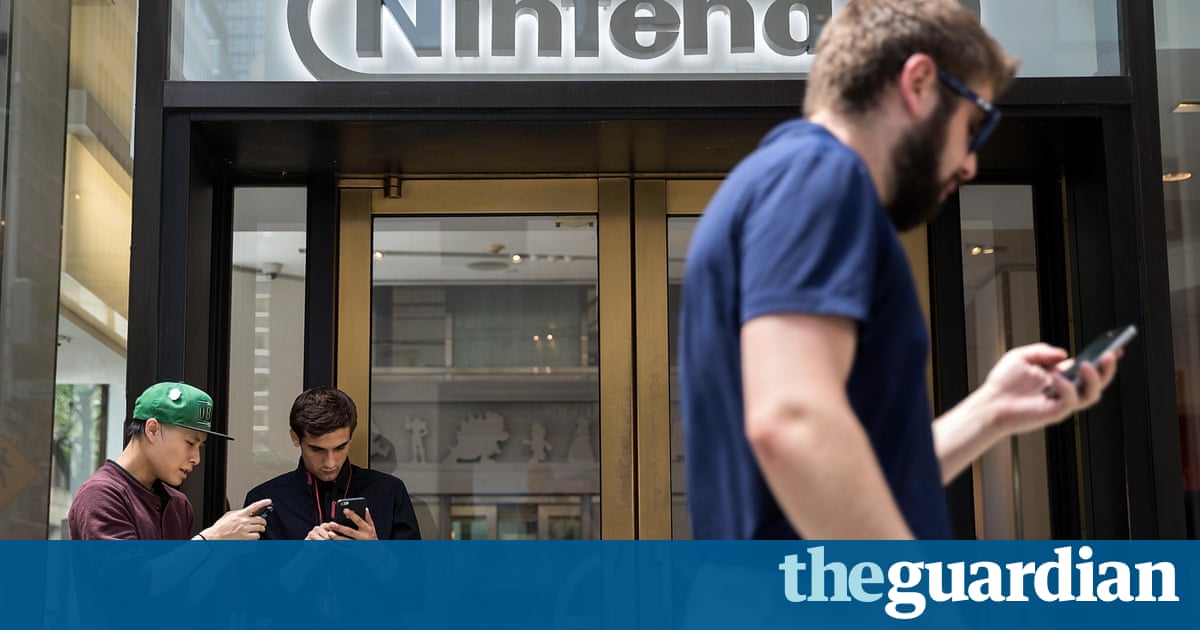 Investors are still trying to catch some of the runaway success of Pokmon Go, extending the gain for Nintendo shares to more than 50% in three trading days since the game was launched.

Nintendos shares rose 12.8% to 22,860 in Tokyo on Tuesday, taking total gains in the past three days to 53%. The rise has added 7bn to the companys market value since the latest version of its 21-year-old game was made available on 7 July.

Pokmon Go is the first edition of the game whose slogan is gotta catch em all for mobile phones and lets players apprehend the eponymous monsters using their smartphone cameras.

It has turned Nintendo from a reluctant adopter of mobile gaming to an augmented reality trailblazer that has taken gaming off the sofa and into uncharted territory.

Nintendo is only indirectly involved with the game but it owns 33% of the Pokmon company, which holds the Pokmon franchise and develops the main series of games, and it has a stake in Niantic, the former Google subsidiary that developed Pokmon Go.

The game is free but it makes money by tempting people to buy extra PokBalls and other in-app features and the signs are that it is highly compulsive.

So far, Pokmon Go is officially available only in the US, Australia and New Zealand. It immediately became the top free app in the US and was so popular on launch day that the servers briefly failed.

The app has been downloaded more than 5m times on Android and has overtaken dating service Tinder for active users. It is also rapidly approaching the daily active Android users of Twitter. With servers still under strain, its introduction to the UK and other countries has been delayed.

Android users have taken to sideloading the game, letting them get around Pokmons staged rollout but criminals have already produced malware-infected versions that, once installed, give hackers access to the users phone and information.

In further evidence of the underworld capitalising on the craze, armed robbers used it to lure victims to an isolated trap in Missouri on Sunday. People in the US have also been injured chasing monsters into hazardous spots and, on Friday, a teenager found a dead body while playing the game. There was also a report of how the game led some players to a Hells Angels club.

These problems, along with the fickle nature of gamers, have caused analysts to warn that the bonanza could prove short-lived.

Michael Pachter, an analyst at the stockbroker Wedbush Securities, told Bloomberg News: The game requires couch potatoes to get off the couch, and the novelty will wear off when they get tired or when their phone batteries die. I give this four months at the top of the charts, then it will fade.

Nintendo, whose other famous characters include Super Mario Bros, came late to mobile gaming as it sought to protect its console business. It has promised four more smartphone games by the end of March.