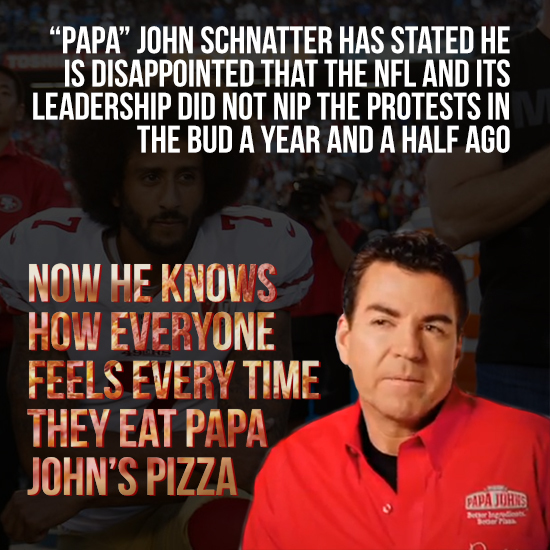 If your business can be crippled by black people protesting injustice, you probably aren’t running a great business. Still, that’s what the owner of Papa John’s is claiming since sales of his decidedly meh pizza have fallen.

I somehow doubt the titular John of Papa John’s understands, or even cares to look into, the reasons NFL ratings are in a slump. He’s far too busy telling his employees he’d rather cut their hours than pay for their health insurance. For a guy who made his fortune selling pizzas that are a half-step above Digiorno-quality, whose only brilliant innovation was adding a plastic cup of garlic sauce in the box with every pie, he may not be the brightest fella.

A cursory Google search brings up a ton of articles digging into the numbers behind the NFL’s ratings decline — which, by the way, isn’t much of a decline compared to the rest of the television landscape. Network TV ratings have been steadily falling for some time, and football games are getting caught in the net. One of the overarching factors include a whole new generation of fans who don’t watch TV the way past generations used to.

Even Fox chief executive officer James Murdoch, son of Rupert Murdoch, thinks that the ratings decline nothing to do with player protests. He believes there is an “over proliferation” of football, meaning there are so many games and so many places to watch them that the NFL overstretch itself as a brand, since modern technology has spread viewing habits across dozens of platforms instead of just the one TV in everybody’s living room.

You can watch highlights on your phone as a game unfolds, or just watch all the scoring plays on a service like NFL Red Zone so you don’t have to sit through a three-hour broadcast of over 100 commercials with only 11 minutes of actual gameplay wedged in between. Like every other part of the broadcast industry, numbers are down because people don’t feel beholden to the old ways of doing things.

Blaming protesters for declining ratings that result in fewer people eating your uninspired pizza is intellectually lazy and morally stupid. Besides, if all it took for diehard football fans to stop watching games and eating pizza was black people protesting police brutality, then maybe they didn’t like pizza, football, or black people that much to begin with.

Subscribe to our YouTube channel, and check out Perhaps President Donald Trump Is Actually A Dumb Liar With A Terrible Memory, and watch other videos you won’t see on the site!