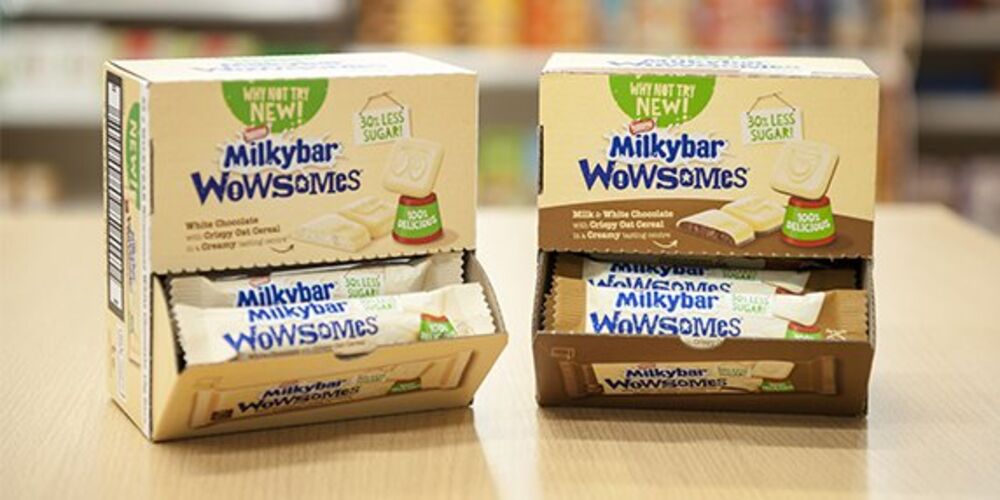 Nestle SA plans to begin selling slimmed-down Milkybar Wowsomes chocolates in the U.K. and Ireland in the first implementation of a new technology that promises the same sweetness with 30 percent less sugar.

The Swiss food giant said the new candy bars will be available on store shelves next week. It’s introducing them in markets where government and consumer groups are putting pressure on the food industry to reduce calories in snacks amid rising rates of obesity and diabetes, especially among children.

The new products are the first application of a technology Nestle unveiled in 2016 that makes the structure of sugar more porous, so that a smaller amount produces the same sweetness. The company has likened the process to hollowing out sugar crystals.

The U.K. government has set out to fight childhood obesity, targeting sugar reductions of at least 20 percent by 2020 in a range of products. The move comes after the introduction in Britain and elsewhere of sugar taxes to help fight childhood obesity and diabetes, which affects four times as many people now as in 1980.

The new Milkybar candies will come in two versions — white chocolate or a mix of white and milk chocolate — and have creamy centers full of crispy oats. The largest individually wrapped product will have 95 calories per bar.

Nestle has lost market share in the U.K., the world’s third-largest chocolate market, over the last five years, according to research firm Euromonitor. The company says it has cut added sugar in a range of products by 8 percent on average between 2014 and 2016. It also has pledged a reduction of a further 5 percent on average by 2020.

As consumers increasingly watch their waistlines and opt for healthier treats, companies across the industry have been boosting efforts to offer alternatives without alienating shoppers. Cargill Inc. started the commercial production of a new stevia sweetener after working with Swiss biotechnology company Evolva Holding SA to remove its bitter aftertaste.