Epidemics of mental illness are crushing the minds and bodies of millions. Its time to ask where we are heading and why 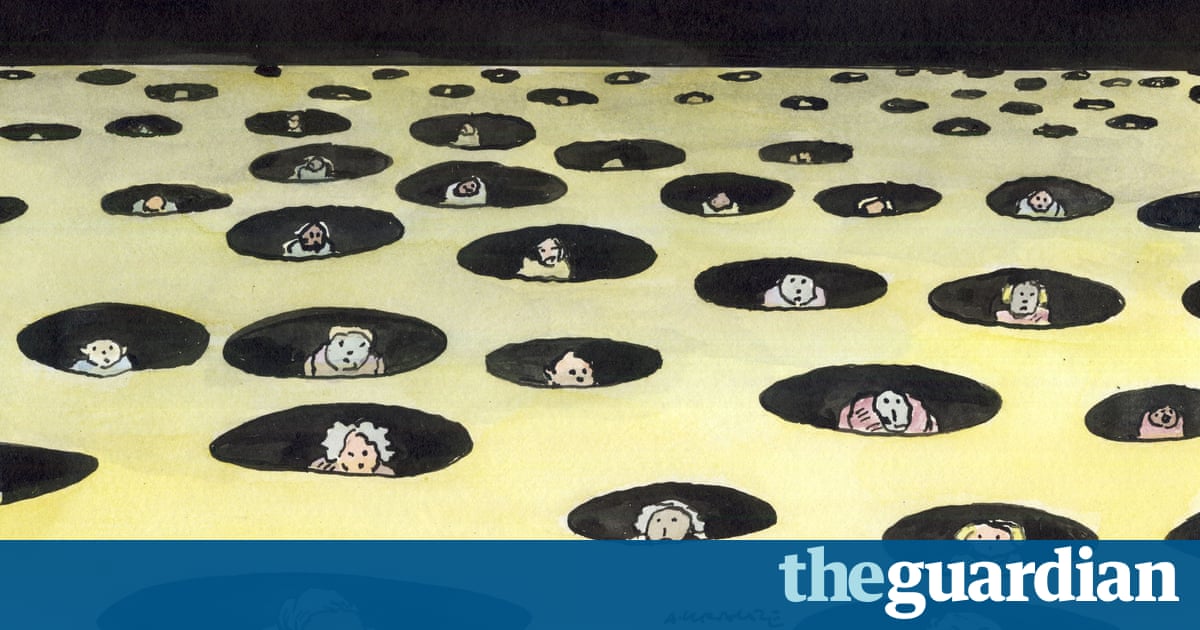 What greater indictment of a system could there be than an epidemic of mental illness? Yet plagues of anxiety, stress, depression, social phobia, eating disorders, self-harm and loneliness now strike people down all over the world. The latest, catastrophic figures for childrens mental health in England reflect a global crisis.

There are plenty of secondary reasons for this distress, but it seems to me that the underlying cause is everywhere the same: human beings, the ultrasocial mammals, whose brains are wired to respond to other people, are being peeled apart. Economic and technological change play a major role, but so does ideology. Though our wellbeing is inextricably linked to the lives of others, everywhere we are told that we will prosper through competitive self-interest and extreme individualism.

In Britain, men who have spent their entire lives in quadrangles at school, at college, at the bar, in parliament instruct us to stand on our own two feet. The education system becomes more brutally competitive by the year. Employment is a fight to the near-death with a multitude of other desperate people chasing ever fewer jobs. The modern overseers of the poor ascribe individual blame to economic circumstance. Endless competitions on television feed impossible aspirations as real opportunities contract.

Consumerism fills the social void. But far from curing the disease of isolation, it intensifies social comparison to the point at which, having consumed all else, we start to prey upon ourselves. Social media brings us together and drives us apart, allowing us precisely to quantify our social standing, and to see that other people have more friends and followers than we do.

As Rhiannon Lucy Cosslett has brilliantly documented, girls and young women routinely alter the photos they post to make themselves look smoother and slimmer. Some phones, using their beauty settings, do it for you without asking; now you can become your own thinspiration. Welcome to the post-Hobbesian dystopia: a war of everyone against themselves.

Is it any wonder, in these lonely inner worlds, in which touching has been replaced by retouching, that young women are drowning in mental distress? A recent survey in England suggests that one in four women between 16 and 24 have harmed themselves, and one in eight now suffer from post-traumatic stress disorder. Anxiety, depression, phobias or obsessive compulsive disorder affect 26% of women in this age group. This is what a public health crisis looks like.

If social rupture is not treated as seriously as broken limbs, it is because we cannot see it. But neuroscientists can. A series of fascinating papers suggest that social pain and physical pain are processed by the same neural circuits. This might explain why, in many languages, it is hard to describe the impact of breaking social bonds without the words we use to denote physical pain and injury. In both humans and other social mammals, social contact reduces physical pain. This is why we hug our children when they hurt themselves: affection is a powerful analgesic. Opioids relieve both physical agony and the distress of separation. Perhaps this explains the link between social isolation and drug addiction.

Experiments summarised in the journal Physiology & Behaviour last month suggest that, given a choice of physical pain or isolation, social mammals will choose the former. Capuchin monkeys starved of both food and contact for 22 hours will rejoin their companions before eating. Children who experience emotional neglect, according to some findings, suffer worse mental health consequences than children suffering both emotional neglect and physical abuse: hideous as it is, violence involves attention and contact. Self-harm is often used as an attempt to alleviate distress: another indication that physical pain is not as bad as emotional pain. As the prison system knows only too well, one of the most effective forms of torture is solitary confinement.

It is not hard to see what the evolutionary reasons for social pain might be. Survival among social mammals is greatly enhanced when they are strongly bonded with the rest of the pack. It is the isolated and marginalised animals that are most likely to be picked off by predators, or to starve. Just as physical pain protects us from physical injury, emotional pain protects us from social injury. It drives us to reconnect. But many people find this almost impossible.

Its unsurprising that social isolation is strongly associated with depression, suicide, anxiety, insomnia, fear and the perception of threat. Its more surprising to discover the range of physical illnesses it causes or exacerbates. Dementia, high blood pressure, heart disease, strokes, lowered resistance to viruses, even accidents are more common among chronically lonely people. Loneliness has a comparable impact on physical health to smoking 15 cigarettes a day: it appears to raise the risk of early death by 26%. This is partly because it enhances production of the stress hormone cortisol, which suppresses the immune system.

Studies in both animals and humans suggest a reason for comfort eating: isolation reduces impulse control, leading to obesity. As those at the bottom of the socioeconomic ladder are the most likely to suffer from loneliness, might this provide one of the explanations for the strong link between low economic status and obesity?

Anyone can see that something far more important than most of the issues we fret about has gone wrong. So why are we engaging in this world-eating, self-consuming frenzy of environmental destruction and social dislocation, if all it produces is unbearable pain? Should this question not burn the lips of everyone in public life?

There are some wonderful charities doing what they can to fight this tide, some of which I am going to be working with as part of my loneliness project. But for every person they reach, several others are swept past.

This does not require a policy response. It requires something much bigger: the reappraisal of an entire worldview. Of all the fantasies human beings entertain, the idea that we can go it alone is the most absurd and perhaps the most dangerous. We stand together or we fall apart.