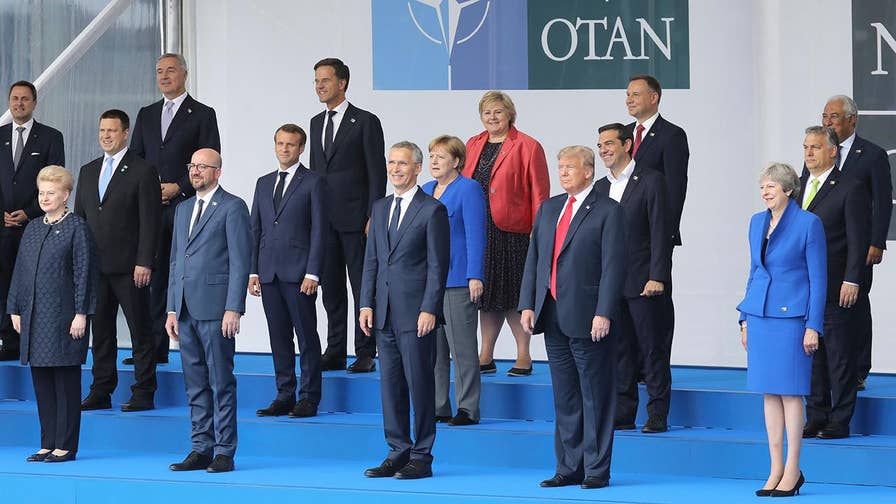 Fox News contributor Karl Rove discusses why President Trump was right to ask members of NATO to increase their defense spending to 4 %.

NATO leaders are spending the second day of the summit moving on from President Donald Trump’s harsh criticism on Wednesday for not meeting military spending obligations and focus instead on ending the war in Afghanistan.

Trump spent the first day of the summit to highlight the problems of over half of NATO members not gratifying the goal of spending 2 percent of their gross domestic products on defense.

Shortly after criticism, NATO leaders promised their “unwavering commitment” to increase defense spending, signing a declaration the states they are “committed to improving the balance of sharing the costs and responsibilities of alliance membership.”

What good is NATO if Germany is paying Russia billions of dollars for gas and energy? Why are there only 5 out of 29 countries that have met their commitment? The U.S. is paying for Europe’s protection, then loses billions on Trade. Must pay 2% of GDP IMMEDIATELY , not by 2025.

“We will be deploying an additional 440 personnel to NATO’s Resolute Support mission in Afghanistan and I think that indicates when NATO calls, the UK is one of the first to step up, ” May told reporters.

NATO seeks to come up with a commitment to fund Afghan security forces until 2024, a scheme that’s hard to sell given the reluctance of Western countries to continue being engaged in the never-ending conflict.

U.S. officials told Reuters that the White House is preparing another review of strategy in Afghanistan, only a year after Trump hesitantly widened the involvement in America’s longest war.

NATO leaders are also expected to discuss the alliance’s ties to Georgia and Ukraine, two countries that once were prospect members of the organization, but later faced aggressivenes from Russia that effectively blocked their entry as NATO rules prohibit countries with territorial conflicts joining the alliance.