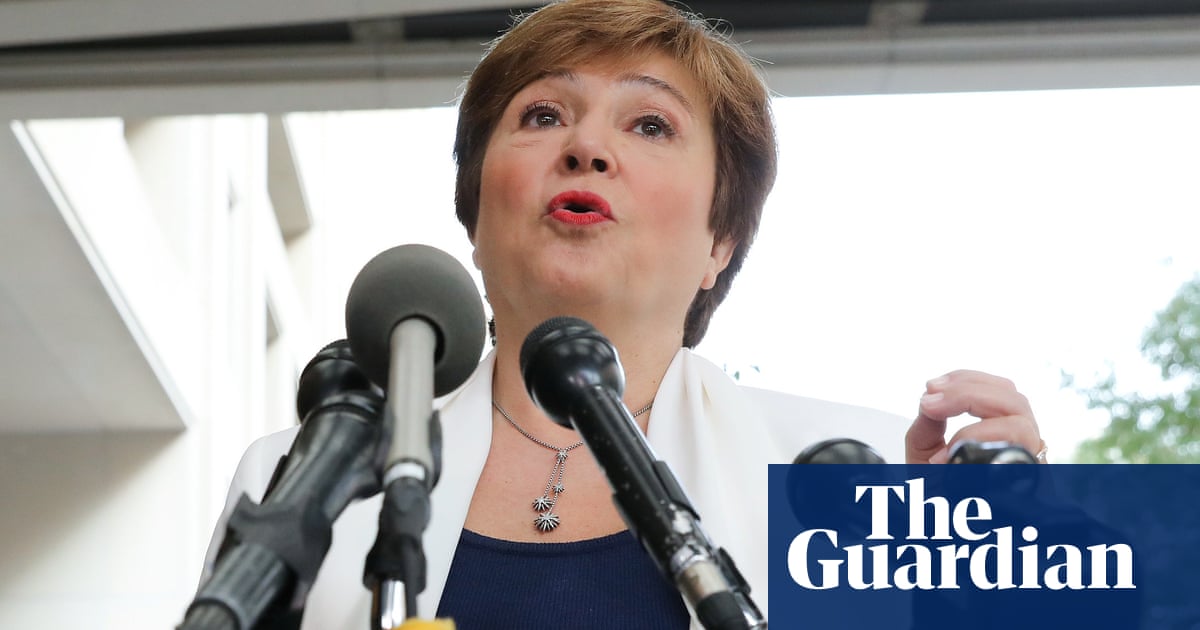 The new head of the International Monetary Fund has told squabbling nations to forget their differences and prepare a united response to the most serious threat to the global economy since the financial crisis a decade ago.

In her first speech since becoming the IMF’s managing director, Kristalina Georgieva said the world was in a synchronised slowdown and needed a synchronised response.

Speaking ahead of the IMF’s annual meeting in Washington next week, Georgieva said her organisation’s economists were expecting slower growth in nearly 90% of the global economy this year. “While the need for international cooperation is going up, the will to engage is going down.”

She said the use of low interest rates by central banks in an attempt to boost activity had led to a buildup of corporate debt and that there would be a risk of a $19tn (£15.5tn) default in the event of a major economic downturn.

“The global economy is now in a synchronised slowdown,” Georgieva said. “This widespread deceleration means that growth this year will fall to its lowest rate since the beginning of the decade. Next week we will release our world economic outlook which will show downward revisions for 2019 and 2020.”

The IMF has become steadily more pessimistic about the health of the global economy since 2017, when it was confident that a sustained and synchronised recovery from the financial crisis was at last under way.

Georgieva said the outlook had darkened owing to a series of “fractures” – trade disputes, geopolitical tensions and Brexit among them. Tackling climate change, terrorism and money laundering all required cooperation, she said.

Amid reports that talks between the US and China to end their tit-for-tat protectionist battle were going badly, the IMF managing director said global trade had come to a near standstill.

“Everyone loses in a trade war. For the global economy, the cumulative effect of trade conflicts could mean a loss of around $700bn by 2020, or about 0.8% of GDP. As a reference, this is approximately the size of Switzerland’s entire economy.”

She added: “Uncertainty, driven by trade, but also by Brexit, and geopolitical tensions, is holding back economic potential. Even if growth picks up in 2020, the current rifts could lead to changes that last a generation: broken supply chains, siloed trade sectors, a ‘digital Berlin Wall’ that forces countries to choose between technology systems.”

Georgieva said low inflation and weak growth meant it was right for central banks to keep interest rates low, but stressed that borrowing costs were already near zero or negative in many advanced countries, leaving limited scope for further cuts.

“Prolonged low rates also come with negative side-effects and unintended consequences. Think of pension funds and life insurance companies that are taking on more risky investments to meet their return objectives,” she said.

“In some countries, firms are using low rates and building up debt to fund mergers and acquisitions instead of investing. Our new analysis shows that if a major downturn occurs, corporate debt at risk of default would rise to $19tn, or nearly 40% of the total debt in eight major economies. This is above the levels seen during the financial crisis. Low interest rates are also prompting investors to search for higher yields in emerging markets. This leaves many smaller economies exposed to a sudden reversal of capital flows.”

Georgieva said it was time for countries to use higher public spending and tax cuts as an alternative way of stimulating growth.

“Now is the time for countries with room in their budgets to deploy, or get ready to deploy, fiscal firepower. In fact, low interest rates may give some policymakers additional money to spend,” Georgieva said, singling out Germany, the Netherlands and South Korea as nations that could increase spending on infrastructure and research and development, which would boost economic activity.

But, she said, “that advice will not work everywhere. Globally, public debt is near record levels. So in countries with a high debt-to-GDP ratio, fiscal restraint continues to be warranted.”

The IMF will release its latest economic forecasts next week but Georgieva stressed a coordinated fiscal response could be needed if activity slowed more sharply than expected.