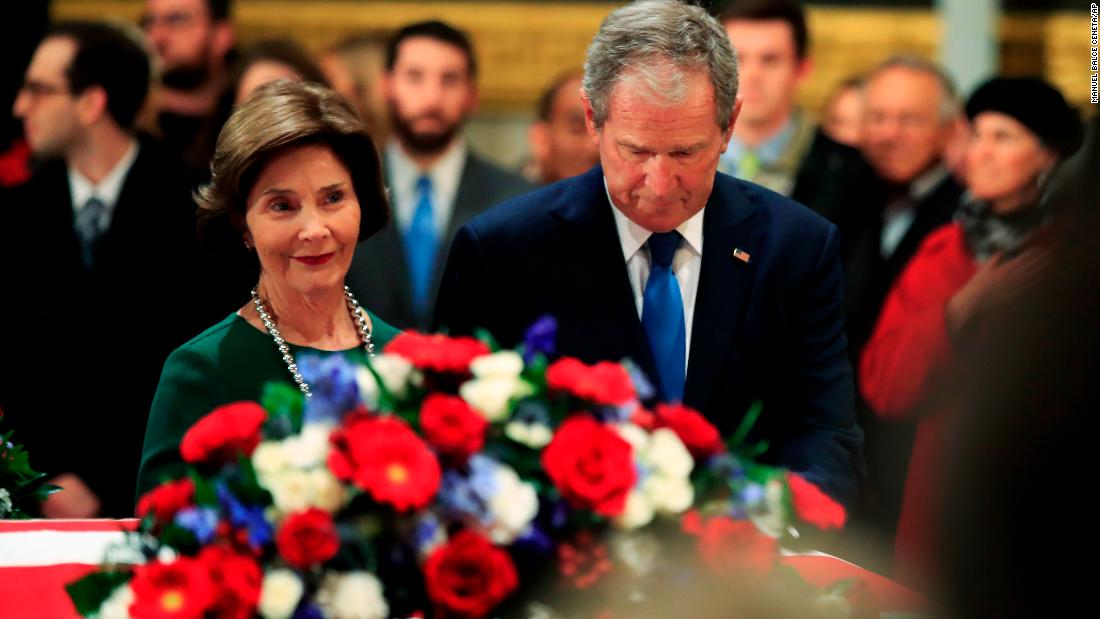 Washington (CNN)The hilltop cathedral in Washington filled Wednesday with recollections of George H.W. Bush as a modest but mighty president, a man whose characteristic humility was belied one final time with all the pageantry of a state funeral.

“To us,” the younger Bush said, “he was close to perfect.”
As Christian hymns echoed through the cathedral’s limestone arches, sung and played by military orchestras and choirs, there seemed to be more laughter than tears in the pews — a reflection of a long life lived in the company of good friends and family.
His eulogists each captured the successive roles Bush played in his lifetime: World War II flyboy, statesman, friend and father.
“He showed me what it means to be a president who serves with integrity, leads with courage and acts in love with his heart for the citizens of our country,” George W. Bush said, describing his father as a man who preferred steaks and vodka martinis over broccoli, speed-boated and skydived as an octogenarian, and who lived life at two settings: “full throttle and sleep.” 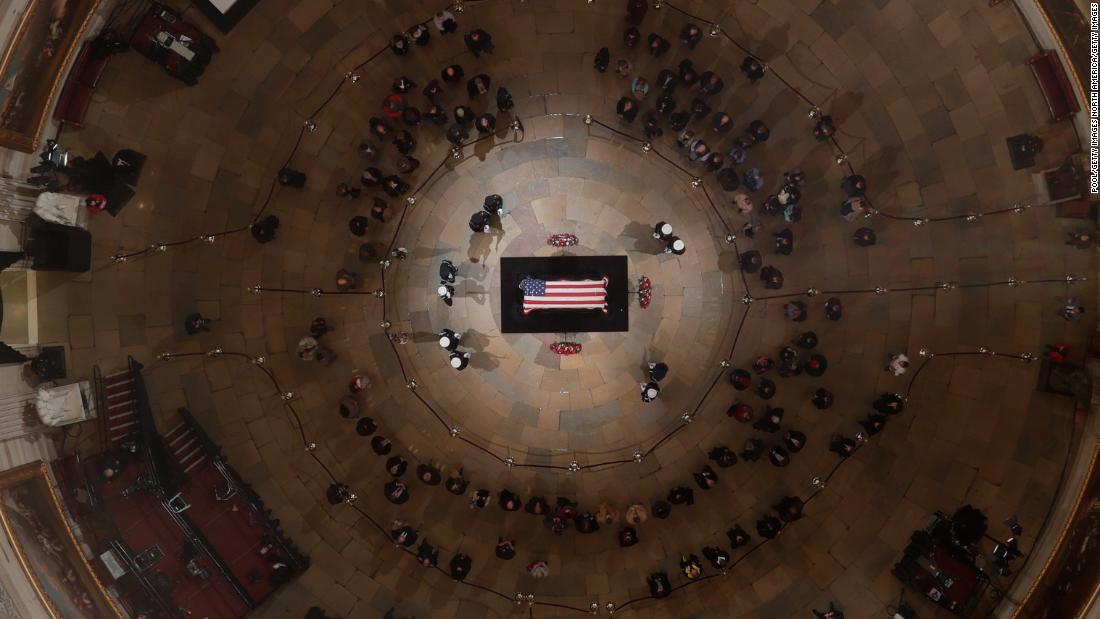 When the tears did come, it was when Bush was remembered as a family man who doted on the large brood who filled the first several rows of the sanctuary. George W. Bush, who as president was sometimes prone to an occasional cry, appeared to steel himself with deep breaths throughout the service before letting out a sob.
“He was the best father a son or daughter could have,” he said, his eyes welling up and his body quaking. When he concluded, the congregation burst into sustained applause.
He was one of the five living US commanders in chief at the event; Jimmy Carter, Bill Clinton, Barack Obama all attended along with President Donald Trump. It’s the first time all five men have convened face-to-face since Trump took office.
Bitter disputes between Trump and his predecessors have fractured the traditional presidents’ club. There was little warmth when Trump greeted only his direct predecessor Obama before taking his seat and looking directly ahead.
The younger Bush, seated with his family instead of with his fellow presidents, seemed to break the unease when he handed Michelle Obama a candy — the same gesture she extended to him in September at the funeral of Sen. John McCain.
Though the tributes delivered Wednesday focused squarely on the late president, the traits of the current one — sitting mostly stone-faced in the front row — made for a stark comparison.
“Those that travel the high road of humility in Washington are not bothered by heavy traffic,” said former Sen. Alan Simpson.
“To us, his was the brightest of 1,000 points of light,” George W. Bush said, using the same campaign motto Trump ridiculed several months ago during a speech.
For the last two days, Americans both powerful and ordinary have filed past Bush’s flag-draped casket in the Capitol Rotunda, paying their respects to a man who oversaw the end of the Cold War but who suffered defeat after one term.
To the strains of “Hail to the Chief,” the late president was carried from the Capitol and transported by hearse along streets lined with spectators braving bitter cold. He passed through a mostly shut-down city where he arrived first as a congressman and later served as a UN ambassador, CIA director, vice president and, finally, as commander in chief.
“He was our shield in danger’s hour,” Jon Meacham, the presidential historian, said in his eulogy. “An imperfect man, he left us a more perfect union.”
Like all presidents, Bush oversaw plans for his own funeral starting years ago, updating the details as time went on so the ceremony would reflect his druthers. The readings came from three granddaughters.
Unlike some of his predecessors, Bush told advisers he did not want his ceremony to drag on endlessly, mindful of attendees’ time. Ninety minutes were blocked off, though these events typically extend past the allotted span.
“He told me I only had 10 minutes. He was direct about it. It wasn’t even funny,” said Simpson, whose eulogy provided a healthy dose of comic relief.
In the crowd sat Jordan’s King, Britain’s Prince of Wales, Germany’s Chancellor and Poland’s President, a reflection of a foreign policy hailed as measured and based in core American values.
“Let me tell you — when George Herbert Walker Bush was President of the United States, every single head of government in the world knew that they were dealing with a gentleman — a genuine leader — one who was distinguished, resolute and brave,” said former Canadian Prime Minister Brian Mulroney.
After Irish tenor Ronan Tynan sang the final hymn, “Last full measure of devotion,” Bush’s casket departed back down the marble aisle, returning eventually to his adopted hometown of Houston on the military aircraft known as Air Force One when a sitting president is aboard.
He’ll be buried in his family plot at Texas A&M University in College Station on Thursday.