Hostility between Trump and Cruz on citizenship and conservatism dominated televised debate among many skirmishes on the NSA, Islamic State and more 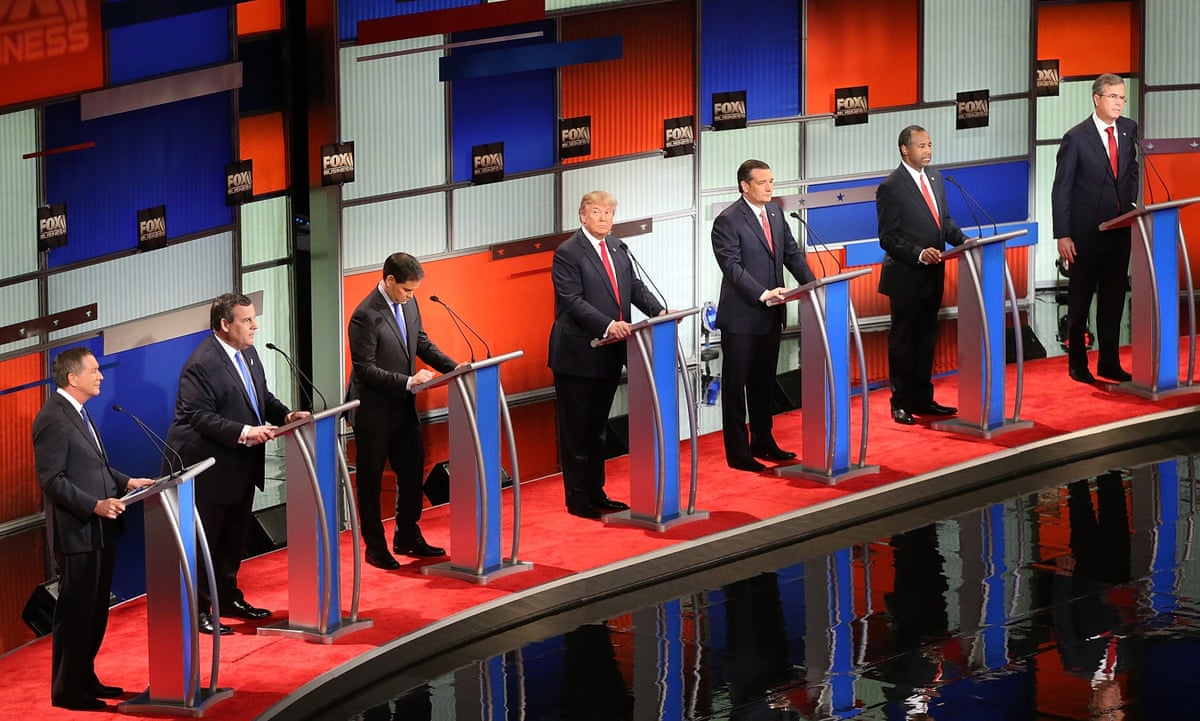 The race for the Republican presidential nomination erupted into open conflict between Donald Trump and Ted Cruz on Thursday night, with the partys two frontrunners launching blistering attacks over their values and eligibility for the nations highest office.

With just 18 days to go before the starting gun of the 2016 presidential election is fired at the Iowa caucuses, tensions that have been simmering beneath the surface exploded into plain sight.

And the rhetoric got hotter as candidates vied with one another to sound toughest on guns, fear of Muslims, immigration and American foreign policy. Liberal New York values were deplored by Cruz, while Florida senator Marco Rubio vowed to start sending more terrorist suspects to Guantánamo Bay.

However, a debate which lasted more than two-and-a-half-hours was dominated by Trump, the billionaire real-estate tycoon, and Cruz, the senator for Texas. After tip-toeing around each other for months as they compete for the ultra-conservative vote, they finally let their mutual disdain emerge at the sixth Republican debate in South Carolina.

As Trump and Cruz went after each other with new abandon, the North Charleston debate had the effect of appearing to further tighten the Republican contest. At the start of the debate, the number on stage had already been whittled down to seven the fewest yet following the relegation for lackluster poll ratings of Rand Paul, the libertarian senator for Kentucky, and former technology executive Carly Fiorina.

By the end of the debate, the pool of serious contenders appeared to have been reduced to just four the battling frontrunners Trump and Cruz, Florida senator Marco Rubio and Chris Christie, the governor of New Jersey.

The remaining three former Florida governor Jeb Bush, Ohio governor John Kasich and the once ascendant former neurosurgeon Ben Carson, spent much of the debate looking on from the sidelines.

The unofficial truce between Trump and Cruz, who are running essentially neck-and-neck in Iowa according to the latest local polls, was torn apart by the billowing spat over whether or not Cruz is a natural-born citizen and thus eligible to run for the presidency. Trump has been baiting Cruz in recent days, suggesting that doubts about the senators eligibility because he was born in Canada to an American mother and Cuban father could present the Democrats with a legal and electoral gift.

Under the television lights at the North Charleston Coliseum, where Trump yet again took pride of place in center stage and Cruz stood right beside him in recognition of his second-place ranking, the senator accused the billionaire of peddling extreme birther issues that only four months ago Trump himself had dismissed as immaterial. Since September the constitution hasnt changed, but the poll numbers have, and I recognize that Donald is dismayed that his poll numbers are falling in Iowa, Cruz said.

Cruz went on that under the most extreme birther theories, which suggest both parents of a president have to be born in America, interestingly enough Donald J Trump would be disqualified because Donalds mother was born in Scotland.

But I was born here. Big difference, Trump shot back.

Asked why he had raised the citizenship issue at this point in the race, Trump replied: Because now [Cruz] is doing a little better. I didnt care before, he never had a chance. Now he has a 4-5% chance.

Later in the debate, Trump and Cruz went at each others jugulars a second time on this occasion over Cruzs recent jibe that Trump subscribed to New York values. I think most people most people know what New York values are Not a lot of conservatives come out of Manhattan, Cruz said.

Trump, looking theatrically irate, hit back with a long dirge about how New York City had responded to the 9/11 attacks. The people of New York fought and fought and fought. We saw more death, even the smell of death, it was with us for months. Everyone in the world watched and everyone in the world loved New York. I have to tell you, that was a very insulting statement that Ted made.

The unrestrained fighting between the two frontrunners sucked much of the oxygen out of the debate, causing frustration among the others. At one point, Rubio blurted out: I hate to interrupt this episode of Court TV.

Rick Tyler, Cruzs national spokesman shied away from describing Cruz as attacking Trump. Instead, he thought the campaign had entered the contrast stage. They presented different points of view on different issues, he said of the spat between the candidates. Thats a contrast, I dont consider those attacks, if theres a difference on policy well point out difference on policy. When we get attacked on silly things like birther conspiracies, well respond.

The clash at the top of the Republican pile was echoed in harsh exchanges between two more contenders who are struggling with one another – Rubio and Christie. The Florida senator and New Jersey governor are banking on a strong finish in New Hampshire, which Christie has made a focus of his campaign, in the hope of being crowned the anyone-but-Trump alternative to the tycoon.

Rubio turned on Christie, attacking him for what he characterized as a liberal record in New Jersey. I like Chris Christie, said Rubio, but we cant afford to have a president of the United States that supports gun control.

The Florida senator then went on to attack Christie for donating to Planned Parenthood and for supporting the supreme court nomination of liberal judge Sonia Sotomayor. Christie insisted that someone has been whispering in ol Marcos ear to encourage him to make such untrue negative talks.

I didnt support Sonia Sotomayor. I never wrote a check to Planned Parenthood. Both of Christies statements are untrue. Christie said in 2009 of Sotomayor, I am confident that she is qualified for the position of Associate Justice of the US supreme court. Christie also said in 1994, I support Planned Parenthood privately with my personal contribution and said gun control was the issue that energized him to enter politics.

The New Jersey governor though went on to mourn the fact that Rubio attacked him. Two years ago, he called me the conservative reformer that New Jersey needed, said Christie Ive never changed my tune. Marco Rubio is a good guy and a smart guy.

The rising temperature of the nomination race as Iowa fast approaches prompted a tone of debate that was sharper, more shrill than in the previous five televised engagements. In particular, the candidates tried to out-do each other in attacking Obama and the Democratic frontrunner Hillary Clinton in ever more lurid terms.

Christie took the prize, calling Obama a petulant child and vowing that the Republicans would kick your rear end out of the White House from this fall.

Rubio also took a notably more aggressive posture than he had in previous debates dropping a more cerebral approach for caustic comments on Obama, Clinton and in regard to national security. He vowed if he were elected president to wage war against radical jihadist terrorists, saying if we capture any of them alive they are getting a one-way ticket to Guantánamo.

Yet again, Bush tried to take a shot at Trump after the frontrunner defended his call for an temporary ban on all Muslims entering the US. Bush argued that this policy is a policy that makes it impossible to fight Isis and noted the Kurds are our strongest allies, they are Muslims. In the former Florida governors view, Trumps rash statements sent signals of weakness to the rest of the world.

Kasich sounded a more conciliatory tone on the issue of police shootings. The governor of a state that saw Black Lives Matter protests in the aftermath of the shooting death of Tamir Rice, said protest is fine but violence is wrong and insisted the country needs to be healed.

A further brutal exchange broke out late into the debate between Cruz and Rubio, whose similarities both sons of Cuban fathers, both senators cannot disguise their mutual hostility. Rubio hit Cruz on surveillance and his support of the USA Freedom Act by alleging the Texas senator acted in concert with Democratic presidential hopeful Bernie Sanders and libertarian Republican Rand Paul on the floor of the Senate.

In contrast, Rubio maintained his national security bona fides insisting: Edward Snowden is a traitor and if I am president and we get our hands on him, he is standing trial for treason.

South Carolina congressman Trey Gowdy, a prominent Rubio supporter, thought the attack on Cruz was fair game for the Florida senator. I think contrast is good if its done in context and its fair, said Gowdy. If you present yourself as being pure without any deviations, it is fair to have episodes of, shall we say non-compliance, pointed out to people in what was a barely disguised slam at Cruz.

Carson, briefly a frontrunner, seemed flummoxed throughout the debate, and was a nonfactor. The retired neurosurgeons campaign has been beset by high staff turnover and accusations of financial irregularities. Much of the money the campaign has raised has gone to direct mail vendors. After the debate, when asked by the Guardian if his campaign was a direct mail scam, Carson said: Not that I know of.

In the undercard debate earlier on Thursday evening, Fiorina, former senator Rick Santorum from Pennsylvania, and the former Arkansas governor Mike Huckabee also targeted their fire primarily on Hillary Clinton. In one of the more memorable lines from the hour-long discussion, Fiorina said: Unlike another woman in this race, I actually love spending time with my husband.

Rand Paul had decided to boycott the early debate in protest at being ejected from the main primetime event. But he was represented in that main debate, after all, when a group of hecklers briefly interrupted proceedings with shouts of: We want Rand! We want Rand!

At the end of the debate, Hillary Clinton made clear her view of the event in a tweet: 2 1/2 hours of this? Imagine 4 years.