Senior figures in both countries behave as if they are above the law. Enough is enough 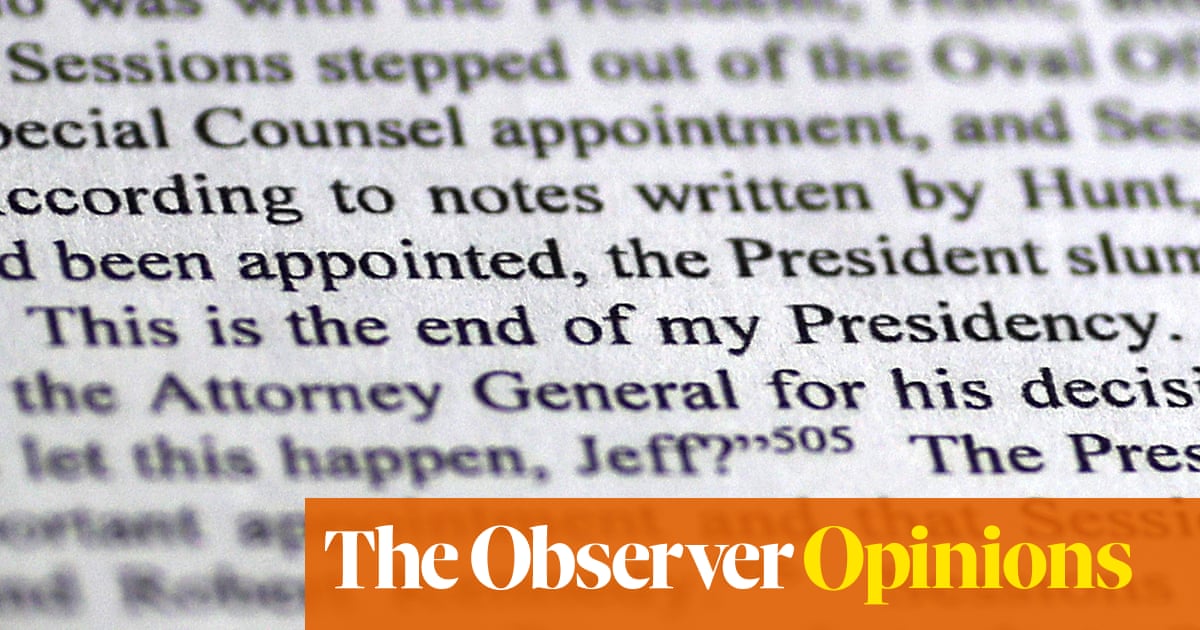 Trump was right. His presidency was “fucked” the moment the investigation into Russian involvement in the 2016 US presidential election, led by special counsel Robert Mueller, was announced.

It’s tantamount to treasonous to work so closely with the Russian secret services during the campaign, with the Russians plainly hoping a Trump presidency would turn a blind eye to the partition of Ukraine in return. It was tawdry, deploying the promise of pardons, to instruct his aides to “stay strong” in giving their account of what took place. The whole affair stinks – as does the Trump presidency.

Now the report is out – confirming that the Russian government interfered in the election in a “sweeping and systematic fashion”, an interference in which Trump connived and over which he lied – Democrats have no option but to launch a preliminary impeachment inquiry. This could and should lead to full impeachment. The subpoena by the House judicial committee for the full unredacted report is the first step.

Democrat leaders may have misgivings about how impeachment will play out politically, but they have a constitutional and moral obligation to act against such a president with such a record. This behaviour sets new abysmal lows. Republican senators will almost certainly block the two-thirds majority needed to secure impeachment in the Senate – but 14 of them voted for Bill Clinton’s impeachment in 1998. They will have some work explaining why Clinton’s alleged misdemeanours were so much worse than Trump’s. He never acted so brazenly, so criminally or connived with a foreign government.

The Mueller report also raises crucial questions for Britain. A key aim of Russian foreign policy is to break up the western alliance – of which a fundamental building block is the European Union. Securing Brexit was a pivotal Russian objective, as has been acknowledged by a former head of the Russian secret service. How much was Russia’s Internet Research Agency – which hacked the Democrat party and Hillary Clinton’s emails – and its secret service (GRU) involved in interference during the British referendum?

While we’re at it, where did Leave.EU, the Farage/Banks wing of the Brexit operation, get its funding? Who funds the Brexit party today? What are their links with foreign governments? Why has no official inquiry been launched to match Mueller’s in the US?

For all my commenting career, the liberal left in both Britain and the US – even when in power – has been on the intellectual and cultural defensive. The point of the libertarian, free-market revolution was to undermine on first principles any arguments about promoting economic and social betterment by using public power. But what has made a tendentious argument so successful is that it has been promoted by self-styled patriots, those at the top of the social pile and those who are seen subliminally as our natural governors.

I recall Neil Kinnock saying that as Labour leader he always felt that he was challenging a Conservative party that was the “natural” incumbent – Labour somehow were the permanent outsiders whose grip on power would always be temporary. Libertarian economics backed by social prestige – and the entitlement of the right to assume that what they say is necessarily indisputable – has been a powerful combination.

It is at work again over the Mueller report and Brexit. William Barr, Trump’s attorney general, is not a fool, but he has allowed his reputation to be forever tarnished by trying to pretend in the hours before the report was released that it entirely exonerated the president. He should be a good enough lawyer to know that Mueller differentiated between conspiracy, which is illegal, and hard-to-define collusion, which is not, and that, in any case, Mueller did not believe his brief extended to the profoundly political act of indicting a sitting president. That task, complete with the damning information he had uncovered, he would necessarily hand to Congress.