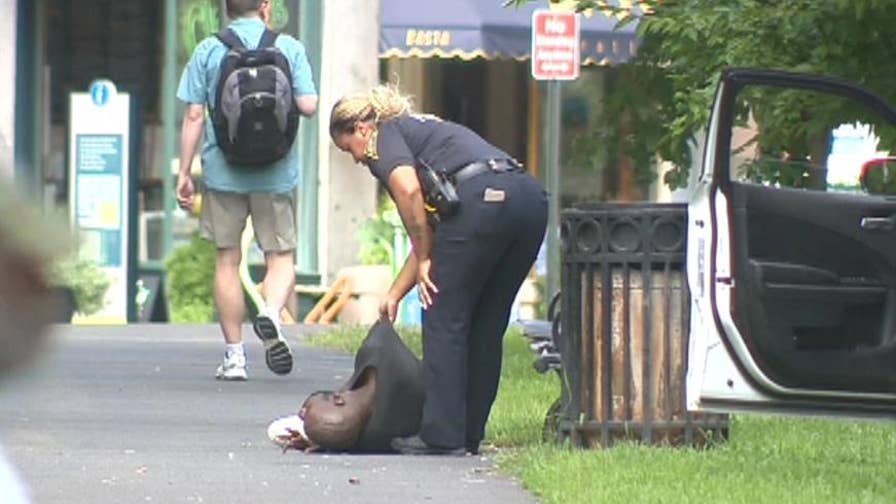 Crews respond after more than 30 people overdosed on what is believed to have been synthetic marijuana.

As many as 76 people overdosed on what’s believed to have been synthetic marijuana at or near a Connecticut city park as fellow parkgoers watched in horror.

Officials said most of the overdoses happened on the New Haven Green throughout the day on Wednesday.

“We have a guy laid out in the alleyway, unresponsive, eyes wide open. He’s out cold,” an unidentified bystander shouted, according to the New Haven Register.

The total # of overdoses stands at 76. At 10p, it was at 71. So those five overdoses took place outside of the Green, according to police. First responders are still at the Green in case more overdoses happen. pic.twitter.com/1VgVOStcbE

Lt. Ernest Jones, an emergency medical technician for the New Haven Fire Department, told the Register he’s had his job for five years, and never had such an abnormal day at work.

“This was a particularly odd, rare occasion where (there was) call after call for man down, obviously with symptoms of some kind of overdose, and at the time of getting that patient packaged and transported to the hospital, we’d see another immediately fall down, right there,” Jones said. “At that point, we’d go help that patient, and while helping that patient, another person went down. So it became a domino effect.”

Naloxone, an antidote for narcotic overdoses, was administered to some victims but didn’t appear to be effective.

New Haven police chase down a man who appeared to be overdosing after he refused treatment from a medic @NBCConnecticut #NBCCT pic.twitter.com/XHTo7YUbbA

“Do not come down to the Green and purchase this K2,” city Police Chief Anthony Campbell said. “It is taking people out very quickly, people having respiratory failure. Don’t put your life in harm.”

The Green, which attracts homeless people and drug users throughout the year, as The New York Post reported, is located in downtown New Haven to the south and west of the Ivy League Yale University.

On average, two people die of a drug overdose every day in Connecticut. The state has surpassed the national death rate for drug and opioid overdoses since 2013.

“People are self-medicating for several different reasons and every agency — police, fire, medical, hospitals — all are strained at this time. This is a problem that’s not going away,” New Haven Fire Chief John Alston Jr. said, according to WVIT.

A very chaotic day in New Haven – the number of overdoses keep rising by the second. All I keep hearing are sirens everywhere – we witnessed two more just now pic.twitter.com/hA7KSO6vaB

Police said they arrested 37-year-old Felix Melendez, who was out on parole prior to his arrest, according to the Register; he’s believed to be connected to at least some of the overdoses in the park.

Synthetic marijuana, which generally is plant material sprayed with chemicals that mimic the high from real marijuana, has been blamed for overdoses across the country.

Authorities suspect synthetic cannabinoids, known as K2, were laced with other substances in the New Haven cases, ABC News reported.

K2 can result in seizures, psychosis and even death.

Officials were testing the blood of the victims to see exactly what they ingested.

The overdoses follow a similar outbreak at the same park on July 4, when more than a dozen people were treated.

Frank Miles is a reporter and editor covering sports, tech, military and geopolitics for FoxNews.com. He can be reached at Frank.Miles@foxnews.com.