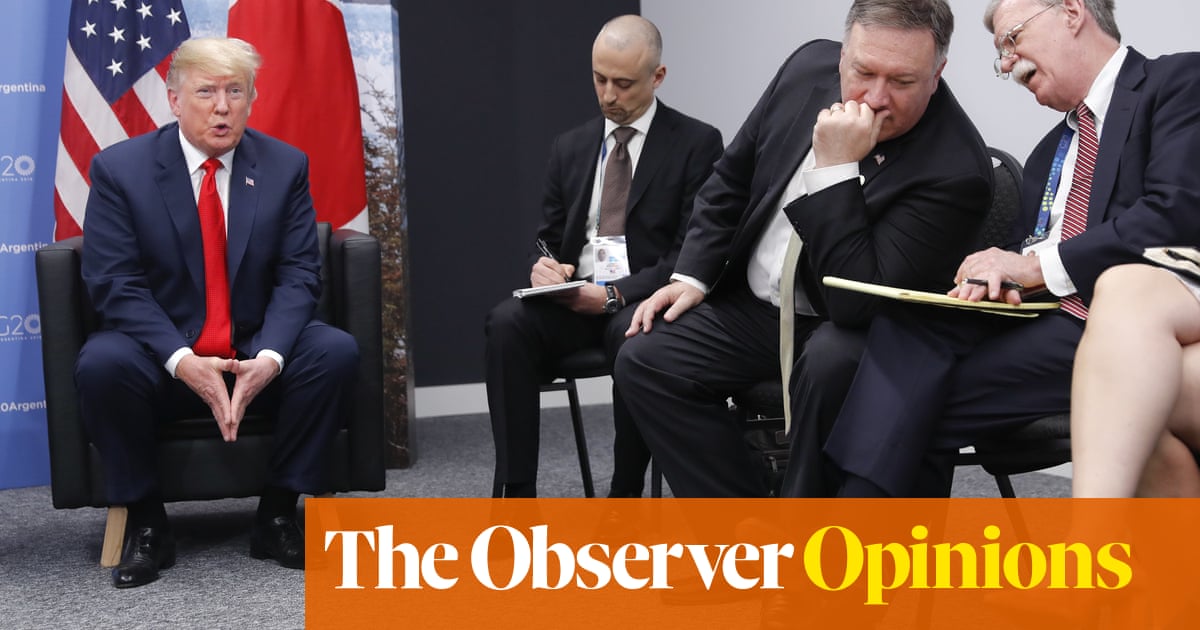 American secretaries of state can be earnestly dull, like John Kerry, or plain brilliant, like George Marshall; they can be Machiavellian, like Henry Kissinger, or intensely political, like Hillary Clinton. Mike Pompeo, the bluntly spoken, present-day incumbent who will discuss “shared global priorities” with Theresa May in London, is simply a problem.

As last week’s failed US pressure tactics in Venezuela showed, the former army officer, Christian evangelical and ex-CIA director favours a muscular approach to diplomacy. His messianic drive to force regime change in Iran is another example. He recently suggested Donald Trump had been sent by God to save Israel from Tehran’s mullahs.

Speaking in Cairo in January, Pompeo celebrated US support for dictators such as Egypt’s Abdel Fatah al-Sisi and the Saudis’ war in Yemen. Next month, he will help unveil a peace plan that could destroy any lingering Palestinian hopes of an independent state. But he makes no apologies. “I’ll put it bluntly,” he declared. “America is a force for good in the Middle East.”

The difficulty for May and UK foreign secretary Jeremy Hunt is that this hawkish stance contradicts long-held British policies and principles. Since Pompeo took office last year, the US has scuppered the Iran nuclear deal, terminated a landmark missile reduction pact with Russia and withdrawn from the 2013 global arms trade treaty – all of which Britain supports.

Pompeo’s state department continues to obstruct effective action on climate change. According to him, UN peacekeeping is a corrupt racket. And his diplomats recently watered down a UN resolution on combating rape as a weapon of war, to appease the anti-abortion lobby. On these and other issues, Pompeo acts as bagman for Trump. But he evidently believes it all, too.

His degree of ignorance on Europe is startling. A Pompeo speech in Brussels last year, billed as a major policy statement, was mostly a regurgitation of the prejudices, half-truths and stereotypes beloved of rightwingers and Eurosceptics. With a straight face, he announced a new Trump-led “liberal international order” – then went on to trash the EU, the UN and multilateral cooperation in general.

What Pompeo, echoing his master’s voice, was doing was reasserting the unfettered power of “sovereign” states and leaders, championing narrow nationalist agendas and pursuing their interests unilaterally regardless of consequences. “Multilateralism has too often become viewed as an end unto itself,” he claimed, without saying who, if any one, saw it this way.

Post-1945 Europe had done well (with American help), he patronisingly conceded. But Brexit was a “political wake-up call,” he said. “Is the EU ensuring that the interests of countries and their citizens are placed before those of bureaucrats here in Brussels?” It was as if he was cribbing from an editorial in Paul Dacre’s Daily Mail.

The decision to invite Hungary’s much-ostracised nationalist leader Viktor Orban to meet Trump at the White House on the eve of this month’s critical EU parliamentary elections smacks of typical Pompeo-style contempt for European democracy.

Pompeo belongs to a cold war generation that, despite mounting evidence of relative US decline, clings to delusional myths of American exceptionalism and US hegemony. His row with Russia last week over its backing of Venezuela’s Nicolas Maduro was instructive. Pompeo cannot abide the kind of Russian influence-peddling in Washington’s “backyard” that the US routinely uses in Moscow’s.

In these anti-Russian fulminations he was noisily seconded by John Bolton, national security adviser and disinterred Iraq-era neo-conservative. This pair are Tweedledum and Tweedledee in Trump’s remake of Alice Through the Looking Glass – a nightmarish return to the dark days of spheres of influence, proxy wars, bought-and-paid-for dictators, covert ops, disinformation and prim American righteousness. “This is our hemisphere!” Bolton exclaimed last week, as the Venezuelan revolt flopped. Really? Have these people learned nothing?

This regression is not a blip. Pompeo and Bolton are now running US foreign policy. The “grown-ups”, such as ex-defence secretary Jim Mattis, have resigned or been fired. Trump’s attention span is notoriously short. He is anyway preoccupied with his 2020 re-election bid. And on Russia, however he spins the Mueller report, he is compromised. So there’s a policy and leadership vacuum. And Pompeo and Bolton, fervent ideologues-in-arms, are filling it.

If there has been a less impressive, more dangerous US secretary of state, it is hard to name one. Pompeo’s reactionary views challenge almost everything modern Britain stands for. Yet this is the man who will meet May this week to discuss “shared priorities”. Given Pompeo’s confrontational, blinkered America First agenda, May could struggle to find any common ground at all.

She will doubtless put a brave face on it, but it will be tricky. Pompeo plans to warn May against doing business with the Chinese 5G firm Huawei. He could also seek to enlist British support in resisting Chinese and Russian military and economic encroachments in the Arctic region – an issue of growing concern in Washington. For this reason, Pompeo will visit Finland and Greenland, too.

Trump’s state visit next month will also feature in the talks. Pompeo wants the lavish reception Trump thinks he deserves – and will not be above dangling some post-Brexit trade carrots. What can May do? Through multiple miscalculations, she has placed Britain in thrall to these hard-faced Washington bully boys who think they run the world. Smiles on the No 10 doorstep cannot hide the angst within.