How is it possible to live so long, and accrue so little weather wisdom, asks Guardian columnist Zoe Williams. And why do you feel compelled to reminisce about the summer of 1976, although you dont actually remember it? 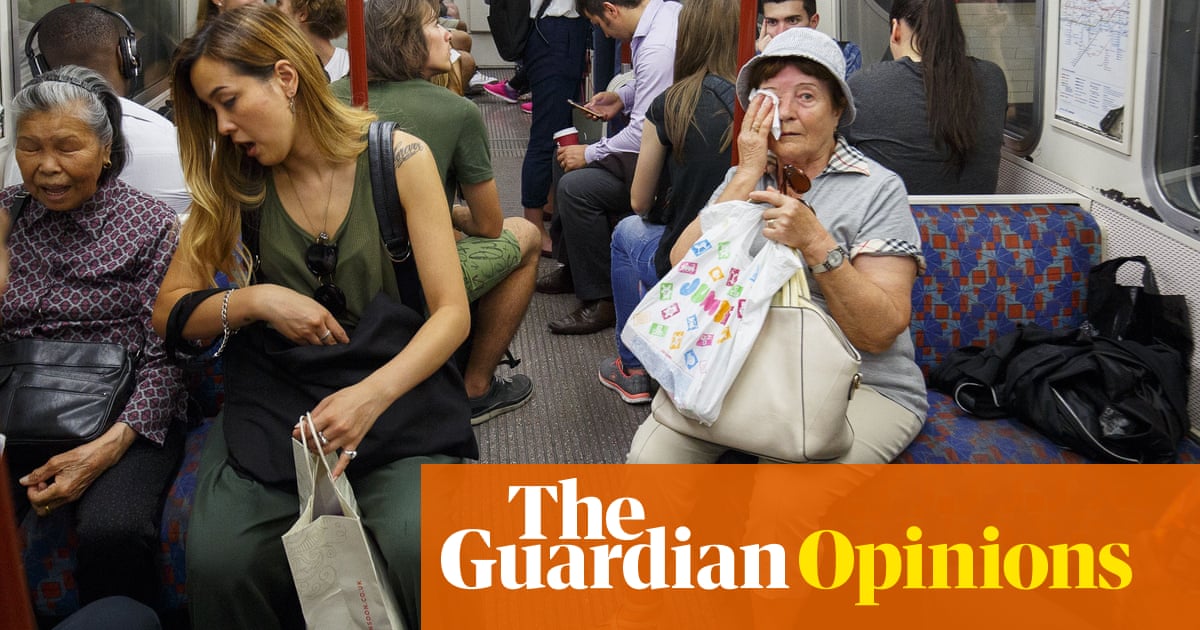 This is a complete and unabridged account of the experience of being middle-aged in a heatwave, which you wouldn’t wish upon a dog. Some build-up of brain bacteria over time compels you to mention climate change whenever there is any weather anywhere, but you remember from the 90s that everybody hates that person, so it’s better to just head off weather chat mildly, absent-mindedly – “Hot? I suppose it is” – and this gives you a bumbling, professorial air, as if you don’t notice the world because you’re busy thinking about Frankfurt School Marxists, except what you’re really thinking is: “I am way too hot.”

You can’t wear jeans because it’s like being stitched alive into your own nuclear-resistant shroud, which is the same for everyone except the difference is you don’t have anything but jeans. What happened to all your T-shirt dresses and chiffon? Surely you once owned shorts? For the love of God, even some clamdiggers would help. You must have had a ritualistic bonfire of the fripperies, not planning for this eventuality, even though some kind of summer, realistically, will happen every other year. How is it possible to live so long, and accrue so little basic weather wisdom?

You are compelled to reminisce about 1976, even though you don’t remember it any better than a millennial so you have to go on the internet and Google your own nostalgia. Did you know, by the way, that after two historically dry months, they appointed Denis Howell minister for drought, then three days later, thunderstorms arrived and it didn’t stop raining until Christmas? But before that, he tried to boost the national water-saving effort by inviting reporters to watch him taking a bath with his wife, and that’s the kind of politics – desperate, histrionic, obscurely sleazy, yet endowed with magical powers – that you don’t see twice in a lifetime, however hot it is.

Around about day four of any given heatwave, a certain seen-it-all-before ennui beds in, because wasn’t the year before last exactly like this, only more so? No, that was 2003. That incredibly recent year, when you stood on a tube platform reading about the temperature at which the cells of the human body start to change composition and can never change back, like scrambled egg? It was 15 years ago. That’s why you’re wearing a skirt in this memory, and reading “43C” on paper, not a screen.

You’re too young to be in anyone’s heat health news story, and too old to take it as an invitation to drink all day. You have too many pets who are, themselves, too hot. You are just shy of the sun-cream native generation, so it’s a huge mental effort to remember it and you don’t like the smell. If you’re a man, the sun has blazed through your cycle helmet and you have stripes of tan on your bald pate, like a badger. If you’re a woman, you wake up every morning thinking, is this a hot flush? Then you remember, no, it’s just hot, and then you wonder why your memory is so bad, realising that is the other harbinger, and you’re locked in a cycle of “menopause-or-not?” that lasts roughly the entire day. Young people probably don’t know why their boss is in such a bad mood, but you do: it’s because they’re slightly dehydrated and their gout is flaring up. You worry about your garden, but never quite enough to take measures to make sure nothing dies. You do not want to paddle, and ice-cream does nothing for you. And then, when it’s over, all you can remember is how much you loved it.

The best thing about Danny Dyer’s Brexit analysis last week was that he called David Cameron a twat on primetime telly; the second best thing was that he said it twice; and the third best thing was that he pronounced it with two syllables (ter-WAT), which, in the way of something truly inimitable, I can’t stop trying to imitate. But he crammed another gobbet of genius into 30 seconds, when he said the whole business was like a mad riddle.