If Donald Trump were to enact his threats to build a border wall, rip up Nafta and block remittances the effect on the countrys economy would be devastating 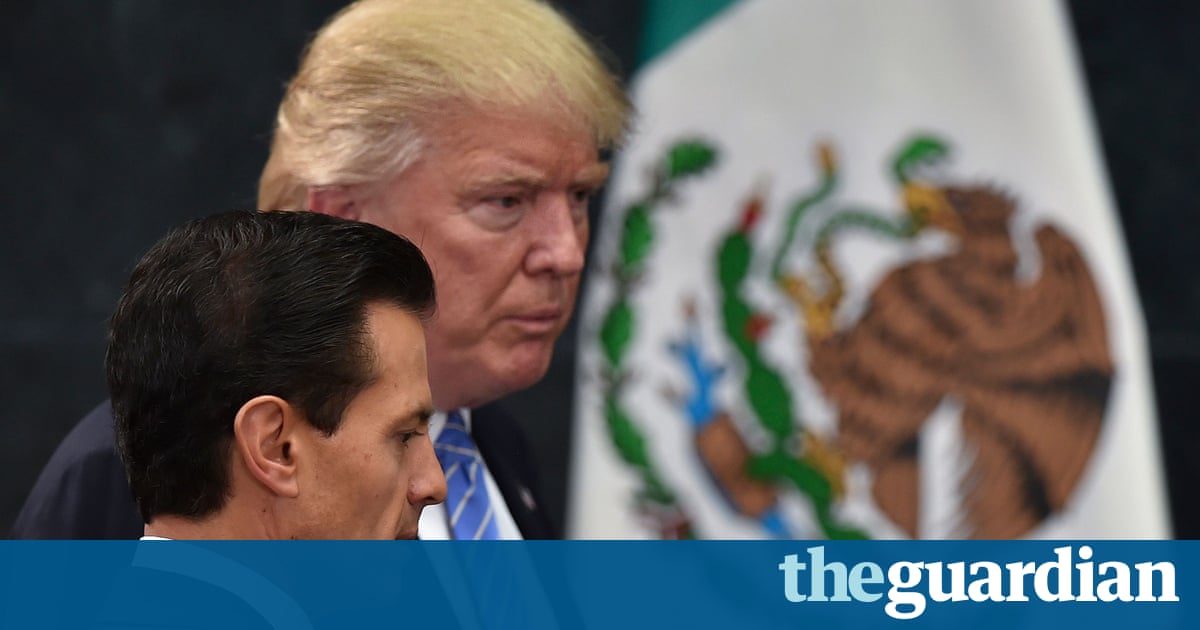 According to Donald Trump, Mexicos leaders are smart, sharp and cunning. His election gives them a chance to prove it.

The Republican is not yet in the White House and already a sense of crisis envelopes Mexico. If Trump follows through on campaign promises he could shred Mexicos economy, stability and dignity. Will its leaders rise to the challenge?

Mexico, like the rest of the world, must wait to see what President Trump does in office. But this nation of 122 million people has special reason for dread.

In addition to branding Mexican immigrants rapists and criminals, candidate Trump made specific threats that would humiliate and bankrupt the USs southern neighbour.

The top three: seal it off with a 2,000-mile wall and make it pick up the tab; rip up the North American Free Trade Agreement (Nafta); intercept remittances that sustain millions of families. Any one of those events would be a disaster all three, a catastrophe.

The export sector is completely dependent on the US market and Trump knows it, said Ernesto Carmona, of the University of the Incarnate Word, a Texas business university with campuses in Mexico. If he closes the door to Mexican exports, it will bankrupt the economy.

Mexicos central bank raised interest rates last week to try to shore up the countrys currency, the peso, which has plunged since 8 November. The Banco de Mxico warned that the global outlook had become more complex.

Mexicans might be reassured to know their government is much smarter, much sharper, much more cunning than US leaders except that it was Trump who said this. It was an outsiders jibe against the supposed Washington beltway dummies being outwitted by Mexicos machiavellian masterminds.

Whether they are that smart or whether Trump is as smart as he claims remains to be seen.

In Nogales, an industrial city bordering Arizona, residents have found wry solace in the notion that the former reality TV star may be dumber than Enrique Pea Nieto, a president not famed as cerebral. You have to laugh, right? said Audn Salazar, a taxi driver.

Its been joke after joke after joke, said Alma Cota de Yez, who runs Fundacin del Empresariado Sonorense, a civil society group. Not that the situations funny. Were stunned.

The mood in Los Pinos, Mexicos version of the White House, is reportedly sombre, not panicky. But there is little sense of a strategic plan to deal with Trumpism.

Few governments, if any, possess one. The casino owner-turned-insurgent populist, after all, had been expected to lose to Hillary Clinton. Plus he has diluted some campaign pledges, leaving his intentions murky.

Mexicos leaders can only guess if it will be business as usual, a Trumpocalypse, or somewhere in between.

1 The peso. It has rallied slightly but remains volatile and weak the most liquid currency of the emerging countries. Inflation remains relatively stable and there have been no drastic price hikes.

So far the markets are responding to expectations and speculations rather than actual declines in exports or investment flows, said Jaime Serra Puche, a former business minister and Mexicos chief Nafta negotiator.

The government is right to let the market adjust rather than entering into a pissing contest of buying and selling dollars, otherwise youre dead. If we start to see structural changes, then theyll have to rethink the issue.

2 Trade. Since Nafta took effect in 1996, the value of exports to the US has jumped sixfold to $320bn last year. Annual trade between the two neighbours is worth more than half a trillion dollars, equalling $11.2bn every week.

If Trump renounces Nafta, trade would in theory revert to pre-existing World Trade Organisation (WTO) tariffs, which are less than 3% for Mexican products but higher for US exports. But Trump has also pledged to slap taxes as high as 35% on Mexican imports, violating WTO rules and throwing Mexico into uncharted territory.

The finance minister, Ildefonso Guajardo, has said Mexico will try to persuade the new US leader that Nafta benefits all North America and makes it globally competitive. No date has yet been set for talks but Pea Nieto has floated a meeting with Trump before his 20 January inauguration.

3 Remittances. The $24.8bn Mexican emigrants sent home last year overtook oil revenues for the first time as a source of foreign income. Most was sent by Mexicans in the US a lifeline for rural families which Trump has threatened to cut or curb. Any restriction to this income would affect the countrys poorest families, said Serra. A dramatic restriction could, ironically, spur migration to the US, which has been steadily falling in recent years amid better economic prospects at home.

4 Migration. The record numbers fleeing Honduras, Guatemala and El Salvador which are suffering from war-zone levels of violence present acute humanitarian and logistical challenges for Mexico, which is under pressure from Washington to stem the flow.