The first lady is jetting off to promote her Be Best child welfare initiative, but there is no word on whether it promotes locking them in cages or allowing them to get shot 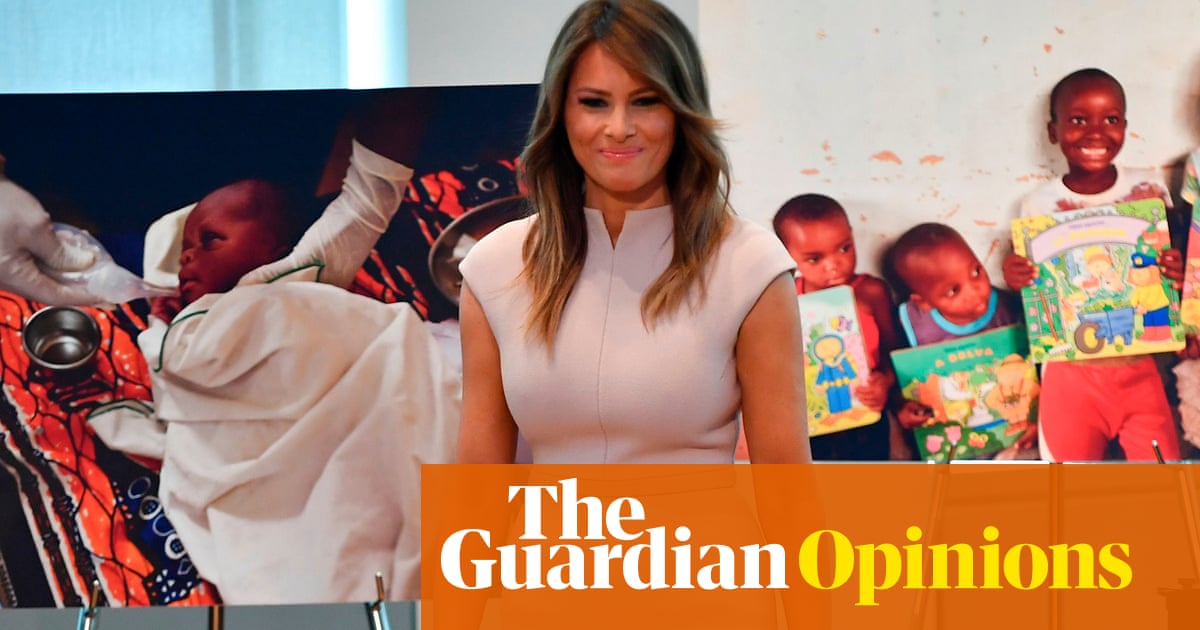 Melania Trump has packed her bags and is heading far, far away from her husband. On Monday, the first lady is jetting off on a solo tour of parts of Africa; her first major international trip without the president. She is planning to visit Ghana, Malawi, Kenya and Egypt in order to promote her “Be Best” child welfare initiative. Months after it was first announced, it is still not entirely clear what the objectives of Be Best are, but Melania isn’t letting that stop her from spreading the grammatically incorrect gospel.

At this point, the cynical reader may be grumbling: “I really don’t care about Melania’s travel plans, do you?” Well, I do. It is truly laudable that the first lady is taking time out from ignoring all the chaos in the White House to get on a private jet and pose for photos with smiling African children. We should all be so selfless.

Of course, Melania is going to do a lot more than just posing. The US has much to teach the rest of the world about child welfare, you see, and I’m sure she’ll be passing on valuable advice. Such as: don’t try and seek asylum in the US unless you want to be separated from your parents, drugged and locked in a cage.

The US also has important lessons to pass on about the value of education. This year, for example, a federal district court judge in Michigan ruled that “access to literacy” or a “minimally adequate education” was not a fundamental right. The judge used this decision to dismiss a class-action lawsuit filed by students at underperforming schools in Detroit, who argued that they had been denied access to literacy because of underfunding and mismanagement. According to the complaint, the schools lacked textbooks but were filled with vermin; the first thing teachers did each morning was clean up rodent faeces. Who says the American dream is dead, eh?

Another thing the US excels at, of course, is school shootings. There have been 36 shootings in schools or college campuses this year alone. But rather than implementing common-sense gun control, the US has simply shrugged and decided that active shooter drills are just going to be the new normal in American schools. Which is good news for bulletproof-backpack manufacturers; sales have soared since February’s Parkland school shooting, in which 17 people were killed.

It’s not such good news for the kids. According to a report by the Giffords Law Center to Prevent Gun Violence, an activist group, nearly 60% of American high school students say they are afraid of gun violence occurring at their school or community. I’m not sure how many kids in Ghana, Malawi, Kenya or Egypt live in fear of getting shot in their maths class. Perhaps Melania can find out.

It looks like Melania will be doing a lot of flying, so I hope she has packed enough reading material. She might want to start with the UN convention on the rights of the child, the landmark agreement that established global standards to protect children. The US is currently the only country in the world that hasn’t ratified the treaty. It used to share this dubious distinction with South Sudan and Somalia, but they both ratified it in 2015. You would think that the US’s failure to commit to a global convention protecting kids might preclude it from telling other countries how they can “Be Best” and champion children. But if there’s one thing the US has always been best at, it’s thinking it knows better than anywhere else.

As the world grows increasingly bonkers (I think that’s the technical term), I find myself drawn to the theory that we all live in a computer simulation that has gone haywire. I’m not the only person inclined to take this view. The “simulation hypothesis” – which posits that we are inhabiting a computer program created by an advanced civilisation – has become something of an obsession in Silicon Valley in recent years. Elon Musk is a particularly vocal proponent of the theory, arguing that the chances we aren’t living in a fabricated reality is “billions to one”. It’s not clear how many billions he’s envisaging, but knowing Musk, I would guess about 420.

One of the founding texts of the simulation hypothesis is a 2003 paper by University of Oxford philosopher Nick Bostrom. However, its roots go back to Descartes. Shakespeare also floated the idea. As the monologue in As You Like It goes: “All the world’s a stage / And all the men and women merely players / In a massive computer simulation / Programmed by our posthuman overlords.”

The theory took a bit of a beating last year when some renowned physicists published a paper arguing that the idea is mathematically impossible, and would require more atoms than exist in the universe. Of course, you would expect something like this to happen in a sophisticated simulation; our overlords would want to ensure we’re not aware of the matrix or we might try to escape. Indeed, it has been reported that two tech billionaires have contracted some scientists to try and break us out of the simulation. The way things are going, I reckon that might be our only hope of finally putting an end to Brexit.

The latest intern opportunity – and this one pays

Ever wanted to spend 30 hours in a “slightly used” coffin? Now you can! Six Flags, a theme park in Missouri, recently announced its “30-hour coffin challenge”; last 30 hours in a 2ft by 7ft coffin and you’re in with a chance of winning $300 (£230). However, if this idea doesn’t appeal, there are other ways to earn money while doing nothing. Nasa, for example, will pay you $15,700 to stay in bed for 70 days while they monitor the effects that staying horizontal has on the body. You’ve got to hand it to Nasa, they have managed to make the dream of lying in bed sound like an absolute nightmare.