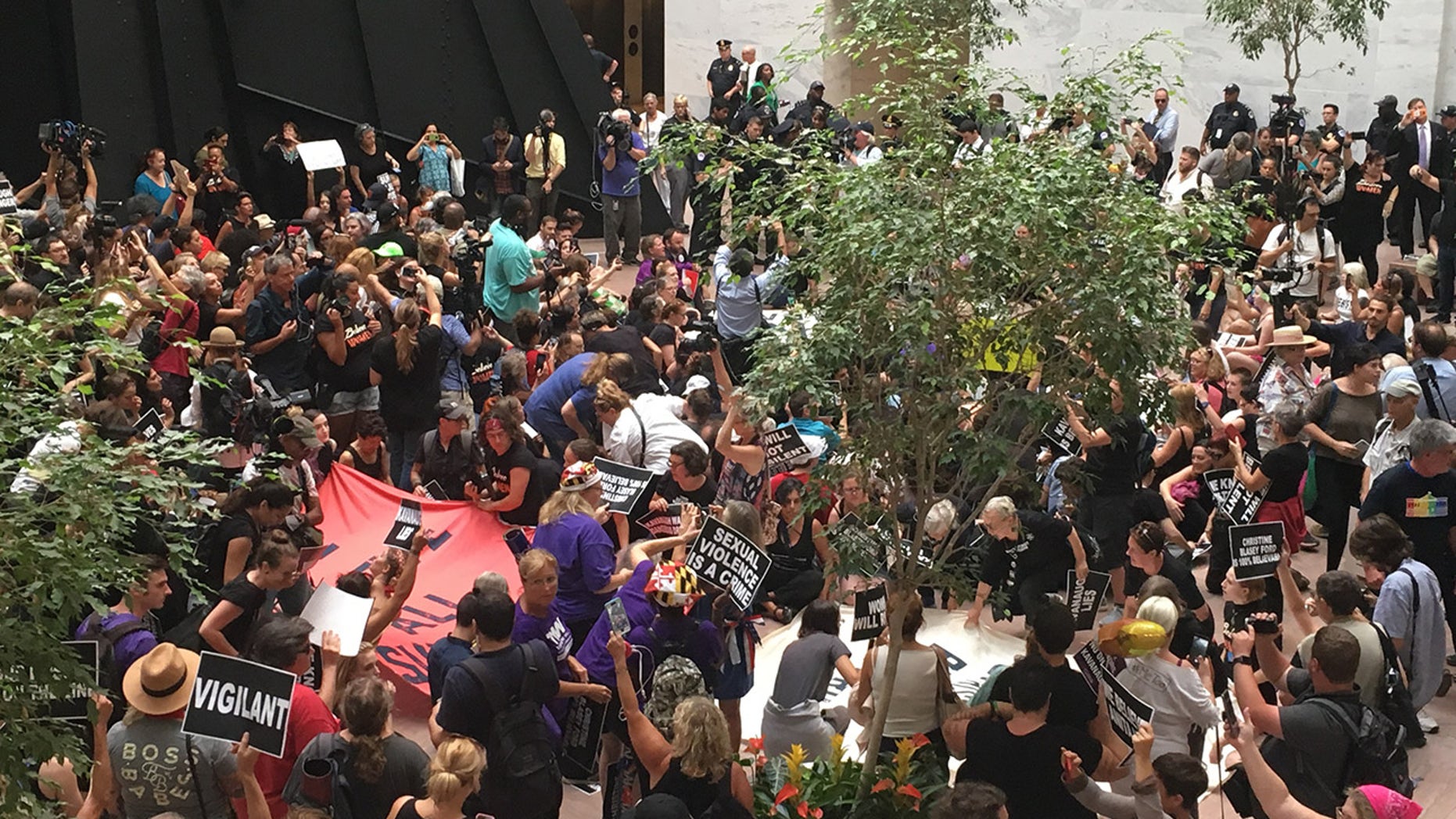 Hundreds of protesters demonstrate against Brett Kavanaugh’s nomination to the Supreme Court in the Hart Senate Office Building in Washington. (NuNu Japardize/Fox News)

Journalists spent last week rewriting history as it happened and denying the thuggery of left-wing protests. It was like watching a reality TV version of “1984.”

President Trump helped get the show rolling when he called left-wing protesters “an angry mob” and Republicans and conservative groups picked up the term. It was repeated in several videos and in a key GOP commercial that highlighted scenes of violence.

The scenes in the commercial included: the rioting and arson that took place protesting President Trump’s inauguration; attacks on Trump campaign events; harassment of members of Congress; and protesters pounding on the Supreme Court doors to object to the Senate confirmation of now-Supreme Court Justice Brett Kavanaugh.

This was all more than the media could stand and they spent the week trying to disprove reality.

The Washington Post ran one piece calling the idea of “the angry mob” a “myth.” Then it did just the opposite by publishing an opinion piece stating: “Why is the mob angry? Because Trump is ripping us apart with bigotry and hatred.” That piece blamed Trump for having “spent the past 18 months actively stoking civil tensions.”

The Post even fictionalized the protests, calling it a “lie” that there were paid protesters. Rejecting that argument, Vice News and Washington Bureau Chief Shawna Thomas admitted “there were people who were paid” protesters.

Meanwhile, the wife of Sen. Rand Paul, R-Ky., revealed that she sleeps “with a loaded gun” by her bed, following the attack on her husband.

Former Attorney General Eric Holder tried out a new Democratic slogan: “When they go low, we kick ’em. That’s what this new Democratic Party is about.”

Former Democratic presidential nominee Hillary Clinton blasted the idea of civility, saying, “you cannot be civil with a political party that wants to destroy what you stand for, what you care about.”

Former Attorney General Eric Holder tried out a new Democratic slogan: “When they go low, we kick ’em. That’s what this new Democratic Party is about.”

CNN anchors Don Lemon and Brooke Baldwin rejected the term “mob” even when guests used it. Baldwin pushed back when the Daily Beast’s Matt Lewis deployed it.

“Oh, you’re not gonna use the mob word here,” she told him. Lewis refused to give in, adding: “It’s totally a mob.”

Baldwin was obviously, hilariously distressed, putting her hands to her forehead and saying: “Let me move past the ‘M’ word” like it’s a word too dirty to even say because of the “weaponization on the right.”

Lemon told Lewis to “shut up” for the same “crime” of saying “mob” in a separate appearance.

2. The Kanye West Freakout: Free thought terrifies the media. Depart from their narrative and they descend on you like vultures. That’s what happened to star entertainer Kanye West this week when he met with President Trump in the White House.

CNN aired insulting comments by guests who said  of West that  this is “what happens when Negroes don’t read” and calling him “the token Negro of the Trump administration.”

Don Lemon described West’s meeting with the president as a “minstrel show” and dared to invoke Kanye’s deceased mother to target the singer, claiming she “is rolling over in her grave.”

It was a hate fest. West was called “laughable” and one of Trump’s “trash black people,” as entertainers piled in their attacks.

One of the common themes was claiming that West was mentally ill. ABC late-night host Jimmy Kimmel blasted him as an “irrational madman.” MSNBC called the meeting “crazy” and “bonkers.”

CNN’s one-time conservative commentator Ana Navarro compared West to Roseanne Barr and urged people in their lives to “get them professional help.”

That’s not how the story got reported. CNN’s Senior Congressional Correspondent Manu Raju mangled what Trump said to make him look like some neo-Confederate: “Here are Trump’s comments tonight calling the leader of the Confederate army a ‘great general’ multiple times.” Raju tweeted a partial transcript more than an hour later after getting criticized.

CNN also posted the video of the story under the obviously spun headline: “Trump: ‘Robert E. Lee was a great general.’” All you have to do is watch the video to realize how badly the story was misrepresented.

This was doubly wrong. In a despicable bit of editing, the video actually never includes Trump’s discussion of Grant. It cuts off right before he starts telling how Lincoln chose his winning general. And whoever wrote the tweet didn’t know enough U.S. history to grasp that Trump meant that Grant, who he alludes to at the beginning, was “incredible.”

Not to be outdone, The Washington Post ran with this headline: “Trump calls on blacks to ‘honor’ Republicans with votes, then praises Confederate general Robert E. Lee.”

O’Rourke has gotten so much favorable press that even the liberal media are mocking it. Politico liberal media critic Jack Shafer criticized the whole fiasco in a piece headlined: “Stop the Press Before It Profiles Beto O’Rourke Again.”

Let Shafer speak for himself here: “Not since the press corps fell in love with Barack Obama in the 2008 presidential campaign has such a sirocco of worshipful candidate profiles and commentaries appeared in the national press.”

Shafer mocked 10 different news organizations, including The New York Times and his own Politico, before skewering No. 11, The Washington Post. “The Washington Post indulged Betomania with a feature, another feature, a column and the sort of ancillary coverage it ordinarily gives the Washington Redskins.”

Yahoo and Elle both wrote about O’Rourke playing with a rabbit. “Here’s a Video of Beto O’Rourke Petting a Bunny to Brighten Your Day,” said Elle.

Dan Gainor is the Media Research Center’s Vice President for Business and Culture. He writes frequently about media for Fox News Opinion. He can also be contacted on Facebook and Twitter as dangainor.