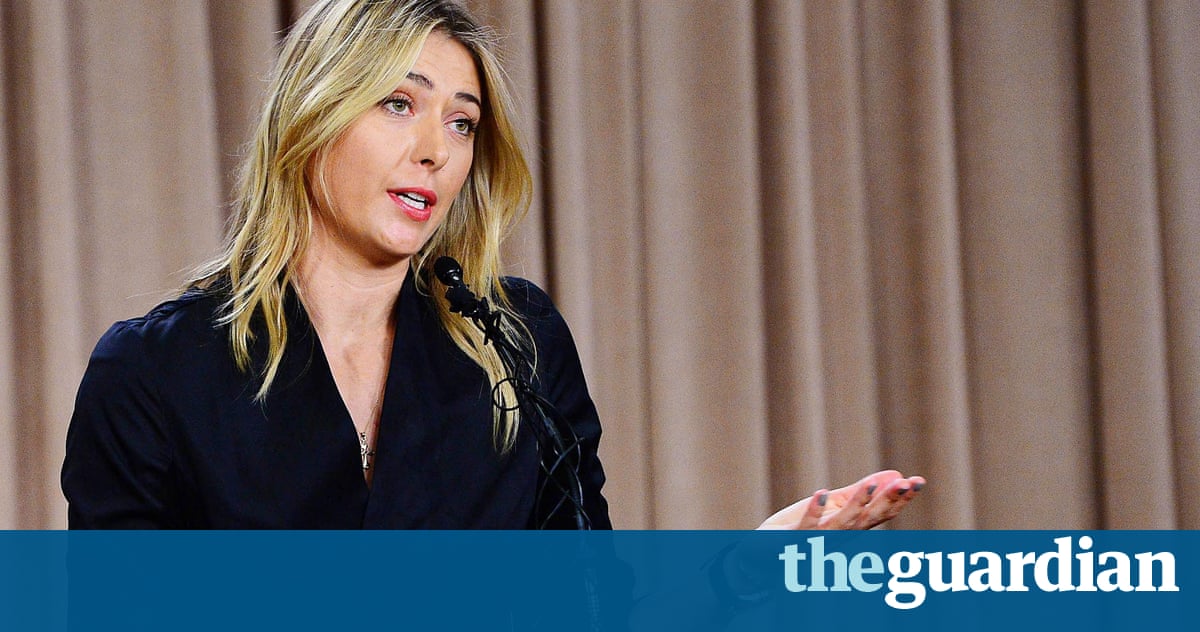 Maria Sharapova, the richest athlete in the history of womens sport, has been banned for two years for failing a drugs test during the Australian Open in January, leaving her illustrious tennis career hanging in the balance.

The 29-year-old Russian who had been provisionally selected to play at the Rio Olympics in August intends to appeal against the decision. But in the likelihood that the ban remains in place, her prospects of reaching the standards that won her five grand slam titles will be seriously diminished by such a long absence.

The ban announced on Wednesday by the International Tennis Federation is deemed to have commenced on 26 January the day she failed a test for the recently banned drug meldonium after losing to Serena Williams in the quarter-finals of the Australian Open. Sharapova has not played since, although she has maintained a high profile at public appearances to promote her confectionery business.

While admitting she had failed the test, Sharapova has maintained since that she took the drug before it was banned and for health reasons only, on the advice of her doctor over a 10-year period. The tribunal found that while she had not intentionally contravened anti-doping rules, she bore sole responsibility for the substance being in her system during the Australian Open and for her failure to notice that the drug had been added to the banned list.

It also found that, whether legal or not, Sharapova had deliberately concealed her use of meldonium from the authorities, who require athletes to declare all frequently used medications, as well as from her own coaches and team.

If she had not concealed her use of Mildronate [the drugs trade name] from the anti-doping authorities, members of her own support team and the doctors whom she consulted, but had sought advice, then the contravention would have been avoided, the tribunal said in its judgment. She is the sole author of her own misfortune.

The tribunal also found evidence in emails to Sharapova from Dr Anatoly Skalny, who had begun treating her in 2004 when she was 17 and continued until 2012, that advised upping her dosage before games of special importance, suggesting an awareness of its performance-enhancing benefits. Having recommended she take two Mildronate pills 1 hr before competition, Skalny continued: During games of special importance you can increase your Mildronate dose to 3-4 pills (1 hr before the match).

Sharapovas management company, IMG Sports, responded with a statement in which she expressed disappointment at the decision and revealed the International Tennis Federation had requested a four-year ban, which would have effectively ended her career.

The tribunal found that I did not seek treatment from my doctor for the purpose of obtaining a [benefit from a] performance-enhancing substance, Sharapova said in the statement.

But the tribunal did find a consistent pattern of evasion around her use of meldonium. It rejected her evidence that she had failed to declare her use of the drug because she believed the rule applied only to substances ingested daily.

Sharapovas statement continued: The ITF spent tremendous amounts of time and resources trying to prove I intentionally violated the anti-doping rules and the tribunal concluded I did not. You need to know that the ITF asked the tribunal to suspend me for four years the required suspension for an intentional violation and the tribunal rejected the ITFs position.

While the tribunal concluded correctly that I did not intentionally violate the anti-doping rules, I cannot accept an unfairly harsh two-year suspension. The tribunal, whose members were selected by the ITF, agreed that I did not do anything intentionally wrong, yet they seek to keep me from playing tennis for two years. I will immediately appeal the suspension portion of this ruling to CAS, the Court of Arbitration for Sport.

The chief executive of the Womens Tennis Association, Steve Simon, said: It is important at all times for players to be aware of the rules and to follow them. In this case, Maria has taken responsibility for her mistake from the outset. The WTA supports the process that the ITF and Maria have followed.

The saga has been a drawn-out affair with many plot shifts since 8 March, the day Sharapova caught the ITF off-guard with an internationally televised press conference at a hotel in Los Angeles in which she admitted she had failed a test for a drug she had known as Mildronate. It was an unprecedented confession.

Sharapova said her family doctor prescribed the drug unavailable outside eastern Europe and not licensed for treatment in the US, where she lives because of a family history of diabetes, as well as an unspecified heart condition. It made me healthy and that is why I continued to take it, she said at the time.

However, the subsequent revelation that scores of Russian athletes had also been taking meldonium did not help her case, and nor did evidence the tribunal found that she had continued to take meldonium after she had discontinued her relationship with Skalny in 2012 but had failed to inform her subsequent medical advisers.

I take responsibility for my professionalism in my job and I made a big mistake, she said on 8 March. I know there will be consequences and I dont want to end my career this way. I really hope I will be given another chance to play tennis again. I cant blame anyone but myself. I have let my fans down.

Her apparent humility could not disguise the depth of her problems. Sharapova responded unconvincingly to the revelation she had been informed at least five times before Christmas that the drug would go on the banned list at the start of the 2016 season, claiming not to have seen emails from the ITF, or to have been informed by her large support team.

While she waited for the ITFs final decision on a ban, friends rallied around her even Williams, as well as Novak Djokovic and John McEnroe but it became clear she was isolated in the wider tennis community. Nike, Tag Heuer and Porsche cut off their lucrative sponsorships although the racket manufacturer Head remained faithful, a decision criticised by fellow client Andy Murray.

At the time of the failed test, Nike said it was putting its eight-year, $70m deal on hold. But in a statement on Wednesday night, it said that it had decided to continue working with Sharapova.

It said: The ITF Tribunal has found that Maria did not intentionally break its rules. Maria has always made her position clear, has apologised for her mistake and is now appealing the length of the ban. Based on the decision of the ITF and their factual findings, we hope to see Maria back on court and will continue to partner with her.