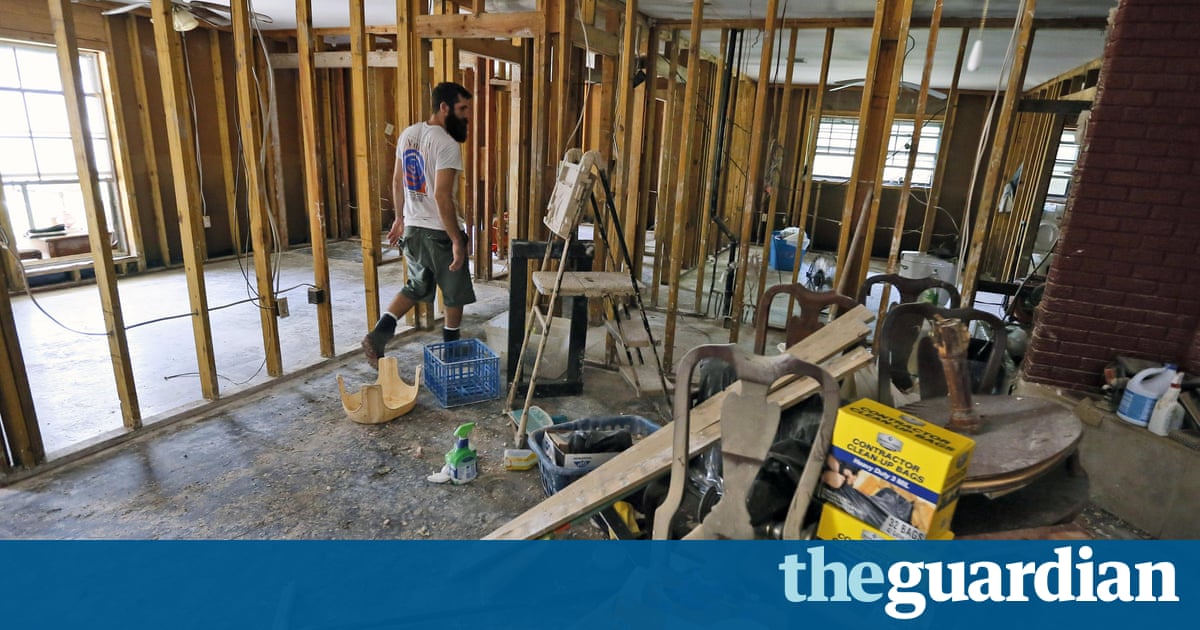 The flooded people of southern Louisiana are losing a race against mold, hunger and homelessness, driving an already insular region into deeper mistrust of the federal government and other outside agencies.

The flood in mid-August was one of the first natural disasters of its scale in the US to unfold in the fully connected world of social media, and many residents are finding that the response of the Red Cross and federal groups has not kept up with the speed of the internet. So residents are turning to technology to organize themselves and, to some extent circumvent the government.

More than 150,000 houses were affected by the flood. On Wednesday, state lawmakers blasted the response from the Federal Emergency Management Agency (Fema) in a House homeland security committee meeting. Congressman Clay Schexnayder said Femas mobile home program has set up just one mobile home in his district.

Were not expediting it fast enough to get these trailers in place. Im confused as to why its taking us so long to do that, he said. Having one trailer set up so far out of all of this, one trailer where Im from I dont call that satisfactory at all.

Julie Ralph of Saint Francisville, Louisiana, said: I know there are some people who lost everything and are getting pretty much peanuts from Fema. Its a drop in the bucket compared to what they lost.

So people are crowdsourcing, she said, bypassing Fema and the government. Ralph created a page on Amazon for donations of supplies such as toilet paper and toothbrushes, which she then distributes through the affected area.

The social media bypass began in the immediate aftermath of the flood, with the instant formation of the Cajun Navy, a group of hunters and fishermen who used their boats to rescue tens of thousands of stranded residents.

They used Facebook and Google maps to pinpoint where people needed help, with locations and detailed information for rescuers like: Rescue urgency: Moderate as of 2am Aug 15. Personal Information: 2 are elderly, 1 has alzheimers and diabetes They are in room over garage.

Its impossible in these still-early days to measure the exact impact of social media on the recovery in Louisiana say, how many Twitter posts resulted in rescues or donations or volunteer hours but government agencies are scrambling to get a sense of it; theyre realizing dialing 911 for help isnt the only option now, or even the fastest.

Emergency responders are studying a group called Louisiana Task Force 1 Urban Search and Rescue Team, or LATF-1, an emergency response team that realized the importance of social media during the floods while others didnt. LATF-1 was a governmental entity that could help, and in many cases, it was the only one responding via social media, team members wrote in an industry debriefing.

During the floods the taskforce started receiving requests for help via Facebook messages, which was unprecedented. After the first message was received LATF-1 leadership made the decision to respond to all messages as they were received, they wrote. That created a logistical nightmare, but along the way they started to develop new tools for social media: ways of streamlining requests, feeding them to other agencies and weeding out false alarms.

On a larger, national scale, technologists are now puzzling over how to use all that data. This years Louisiana flood was one of the first attempts to leverage data from the population and then integrate that data back to a place where the public could use it, according to Government Computer News, a publication for technology experts. The next generation of citizens and community leaders will have the skills and tools to be able to make better informed decisions.

Meanwhile, in Louisiana, people continue to make it up as they go.

Ralph, who distributed supplies via Amazon, said people are now crowdsourcing demolition and repairs. As floodwaters receded and rescue turned to recovery, the Cajun Navy evolved to become the Cajun Army.

As it stands, the boots on the ground are the Cajun Army, Ralph said, and anyone who can be summoned through Facebook or Twitter by people sharing how bad things are to get people to come over and help.

The Cajun Armys volunteers have created a website and its Facebook page has more than 5,000 members, who post requests and responses like this one Wednesday, from Todd Rossnagel in Baton Rouge: Greetings Army. I have someone who needs a hand pulling wet insulation out from under her raised house. Its in Baton Rouge on S Tiger Bend. Please let me know if you can come help out and I can share the contact info.

Three hours later he wrote: I received a phone call thanks.

Together Baton Rouge is a collective of community groups now focused on tearing out damp home interiors.

The group said in a statement Wednesday: Fifteen of the 288 house-gutting requests weve received so far on gutcheckLA.com, or 5% of the total, are living literally sleeping in mold-infested homes. All of those 15 are elderly women, most with medical issues. Projecting that percent out, there are probably between 1,600 and 2,600 people, mostly seniors, in that situation. Thats a public health crisis.

In response, Together Baton Rouge is hiring 100 people for one month, at $15 an hour, to gut 2,000 homes. Donations will cover the quarter-million-dollar cost, they said, and as more donations come in they will hire more people.

Among those affected is Amber Cassady, whose home in Denham Springs has black mold that has bloomed across her ceiling, making the youngest of her five children sick, she said, and her car is completely flooded. Fema said on Wednesday that it is essentially handing out money as fast as it can $202m so far. But Cassady said she was denied a Fema grant because although the water came up to her threshold it didnt enter at the ground floor; instead the rain, pouring at a rate up to 3in an hour, leaked in through her roof.

Now she stays home with the children, ranging in age from two weeks to seven years, because school and daycare are all canceled for the foreseeable future. Her husband, Shane, does auto body work and hitches rides every day.

Fema told me to get a small loan, but I dont have credit. I have a low income, Cassady said on Wednesday. I get depressed because I cant take my kids anywhere and Im scared this mold is going to get us all sick.