Actress Lori Loughlin and her daughters Isabella and Olivia Jade were swept up in the college admissions scandal. (AP)

Giannulli responded by saying that they were “squared away.”

A follow-up email from the official added: “On another note, would you be interested in connecting to discuss your own involvement with USC? So much has changed since you were a student. I’d love to be able to update you on the amazing stuff that’s happening. How about meeting in your area on Oct 3rd, 4th or 5th?”

Giannulli politely rebuffed the offer, noting that he had people that kept him up-to-date. The official responded again with another potentially solicitous offer.

“That’s great! If you’d ever like to discuss the impact your philanthropy or participation in our mentorship programs might have on our students and community, please let me know. Alumni support of cancer research, climate science, social justice programs, and the arts and humanities, among other areas, is critical.”

With that, Giannulli forwarded the exchange to his wife writing, “The nicest I’ve been at blowing off somebody.” 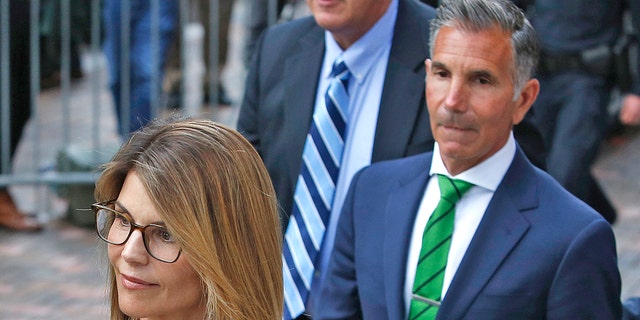 Actress Lori Loughlin and her husband, fashion designer Mossimo Giannulli, are making the case that their alleged bribes to USC were legitimate donations. (Getty)

In a statement provided to Fox News, the university denied offering Giannulli anything out of the ordinary.

“What was being offered to the Giannullis was neither special nor unique. Tours, classroom visits and meetings are routinely offered. The primary purpose of a flag is to be able to track the outcome of the admission review process. It is not a substitute for otherwise being qualified for admission to USC,” the statement reads.

Prior to the email dump, the couple filed a motion for the government to disclose more evidence in the case in an effort for them to prove that the payments characterized as bribes were thought to be legitimate donations. It seems highlighting USC’s admissions practices may play a big part in that defense strategy. However, as “Entertainment Tonight” notes, prosecutors have hinted that the email exchange demonstrates Giannulli and Loughlin rejecting the legitimate approach in favor of working with Singer.

Loughlin and Giannulli previously pleaded not guilty to expanded charges of bribery brought against them in October along with 11 other parents swept up in the scandal. The duo has been accused of arranging a total collective payment of $500,000 to Singer to get their daughters, OIivia Jade and Isabella, recruited to USC as athletes on the crew team.

The charge of conspiracy to commit federal program bribery carries a maximum sentence of up to five years in prison and a fine of up to $250,000. The couple was previously hit with charges of money laundering and conspiracy that could land them behind bars for 40 years if convicted on all of them.