The Turkish lira sank to a record low as concern about souring relations with the U.S. and runaway inflation outweighed the nation’s plans to stem a market rout.

The lira sank about 4 percent, while the iShares MSCI Turkey ETF extended a two-day plunge. The currency had initially pared losses after the government set a growth target of less than 4 percent, down from 5.5 percent. The move represents Treasury and Finance Minister Berat Albayrak’s first whack at fixing the $880 billion economy’s vulnerabilities since a market meltdown sparked by last week’s U.S. sanctions. 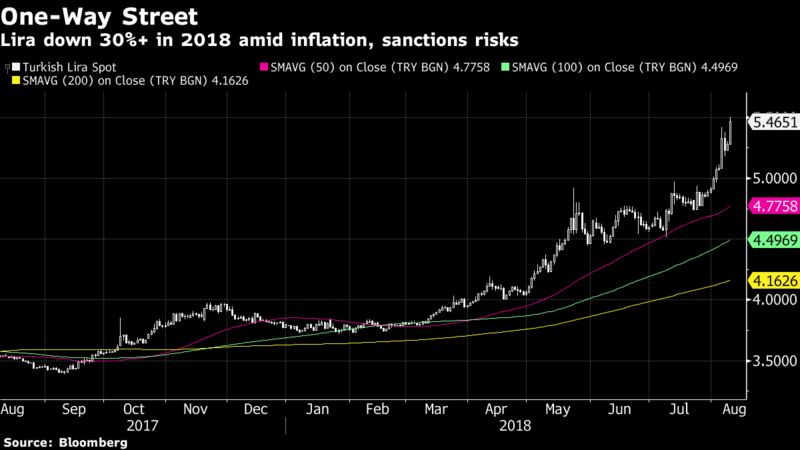 Although it’s good news that Turkey’s new economy czar finally spoke about his plan, investors are skeptical, according to Tim Ash, a senior emerging-market strategist at BlueBay Asset Management LLC in London.

“It’s a case of seeing is believing in terms of delivery,” Ash said. “Albayrak needs to be specific in terms of how exactly he is going to cut the budget deficit this year. It’s great having nice targets, but let’s not forget the Turkish central bank has a 5 percent inflation target and has not met it over the past decade.”

A lower growth target goes to the heart of President Recep Tayyip Erdogan’s dispute with the International Monetary Fund and others warning that the Middle East’s largest economy may have overheated.

Erdogan rejects the notion that slower growth is the answer. He’s a fierce opponent of higher interest rates, and backed a wave of fiscal stimulus in the runup to his re-election in June. He also prides himself on having freed Turkey from the “tutelage” of the Washington-based lender.

“We are entering into a balance-of-payment crisis here," said Cristian Maggio, head of emerging market strategy at TD Securities in London. "It won’t stop unless the central bank steps in and hikes big time."

Turkey’s benchmark one-week repo rate is now 17.75 percent. Maggio said it needs to rise to 30 percent to stem the lira’s rout — if not in one move, then in as many as four smaller increases. The central bank is next scheduled to meet on Sept. 13.

The lira may slide another 5 to 10 percent before recovering to 5 per dollar by the end of the year, according to a report from ABN Amro. The currency has lost more than 30 percent of its value so far this year.

Read more: Erdogan’s Road Map Out of Market Meltdown Is Full of U-Turns (2)

Below are some of the highlights on the treasury’s road map, which Albayrak will flesh out during a briefing at 11 a.m. local time on Friday:

Do these homophobic attacks mean we’ll again have to hide our same-sex relationships? | Amelia Abraham