Over seitan and tofu in New York, the avant-garde performance artist talks about her Buddhism and loss and love for her mother and her late husband Lou Reed 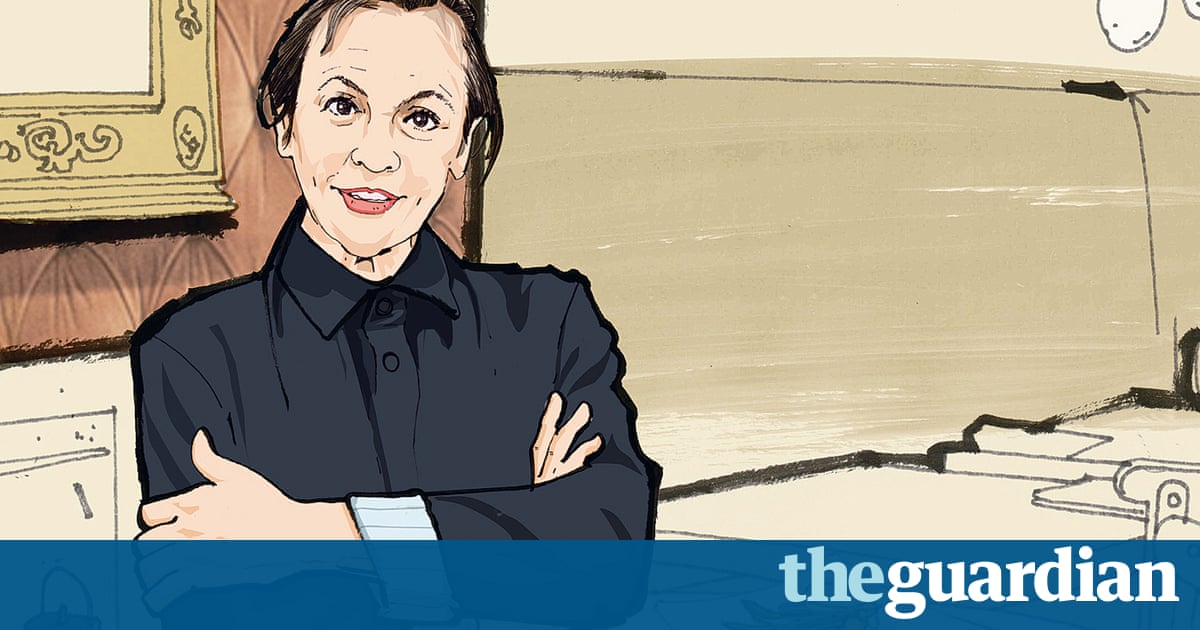 Long after shes left, Ill still be thinking about Laurie Andersons pumpkin-coloured jacket. I see it through the window of the restaurant, this big daub of colour amid all the greys and blacks of a New York winter. Then that colour is inside and here, emerging from it, is Laurie Anderson 69 years old, small, sparkling and wide awake. Her hair, a spiky coronet, stands on end as if permanently electrified by the brain beneath. When shes smiling, which is most of the time, she looks even more impish. The jacket, this big fat orange thing, puffy to the point of spherical, should be plain absurd, but on her I cant help seeing it as extension of her own being. For decades, Anderson has been disarming us with searching and playful work that dovetails these same qualities: the spiritual and the silly. In the early 80s she was hailed as one of the most exciting figures in experimental art and she remains our foremost performance artist, inspiring something so often lacking in avant-garde work humour and affection. Thats certainly the tenor of her most recent work, Heart of a Dog, which the New York Times called a dreamy, drifty and altogether lovely movie. Narrated by Anderson and comprising animated drawings and old home video, its a roaming, looping consideration of various loves and losses: her dog, her mother, and her husband, the musician Lou Reed, who died in 2013. It opens with Birth of Lola, in which Anderson recounts, in detail, a dream about giving birth to her rat terrier. I imagine many women must feel that intense, bodily love for their pet yet its not exactly socially acceptable to admit to it.

Thats why its good to start a film or a book that way, she whispers. Just to kind of go right on out there.

Were in Blossom, a vegan mainstay where Anderson is a regular, even if she isnt, strictly speaking, vegetarian. I have been known to eat steak, she says, although it doesnt happen very often, especially not since she read her friend Matthieu Ricards book, A Plea for the Animals. Hes a Buddhist monk and writer, she says. He just demolishes every single argument that we have for eating meat.

We have a quick look at our meatless menu. I wonder what a soy bacon cheeseburger is! she says, amused. I might get that, it sounds ridiculous. Then again: Maybe theres something thats not pretending to be something else, lets see. They make seitan really well here, actually, I might have that.

And from processed wheat gluten, we somehow easily move to the topic of maternal love. Or lack thereof: in the film Anderson makes the calm revelation that she didnt love her mother. Its true, you know? she says. Women are meant to be all-loving, always no one else is, but women are. I think its even harder for people just to say, My mother didnt love me. Because then youre questioning the whole system.

Did her mother love her?

Anderson grew up in a small town in Illinois, with three sisters and four brothers and, after college in California, made her way to New York where she studied sculpture. By the 70s, shed found her tribe among the avant-garde artists of downtown New York. Her contemporaries included musicians such as Philip Glass and she began experimenting with technology and performance. None of us thought we would ever make a living doing art, she says.

Nor did she ever think she might become a pop star. O Superman, a stark, eight-minute track, based on a Massenet opera,, reached No 2 on the UK singles chart in 1981. To Andersons astonishment, a seven-album deal with Warner Brothers followed. The soundtrack to Heart of a Dog constitutes her 12th album.

And then here comes our lunch.

Oh wow, nicely done! she says, her face lighting up at the two little faux-hollandaise suns of my tofu Benedict. Her seitan isnt quite as pretty but, she assures me after a few forkfuls, its delicious. Food is important to her: I cook not as much as I used to. I used to make lunch all the time for the people at the studio. It was taking a huge chunk of the day so now I have someone else do it, but its really important for us at the studio to eat together.

She often talks about how her work is about stories, and what happens when they are told and retold, and I wonder about the stories around how a widow should grieve. Those stories must be compounded, I imagine, when youre the widow of a public figure. As Im saying this a look of blank confusion comes over her face. Its the word widow.

I know I am a widow but thats not my identity, she says. But it also wasnt my identity to be husband and wife although we were. Partner would be more what I thought.

Reeds death seems to have granted her not sadness so much as a kind of rapture. In an essay for Rolling Stone she wrote: I had gotten to walk with him to the end of the world. Life so beautiful, painful and dazzling does not get better than that. And death? I believe that the purpose of death is the release of love.

Those doors open maybe once in your life, she tells me, or if youre lucky, twice, and you get to see all this stuff. And that door will open again when you have to face your own death, but you get a chance to think about it and see it and feel it. Its overwhelming. It filled me with happiness. I wasnt prepared for that I was supposed to be grief-stricken. Instead, it was kind of an ecstatic experience, and it continues to be. It caused my world to open up, and I understood things or began to understand things in a different way.

For example, were supposedly here eating lunch in some way, but were actually not here, right? and her smile grows wider in invitation. Life is a constant hallucination.

It doesnt surprise me that she speaks about Reed in the present tense.

Lou is the most wonderful person Ive ever met and I think of him all the time and hes completely inspiring to me. I miss him enormously, but theres no point in being sad. I see him all the time, hes always here, a continued, really powerful presence. I think a lot of other people feel the same way because he was such a strong character that just doesnt dissipate that quickly. I just wish I could hear what he would have to say about Trump. That would be something.

For her, the biggest shock of the US election was the misogyny.

People get swayed pretty easily to think what the so-called norm is. So when people are screaming lock her up [at Hillary Clinton] its so hideous. Or hang her I dont think people are outraged enough about that. Almost half the country talking that way.

She admits that this has been a challenge to her Buddhist practice: how do you find loving compassion for someone shouting sexist invective? And yet: I feel guilty what was I doing the last 20 years? Had I noticed that people had slipped out of the middle class? I was saying that to a friend about Trump supporters theyre just hungry. And she said, Yeah, but a lot of them are just assholes who just hate women. Dont try to make it so sweet.

I dont think, though, that Anderson can help that sweetness. Its part of her.

Particularly at the end of your life, she insists, theres always this idea of goodness, you never feel like you deserve it, and the fact is, you do. One of the things that blew Lous mind is the idea that were here to have a good time. Not to suffer. No, to be here for total joy, bliss.

And as we talk a little more about death I start to feel Im cocooned inside a big orange jacket a lifejacket, in fact.