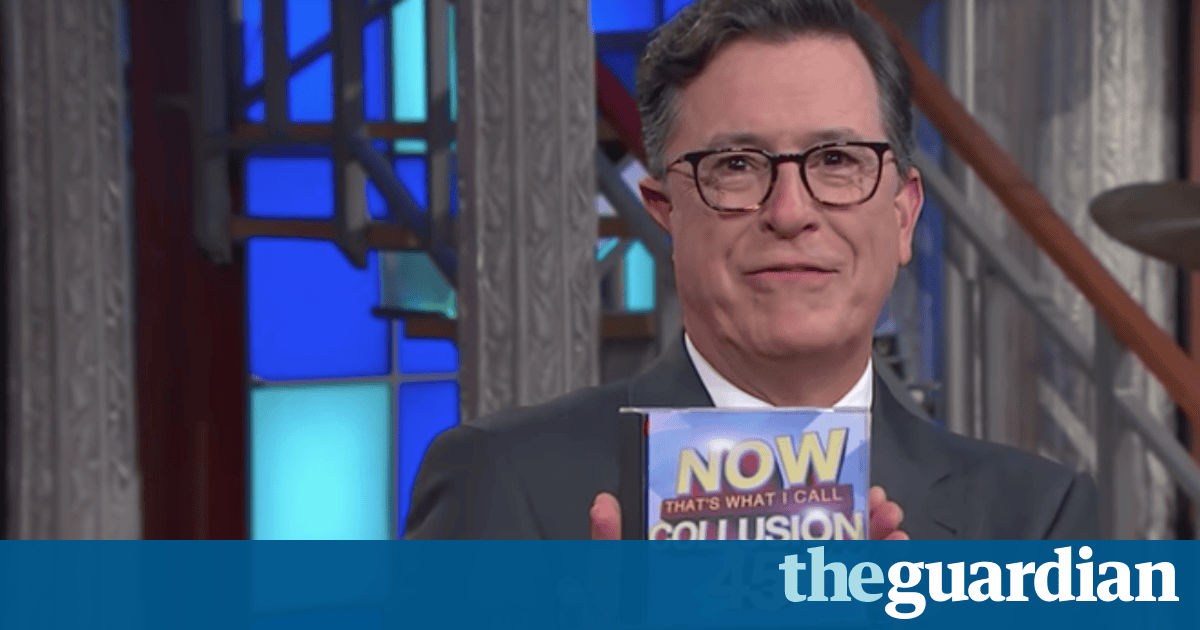 “Things are looking up, especially with the Russia investigation,” Stephen Colbert began. “Special counsel Robert Mueller has been unearthing all sorts of dirt on the Trump campaign’s ties to Russia. And it just came out that Mueller requested documents from the White House related to 13 different areas in which investigators are seeking information, including some of the biggest stories since Trump took office.”

“It’s all collected here on Now That’s What I Call Collusion, Volume 45,” Colbert quipped. “Now, Mueller seems to be closing in on former campaign manager and Dracula’s fun uncle, Paul Manafort. Yesterday, we found out that even though he repeatedly said no contacts with Russians, his emails now reveal that while he was Trump’s campaign manager Manafort offered to give a Russian billionaire private briefings on the 2016 campaign.”

“The billionaire is Oleg Deripaska, who’s among the two to three oligarchs Putin’s turned to on a regular basis,” the host continued. “It’s two to three, depending on who’s been poisoned this week.”

“While Manafort made the offer, we don’t know if these briefings ever happened, and Manafort’s spokesman said these emails just reflected ‘an innocuous effort to collect past debts’,” Colbert explained. “You know, innocuous effort to trade presidential campaign secrets for cash. He was just going back and forth between the man he worked for and the man he secretly worked for.”

“One of the emails contain cryptic mentions of black caviar, which instigators believe is a veiled reference to payments Manafort hoped to receive,” Colbert said. “Either that, or black caviar describes how Steve Bannon reproduces.”

“If you’ve been watching over the past few days, and you haven’t, I’ve found myself in a the middle of a battle over American healthcare,” Kimmel began. “After my son Billy had open heart surgery at the end of April, the senator Bill Cassidy came on our show and made some promises and assurances he did not keep. The reason I had him on the show in the first place is because he started telling people any plan he’d support would have to pass what he called the Jimmy Kimmel test. And then, he teamed up with senator Lindsey Graham to write a bill that most definitely does not pass that test.”

Kimmel continued: “It doesn’t protect people from having their rates priced up for preexisting conditions, it doesn’t prevent insurance companies from putting lifetime caps on how much they’ll spend on a person with medical issues, and it cuts a huge amount of money from healthcare funding.”

Kimmel then showed president Trump’s tweet about the bill, in which he express his support for the legislation and promised again to repeal and replace the Affordable Care Act.

“Those are the key words, repeal and replace,” Kimmel said. “For Donald Trump, this isn’t about the Graham-Cassidy bill, it’s about getting rid of Obamacare, which he hates primarily because Obama’s name is on it. He likes to have his name on things. At this point, he’d sign anything to get rid of Obamacare. He’d sign copies of the Qur’an at the Barnes & Noble in Fallujah if it meant he could get rid of Obamacare.”

“But I do admire what he’s done with most of his life,” the host continued. “He’s a doctor, a gastroenterologist, he founded a community clinic in Baton Rouge. He’s done good things. I just want him to keep doing good things. His plan is not a good thing.”

“We haven’t seen this many people come forward to speak against the bill since Cosby,” Kimmel joked.

Meanwhile, Trevor Noah of Comedy Central discussed the Russia investigation, zeroing in on the ways its subject have so far avoided answering tough questions.

“Over the last few weeks, we’ve seen a barrage of hurricanes hammer the Carribean and the Atlantic coast,” Noah began. “But for the White House, there’s been another storm brewing, one that could also leave them without power. I’m talking, of course, about Hurricane Mueller.

“One of Mueller’s recent targets has been Paul Manafort, Trump’s campaign chairman and undercooked Sylvester Stallone,” Noah joked, showing news coverage of reports that the FBI conducted an overnight raid of Manafort’s home.

“Surprise visits in the middle of the night? All up in his phone?” Noah said. “Ladies, get you a man who wants you as bad as Mueller wants Manafort.”

“I get why Manafort is drawing this much heat, because everything he’s done until now has been shady,” Noah said, with regard to the most recent reports that Manafort offered briefings to a Putin-affiliated Russian oligarch. “Ask yourself this: when has the phrase ‘Russian oligarch’ ever been a good thing? It’s like the word a cappella concert, or unmarked van, or homemade condom.

“Thanks to the Russian investigation, we’ve learned so many new ways to avoid questions. You’ve got Manafort with the stutter step, Mike Pence with the smoke screen, and if you really want to know how to not answer a question, there’s only one man you can go to: Master Spice.”

Noah then showed a clip of Spicer’s recent interview with ABC News, in which he responded to questioning about the Russia prove by saying “I’m not going to discuss that issue at all” four times.

“Did you catch that look at the end there?” Noah concluded. “That’s a man who knows where the bodies are buried.”