Union leaders say measure could allow for better deals between businesses and labor, with benefits making up for potential lower wages 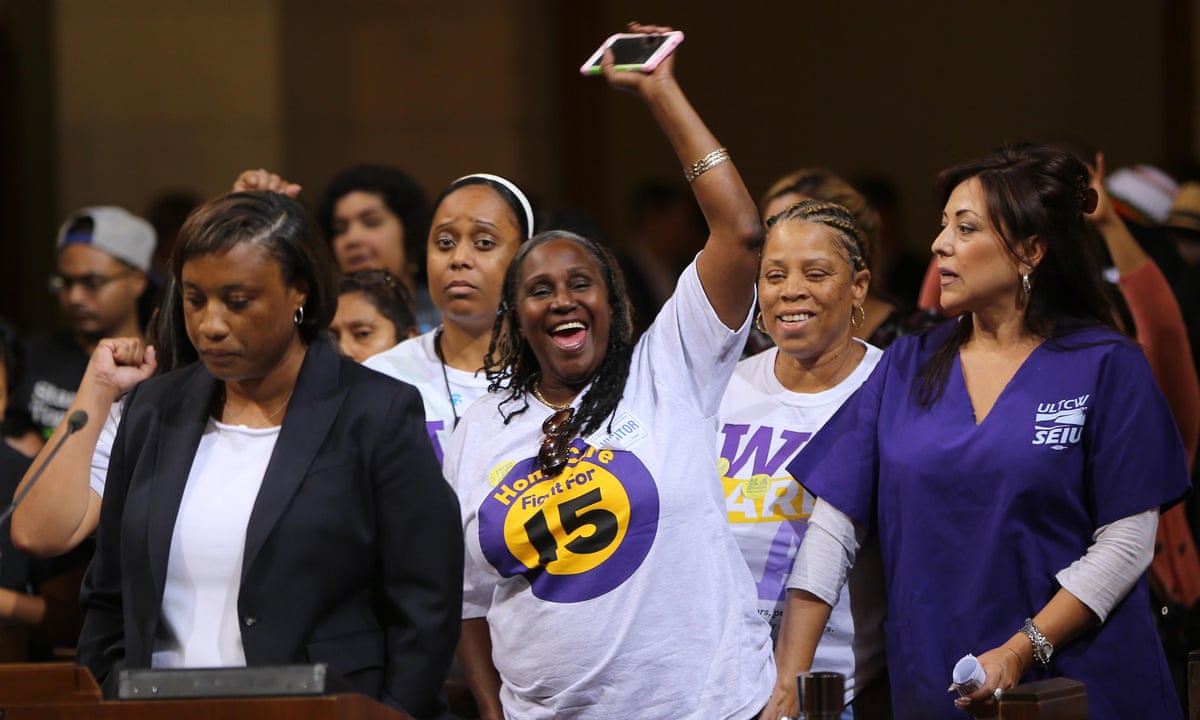 Los Angeles city council will hear a proposal on Tuesday to exempt union members from a $15 an hour minimum wage that the unions themselves have spent years fighting for.

The proposal for the exemption was first introduced last year, after the Los Angeles city council passed a bill that would see the citys minimum wage increase to $15 by 2020. After drawing criticism last year, the proposed amendment was put on hold but is now up for consideration once again.

Union leaders argue the amendment would give businesses and unions the freedom to negotiate better agreements, which might include lower wages but could make up the difference in other benefits such as healthcare. They argue that such exemptions might make businesses more open to unionization.

Because the California governor, Jerry Brown, signed a law raising the state minimum wage to $15 an hour by 2022, workers who are part of the union would see their wages increase eventually potentially two years later than those who are not part of union.

How it came to be

The amendment was originally proposed by Rusty Hicks, executive secretary-treasurer of the Los Angeles County Federation of Labor, AFL-CIO. AFL-CIO is the largest federation of labor unions in the US, with about 12.5 million members. Hicks is also the co-convener of the Campaign to Raise the Wage.

At the time of its passage, Hicks lauded the $15 minimum wage.

We are one step closer to making history in Los Angeles by adopting a comprehensive minimum wage policy that will change the lives of hundreds of thousands of hard-working Angelenos, said Hicks. The city councils action today creates a path for workers to succeed and gives our economy the boost it needs to grow.

Hicks did not respond to a request for comment.

The proposal, however, has come under fire from both the workers and the businesses.

Its pretty hypocritical for unions to push a $15 wage law and then exempt themselves from the policy, Matt Haller, senior vice-president of communications and public affairs at the International Franchise Association, said.

Considering the outcry, Hicks issued another statement last year saying that issues were in need of further review. He also pointed out that other cities in California, including San Jose, Oakland, Richmond, San Francisco, Los Angeles and Long Beach have included similar clauses exempting unions in their wage bills.

Even as unions have argued that these clauses make businesses be more open to unionizations, the US Chamber of Commerce has described them as escape clauses. According to Haller, such exemptions are not likely to inspire more businesses to unionize.

There is a reason union membership continues to decline theyve failed to provide a value proposition for joining to employees at the retail level. Employees see right through the millions of dollars unions are spending on [public relations] campaigns to attack employers who pay good wages and provide opportunities for advancement, he said.

At the end of the day, entry-level employees want to get ahead and create a pathway to the middle class for themselves and their families, not give money out of their paycheck to support the union political agenda, said Haller.

Right-to-work on the rise

States have increasingly been have been revisiting laws that require employees at unionized workplaces to pay a portion described as fair share of union dues even if they do not want to belong to the union. In February, West Virginia became the 26th state to pass a right-to-work law, which says that no employee can be required to pay any portion of union dues if they do not want to.

At the moment, Wisconsins right-to-work law is heading to the states supreme court, where experts expect it to be upheld. On Friday, California teachers asked the US supreme court to rehear their case, Friedrichs v California Teachers Association, about why they should be exempt from paying any portion of their dues. The highest US court heard the case in January before the death of justice Antonin Scalia. The eight justices deadlocked in a four-to-four vote last month meaning that the decision from a lower appeals court that allowed unions to continue to collect mandatory fair-share fees was upheld.

Even as some workers have been fighting not to have to pay any union dues, the labor movement in the US has hoped that the Fight for 15 movement will help increase union membership. At rallies, often organized with help from labor unions like SEIU and AFL-CIO, workers can often be heard chanting demands for a $15 an hour wage and the right to unionize.

Speaking with the Guardian in April 2015, Mary Kay Henry, international president of the SEIU, said that the Fight for $15 campaign was worth the investment.

There is not a price tag you can put on how this movement has changed the conversation in this country. It is raising wages at the bargaining table. Its raised wages for 8 million workers, she said. I believe we are forcing a real conversation about how to solve the grossest inequality in our generation.